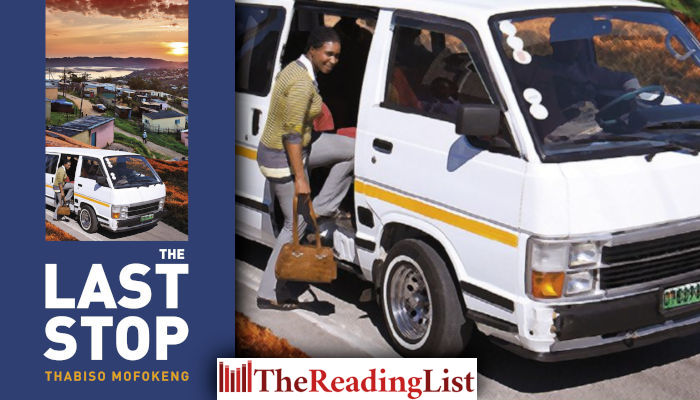 ‘Notice: Close the door nicely when you enter or leave this taxi. Don’t slam the door. Don’t be angry at the door. Please, dear passenger.’

In a world where violent rivalry, and reckless and inconsiderate driving have earned the taxi industry a bad rep, many drivers have had encounters with careless taxi drivers, but how many have actually stopped to consider what it would be like to walk a mile in their shoes.

The Last Stop is a compelling novel that gets right inside the skin of a taxi-driver and his life.

Macko is a man adrift, a taxi-driver with a corrupt boss and a loving but unreliable girlfriend. He does the long-haul run between QwaQwa and Johannesburg, but these days there are voices in his head and visions on the road.

An outbreak of taxi violence sets off a chain of events that threaten to overwhelm Macko, who, after decades in South Africa, is still seen as a ‘foreigner’ and at risk of xenophobia.

Crime fiction featuring paranormal elements, The Last Stop combines gritty realism with the magical. It shows what happens between people in times of taxi violence and deals with themes of lust, betrayal and revenge.

The Last Stop is an engaging and darkly enjoyable read with an incredible plot twist at the end.

Thabiso Mofokeng was born in the Free State. He appears in various anthologies and journals in Sesotho and English. He completed his master’s in Creative Writing with distinctions at Rhodes University in 2015 and has a PhD in English from the University of the Western Cape. He has facilitated various workshops in poetry and prose, he is currently the chairperson of Metjodi Writers and he is the founder of Thabiso Mofokeng Writing Foundation. His magic realism novel The Last Stop was shortlisted for the 2016 Dinaane Debut Fiction Award. His poetry appeared in the Sol Plaatje European Union Poetry Award in 2013, 2015 and 2016. Some of his books are prescribed by the South African Department of Education for grade 8 and grade 10.

Macko got into the taxi, found the money in his pouch, and split it into three parts. For his boss – to deliver tomorrow. For himself – he pushed it into one of his socks. The third share was for Rose. He took it all and got out of the taxi, locked it again. The puppy was waiting for him. It ran after him and watched him enter the house with its sad puppy eyes. He left the taxi key on the fridge and went straight to the bedroom.

Rose took off the blankets that covered her head. She smiled when she saw the money. He gave Rose her share, and put Tabola’s share on the bedside table.

‘Are you joking? Only one hundred for me today?’ Rose sat up in bed, and stared at the two fifty-rand notes.

Macko didn’t reply. He took off his golf shirt and his jeans. He looked at Rose to see if she was watching him. She pretended to be busy with her cellphone, smiling like she was reading her messages. Macko looked away. He slowly took off his maroon dice socks. In them was his share of the money: five fifty rand notes. Two in one sock. Three in the other. He combined them in one sock.

Rose’s eyes were on Macko. She smiled. She would take the money during the night when he was deep in sleep. Or early in the morning, when she got up first to make hot bathing water for him.

Macko folded his socks. He couldn’t wait to take the money to the bank tomorrow as he always did if Rose didn’t take it all. He glanced at Rose, but she was still looking at her cellphone.

‘I am here. I was just sorting Tabola’s money,’ Macko replied.

‘But here is Tabola’s money.’ Rose pointed at the bedside table.

‘Oh, yes. I was just making some calculations,’ Macko stretched and yawned as he got in bed, not looking Rose in the face.

‘Okay. What is wrong with you today?’ Rose asked.

‘Nothing. Nothing. I am fine.’

‘I am asking because you seem jumpy and uncomfortable. I am here for you. You can talk to me freely.’ Rose put her cellphone away and held Macko’s hand.

‘Just unimportant work stuff, babe. You know how our industry works. Just many uninteresting things for you.’

‘Well, today one of our taxi drivers resigned,’ Macko said.

‘Why? In these times of poverty?’ Rose was surprised.

‘Yes, we are the slaves of the taxi owners. We travel these long distances. People are dying daily because of the violence, you know it. We earn peanuts. We have no insurance. Our lives are always in danger.’

‘Okay, I hear you. But even Dodo is thinking about resigning,’ Macko added.

‘Oh, come on! Dodo is a taxi marshal. You can’t compare yourself with him. Do you even hear yourself?’ The pain in Rose’s head increased.

‘Let’s leave this, please. I see you are not feeling well. What is wrong?’ Macko asked, feeling a wash of sympathy for his girlfriend.

‘It’s you who talk too much. Sometimes you think like a sissy.’

It was Macko’s turn to look surprised. ‘But it’s you who asked me.’

Rose brushed Macko’s hand in reply. Macko felt her touch and returned it. She moved her hand to his boxers, but his penis was unresponsive. That was unlike him. Maybe he was stressed. Macko reached for Rose and kissed her. She took off her underwear and rolled onto her side, wriggling up and down, her bottom against the front of his boxers. Macko’s temperature increased to match Rose’s, and she felt his machine getting bigger. ‘Yes!’ she said, turning to Macko. He held his machine in his hand. She went down like something was pulling her. She sucked and sucked. Macko sighed with pleasure. Rose continued to suck, enjoying his erection. She moved up, taking his penis in her vagina, moaning softly. She took the lead, balancing on Macko’s body.

‘Babe, I have something to tell you,’ Macko interrupted, but Rose kept moving on him.

‘I have reached a decision. I want to resign from the taxi industry,’ Macko announced. His machine shrank in Rose’s vagina.

Rose pulled off him and knelt on the bed, her hands on her waist. She glared at him. ‘Where do you think we can get money? Will we pay the rent of this house with your shit?’

‘Calm down. We can maybe go to your parents’ house? And I can look for work there,’ said Macko.

Rose laughed. ‘Now you are being selfish. Instead of working hard so that you can marry me, and stop with this damn cohabitation.’

‘Hear me out! I beg you. This is for us,’ Macko tried to reach for her hand, but Rose jumped off the bed, pulling the duvet and blankets away from him.

She threw them on the floor, leaving Macko naked on the bed.

‘You are useless! Leave that job and see if there will still be an “us”. My mother was right – I should never have found a foreigner.’

Rose took the bedding from the floor and stormed out. ‘Suit yourself! You want to live like this? You will live like this!’ she screamed from another room. Macko threw his pillow at the door.

Rose curled up on the couch, pulling the blankets over her head. She heard Macko’s footsteps.

‘Leave me alone! Don’t you dare come next to me,’ Rose shouted, lifting the blankets and pointing a finger at him.

Naked, disappointed, Macko went back to the bedroom. He hunted for a sheet in the wardrobe, finding two towels and a sheet. He folded his knees and slept.