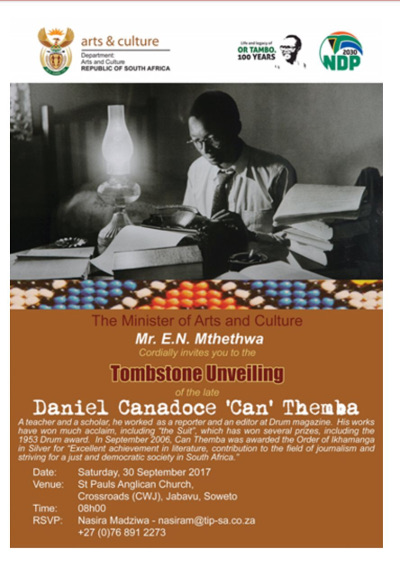 Can Themba’s tombstone will be unveiled in Soweto this weekend.

Themba died in Swaziland 50 years ago. His remains have now been returned to Johannesburg, and the Department of Arts and Culture invite you to the unveiling of his tombstone.

The event will take place on Saturday, 30 September.

To be part of the historic event please see the details above.

Who was Can Themba?

Daniel Canodoce Themba (Can Themba) was born on 21 June 1924, in Marabastad, Pretoria. He grew up partly in the township of Atteridgeville and did his schooling at Khaiso Secondary School, a boarding school situated near Polokwane. He was the first recipient of the Mendi Memorial Scholarship with which he studied at the University of Fort Hare from 1945-1947, graduating his BA degree with a distinction in English. He later returned to University to study towards the University Education Diploma. He worked as a teacher at various schools, including Madibane High in the Western Township, as well as the Central Indian High School in Fordsburg. In 1953 he won the inaugural Drum short story competition and joined the magazine as a reporter and later became the associate editor. He left Drum in 1959 and later went into exile in Swaziland. In 1966 he was banned under the Suppression of Communism Act of 1950. He died of coronary thrombosis while in his flat in Manzini on 8 September 1967. His work was published posthumously in: The Will to Die (1972), The World of Can Themba (1985) and Requiem for Sophiatown (2006). He has received numerous accolades posthumously, including the Order of Ikhamanga in Silver for ‘Excellent Achievement in Literature, contributing to the field of journalism and striving for a just and democratic society in South Africa’, which was awarded by President Thabo Mbeki in 2006.

A page-turning heartbreaker – The Shepherd’s Hut, the new novel from Tim Winton

Don’t miss the launch of As You Like It – Talking gender, social justice and sexuality with The Cheeky Natives