Out now! Across Boundaries by Ton Vosloo, one of South Africa’s most widely admired newspapermen
More about the book! 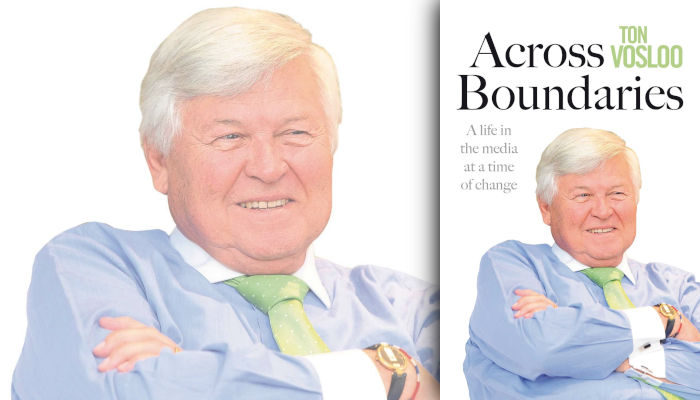 Across Boundaries: A Life in the Media at a Time of Change by Ton Vosloo is out now from Jonathan Ball Publishers.

Ton Vosloo is one of South Africa’s most widely admired newspapermen and businessmen. Under his leadership, Naspers evolved from a print group into a media giant with investments across the world. In his memoir, Vosloo tells the story of his remarkable career, spanning 59 fractious years – years that saw a great many changes in South Africa, in the media and politically.

Born in 1937 in Uitenhage, Vosloo started out writing sports reports for local newspapers while he was still at school. Once he had cut his teeth in newspaper journalism, his career took him to Parliament, where he worked as a parliamentary correspondent, and then on to editing Beeld, the popular Afrikaans daily. In 1970, he was awarded a Nieman Fellowship at Harvard University; it was during this time in the USA that he became increasingly aware of the unsustainability of apartheid.

In 1983, Vosloo was appointed managing director of Naspers and set about vigorously transforming the company. On the commercial front, with Koos Bekker and other media companies, he established M-Net, the country’s first pay-television network. In 1992, Vosloo became chairman of Naspers, with Bekker later succeeding him. Today, Naspers’s story of singular and commercial success continues – a success that has its roots in Ton Vosloo’s stewardship.

Ton Vosloo, born in 1937 and brought up in Uitenhage, started writing sports reports for local newspapers while still at school. He worked as a parliamentary correspondent and in 1970 he was awarded a Nieman Fellowship at Harvard University. He was the editor of Beeld newspaper from 1977-83. In 1984 Vosloo became managing director of Naspers, and he served as executive chair from 1992 to 1997. He was the non-executive chair of the board of Naspers from 1997 to 2015. Vosloo is today the Chair of the Cape Town Philharmonic Orchestra Trust and has been awarded three honorary doctorates.