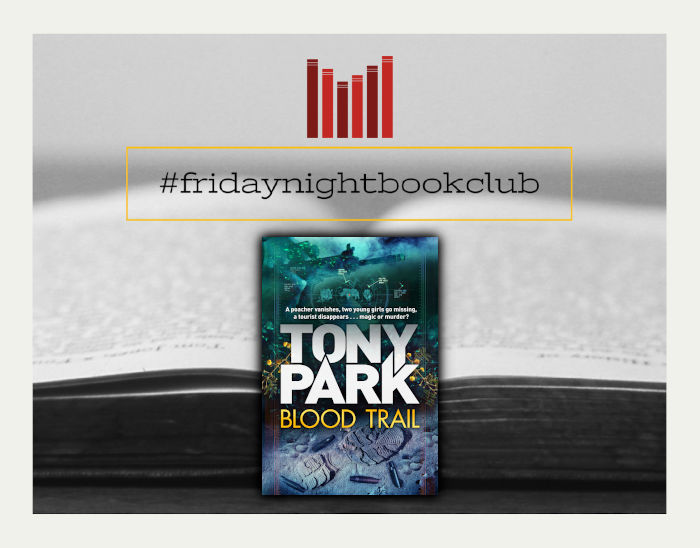 Treat yourself to a glass of wine this evening and this excerpt from Blood Trail, the latest novel from Tony Park.

Evil is stalking South Africa’s Sabi Sand Game Reserve. Viewers around the world are shocked when a live lockdown webcast of a safari game drive exposes them to the brutal reality of rhino poaching. A wily poacher then disappears into thin air, confounding logic and baffling ace trackers Mia Greenaway and Bongani Ngobeni.

Detective Colonel Sannie van Rensburg, still reeling from a personal tragedy, is dealing with an angry community on the border of the Kruger National Park – two young girls have been abducted and the local people fear the children have been taken for use in umuti, sinister traditional medicine practices. Umuti is also being employed by poachers, who pay healers for potions they believe will make them invisible and bulletproof.

When another young girl disappears, this time a tourist, Mia and Sannie must confront their own personal demons and challenge everything they believe, in order to follow a trail that seems to vanish at every turn.

South Africa, in the time of Covid-19

A lion roared outside. The deep, longing call came from the pit of its belly, and made the glass pane of her bedroom window vibrate. Normally, she loved that sound, and, being that close, she might once have found it a bit scary.

As she did up the buttons of her blue uniform shirt, she felt detached, as if she was dressing one of her three children, not that she’d done that for many years. Her youngest, Tommy, her laat lammetjie, was turning thirteen in a month and it wouldn’t be too many years before her late lamb didn’t need her at all. Normally she would wear plain clothes to work, but her washing basket was overflowing.

Sannie started to cry and didn’t bother even trying to wipe away the tears as she buckled her belt and adjusted the holster holding her Z88 pistol on her hip.

She went through to the kitchen. The house was still chilly in the morning, although this winter, which had seemed like it would never end, was slowly, begrudgingly, giving way to the warmer weather, which would bring rain and fresh growth. She put the empty bottle of Nederburg sauvignon blanc from the night before in the bin and rinsed her glass; she did not need more rolled eyeballs from her two sons.

The lion called again, searching for his brother or warning others to stay away. Increasingly, lions were crossing the Sabie River from the Kruger National Park into the adjoining Hippo Rock Private Nature Reserve, a housing development in the bush, where Sannie lived. Many of the houses on Hippo Rock were holiday homes and with their occupants stuck in Gauteng or the Cape or, for the foreign owners, overseas, because of travel bans, the estate had been far quieter than normal during the pandemic. The animals were, literally, taking over.

There was never a good time for a pandemic, Sannie mused as she made herself a cup of rooibos tea and a single slice of toast, hoping it would settle her stomach. The wine had been flowing last night, when she’d been at the home of her friend, Samantha Karandis. Even though sales and transport of alcohol had been banned during South Africa’s draconian lockdown, Samantha had not been miserly and the three of them – Samantha, Sannie and their friend Elizabeth Oosthuizen – had come close to finishing six bottles between them, including the half bottle Sannie had taken home and finished herself, alone.

‘I’ve got a well-stocked cellar, darling,’ Samantha had said, more than once, but Sannie, an experienced police detective, had also noticed the briefest look that passed between the two other women. If Samantha had a secret source of booze then she was surely not the only one in South Africa. Sannie had bigger crimes to worry about.

‘Mom?’ Tommy said behind her, breaking into her thoughts.

She didn’t look over her shoulder. ‘Yes, my boy?’

‘At least turn the light on.’

‘It’s not even six am, go back to bed.’ He might talk to her like a surly teenager, but she still thought of him as her little boy.

‘Lion woke me.’ He went past her to the fridge, took out the milk and swigged it from the bottle.

Normally she would have told him not to be so rude, but there was no normal any more. He was getting taller by the day, looking more and more like his father, and the resemblance would only grow as he filled out. Nature was conspiring to prolong her grief forever. She looked out the window, not wanting him to see her tears, but not caring if he did.

‘Christo will help with your homeschooling today. Do as he says, hey?’

A couple of sullen seconds’ silence. ‘All right, Mom.’

Her middle child, six years older than Tommy, happened to be at home with them. Christo was studying zoology and botany at Wits University and had been doing a practical with the Kruger Park’s veterinarians when the government announced the country was shutting down because of the virus. As the veterinarians’ work was an essential service, Christo was able to stay in the park, or move to and from their house in Hippo Rock at will. He had slept at home last night.

Sannie’s eldest, Ilana, was studying medicine at Stellenbosch University and had decided to stay in the Cape for the lockdown. Inter-provincial travel had recently reopened, throwing a slender thread rather than a lifeline to the tourism operators, but Ilana was prepping for exams.

They’d had a fight last night, she and Tommy, over him spending too much time on the computer. She’d never said so to his face, nor to her husband, Tom senior, but she thought the boy was too English, spoiled by his British father who’d had no other children of his own before meeting Sannie. Ilana and Christo were by her first husband, an Afrikaans detective, like her. She felt guilty, now, that she had ever questioned Tom’s loving parenting, even silently.

She looked at the kitchen window and saw now that he had been watching her reflection. She wiped her eyes for the first time.

Sannie covered Tommy’s hand and gave it a squeeze. ‘I know you do, my boy.’

He forced a smile. ‘I just saw on Facebook that there’s a leopard with a kill at the golf club.’

‘Animals are taking over the place,’ she said.

‘Please will you try and get a picture for me on your way to work, Mom?’

Sannie’s latest posting in the South African Police Service was as the head of the Stock Theft and Endangered Species unit, which was based at the MAJOC – the Mission Area Joint Operation Centre – the headquarters for anti-poaching in Kruger, alongside Skukuza Airport. Sannie and her small force of STES detectives were responsible for crime scene investigation and prosecutions arising from rhino and other poaching incidents. From Hippo Rock it was a fifteen-kilometre drive, through the Paul Kruger entry gate across the river. She liked to get an early start on the day, especially as work was one of the few places where she could busy herself enough to not think too much about Tom. Her daily short cut through the Skukuza staff village took her past the golf club, so she could easily divert there to look quickly for Tommy’s leopard.

The Skukuza golf course, which was open to big game all the time, was being overrun by elephants and other herbivores feasting on the greens now that no one was playing. The predators, too, were arriving in numbers.

Despite a lull in rhino poaching at the start of the lockdowns, crime had been returning with the progressive reopening of the country. Poverty was a perennial problem in the communities that bordered Kruger, but with the collapse of the tourism industry, due to worldwide shutdowns, many more people than usual were unemployed, adding to the police’s problems.

Sannie kissed Tommy. ‘Say goodbye to your brother for me, and tell him I love him.’

Tommy opened the laptop sitting on the kitchen counter.

She held up a finger to him. ‘And do your schoolwork today. No computer games.’

He turned the laptop around to show her the screen, tapping the volume key as he did so. ‘No games, Mom. The Stayhome Safari morning drive’s just started.’

A young white woman with short, dark hair swivelled in the seat of her open-topped Land Rover game viewer and smiled at the camera while an older African man sat on the tracker’s seat attached to the front left-hand fender, watching the bush and the reddening sky. ‘Good morning from sunny, cool South Africa, and welcome to Stayhome Safari, wherever you’re logging on from in the world. I’m your ranger and field guide, Mia Greenaway, coming to you from Lion Plains Private Game Reserve, inside the world-famous Sabi Sand Game Reserve, and behind me is my very talented and knowledgeable tracker, Bongani Ngobeni. Behind the camera today is our Jill-of-all-trades Sara Skjold, all the way from Norway, though stuck here in South Africa these days. Now, let’s go find some lions!’

Sannie shook her head and manufactured a smile for Tommy. ‘Shame, you live in a nature reserve with lions calling and you have to go online to watch them.’

He grinned and he looked so much like his father that she had to wipe her eyes again. ‘Mom?’

She picked up her car keys out of the carved wooden bowl on the bench top. ‘Yes?’

She drew a breath and ruffled his hair. It wasn’t like she was the only one who had experienced loss during the pandemic. People had died; Samantha’s husband John had committed suicide because of his tourism business collapsing due to coronavirus, and Elizabeth’s husband Piet had left her for his secretary and escaped with the woman to Dubai, unable to face the prospect of not seeing his mistress during lockdown. ‘I know.’

As soon as she opened the front door the chill hit her harder. The lion was quiet now, but she knew he – and probably the rest of his pride – was close. She didn’t care. She went to her Toyota Fortuner, clicked the alarm remote, got in and started the engine.

As she drove off, she realised she hadn’t even bothered to check for the lion. Ordinarily, she would have had her powerful torch, scouring the surrounds for danger first.