Join Justice Dikgang Moseneke for an online discussion of his memoir All Rise (18 May)
More about the book! 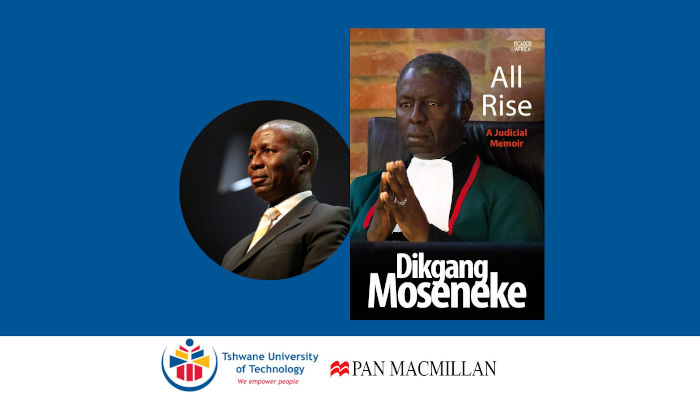 Tshwane University of Technology Student Affairs and Extracurricular Development invite you to a virtual book discussion of Justice Dikgang Moseneke’s book All Rise: A Judicial Memoir.

Moseneke will be in discussion with Professor Mashupye H Maserumule, professor of Public Affairs. Gugulethu Xaba, Director Student Governance and Leadership Development will facilitate the discussion.

Law as a profession was not Dikgang Moseneke’s first choice. As a small boy he told his aunt that he wanted to be a traffic officer, but life had other plans for him. At the young age of 15, he was imprisoned for participating in anti-apartheid activities. During his 10 years of incarceration, he completed his schooling by correspondence and earned two university degrees. Afterwards he studied law at the University of South Africa.

Practising law during apartheid South Africa brought with it unique challenges, especially to professionals of colour, within a fraught political climate. After some years in general legal practice and at the Bar, and a brief segue into business, Moseneke was persuaded that he would best serve the country’s young democracy by taking judicial office.

All Rise covers his years on the bench, with particular focus on his 15-year term as a judge at South Africa’s apex court, the Constitutional Court, including as the deputy chief justice. As a member of the team that drafted the interim Constitution, Moseneke was well placed to become one of the guardians of its final form. His insights into the Constitutional Court’s structures, the personalities peopling it, the values it embodies, the human dramas that shook it and the cases that were brought to it make for fascinating reading.

All Rise offers a unique, insider’s view of how the judicial system operates at its best and how it responds when it is under fire. From the Constitutional Court of Arthur Chaskalson to the Mogoeng Mogoeng era, Moseneke’s understated but astute commentary is a reflection on the country’s ongoing but not altogether comfortable journey to a better life for all.