Join Dr Evert Kleynhans for the virtual launch of Hitler’s Spies: Secret Agents and the Intelligence War in South Africa (4 May)
More about the book! 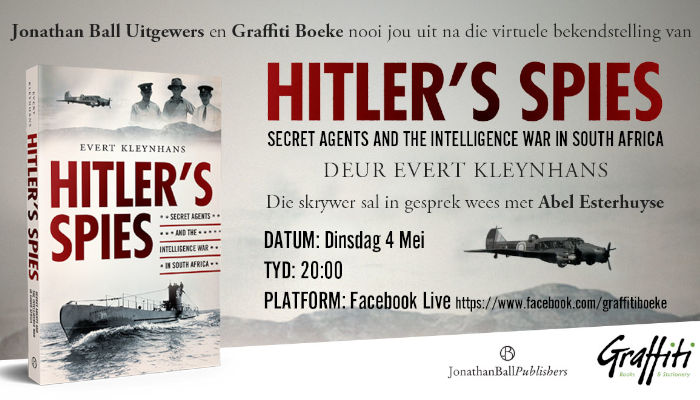 Jonathan Ball Publishers and Graffiti Books invite you to the launch of Hitler’s Spies: Secret Agents and the Intelligence War in South Africa by Evert Kleynhans.

The author will be in conversation with Abel Esterhuyse about his unrivalled account of German intelligence networks that operated in wartime South Africa.

The story of the intelligence war in South Africa during World War II is one of suspense, drama and dogged persistence. In 1939, when the Union of South Africa entered the war on Britain’s side, the German government secretly reached out to the political opposition, and to the leadership of the anti-war movement, the Ossewabrandwag.

The Nazis’ aim was to spread sedition in South Africa and to undermine the Allied war effort. The critical strategic importance of the sea route round the Cape of Good Hope meant that the Germans were also after naval intelligence. Soon U-boat packs were sent to operate in South African waters, to deadly effect.

With the help of the Ossewabrandwag, a network of German spies was established to gather important political and military intelligence and relay it back to the Reich. Agents would use a variety of channels to send coded messages to Axis diplomats in neighbouring Mozambique. Meanwhile, police detectives and MI5 agents hunted in vain for illegal wireless transmitters.

Hitler’s Spies presents an unrivalled account of German intelligence networks that operated in wartime South Africa. It also details the hunt in post-war Europe for witnesses to help the government bring charges of high treason against key Ossewabrandwag members.

Dr Evert Kleynhans is a senior lecturer in the Department of Military History at the Faculty of Military Science at Stellenbosch University. He is the former head of the Records, Archives and Museums Division at North-West University. Several of his articles and chapters have been published in academic journals and books. This is his first book for the trade.