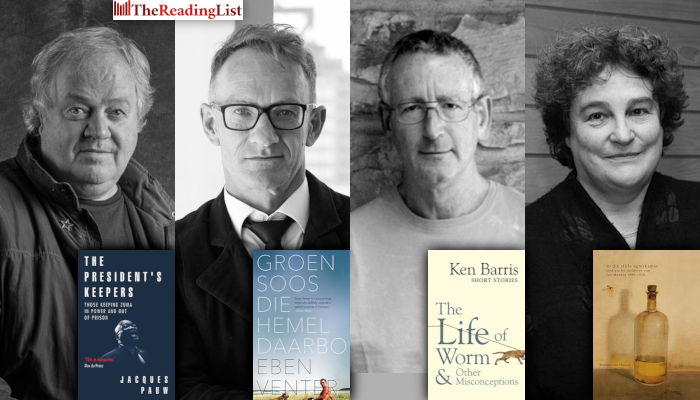 The Media24 Books Prizes recognise the best work published during the previous year by Media24 book publishers including NB Publishers (through imprints such as Human & Rousseau, Tafelberg, Kwela and Queillerie) and Jonathan Ball Publishers.

This year, prizes to the value of R200,000 were awarded in the six categories.

The judges called The Life of Worm and Other Misconceptions an extraordinary collection that combines the mundane with the surreal in illuminating but often deeply unsettling ways. It is a collection that keeps the reader ‘constantly intrigued, amused, repelled and acutely aware of South African realities’.

Also on the fiction shortlist were I am Pandarus by Michiel Heyns and Being Kari by Qarnita Loxton.

According to the judges, The President’s Keepers will be remembered, along with #GuptaLeaks, for the change it brought about in South African society and the ANC. ‘The power of The President’s Keepers lies partly in the explosive revelations it makes, but mostly in that for the first time a broad-based narrative connected the dots between the private and public interests propping up Zuma at all costs. South Africans live in a better country today than a mere eight months ago, partly thanks to Pauw.’

The other titles on the non-fiction shortlist were How to Steal a City by Crispian Olver and Khwezi: The Story of Fezekile Kuzwayo by Redi Tlhabi.

The novel, which explores modern sexuality, intimacy and identity, was lauded by the judges for its finely honed style of writing.

The other books on the shortlist were Die wêreld van Charlie Oeng by Etienne Van Heerden and As in die mond by Nicole Jaekel Strauss.

The collection was described by the judges as ‘a gripping yet meditative reading experience’.