Going Beyond Limitations: Saray Khumalo, the first black African woman to summit Mount Everest, on her book My Journey to the Top of the World
More about the book! 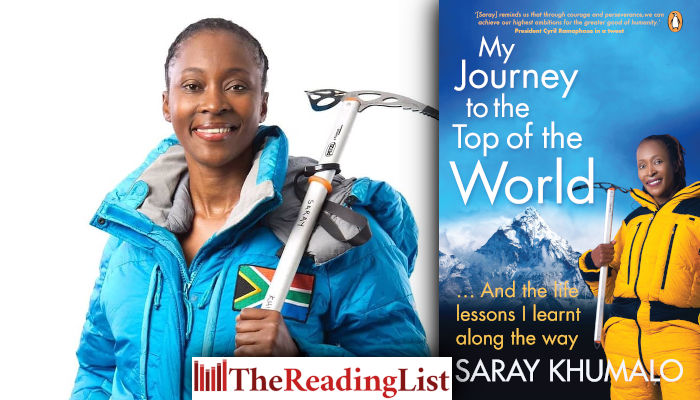 Saray Khumalo was the first black African woman to summit Mount Everest, in a feat that took her four attempts. Many would have called it quits, but for Saray, this was about more than climbing a mountain; this was her purpose, and she would do whatever it took to see it fulfilled.

‘I had wanted to make a big impact, somehow. To make a difference and have a sense of purpose.

‘I had the power to either build up people’s confidence or break it down.

‘I knew this was how I was destined to make a difference in the world.’

Once you know your purpose, you’ll do anything to fulfil it. It helps bring clarity to life, and drives you in that direction, no matter what might get in your way.

It’s not always the most straightforward thing to figure out, though. It comes from a deep introspection into what’s important to you, what you want to be remembered for, and what impact you want to leave on your children and community, long after you’ve left this earth.

Answering those questions in earnest makes it easy to know what it is you need to do and, with the fragility of life, also comes this sense of urgency to get to it. It suddenly becomes easier to let go of the things that are not important – the things that don’t contribute to us fulfilling our purpose – and start making the decisions that put us and our ambitions first.

It was in 2009 that I was forced to take stock of my own purpose when my older sister Florence died suddenly. It was completely devastating, and it prompted deep reflection in me. I remembered my grandfather’s words: ‘If you don’t live a life of service, that’s a life wasted.’ I also recalled my mother’s words: ‘The sky is the limit. Go for what you want. You are everything you need; nobody should tell you any different.’

And I wondered, had Florence actually lived her purpose? Was I living mine? If I was being honest, the answer was no. What followed was a reflective journey, spent thinking about my youth and about what I’d hoped for and dreamt about. I had wanted to make a big impact, somehow. To make a difference and have a sense of purpose. So that’s what I was going to do.

After many months of pushing for that, my journey led me to the position of Employee Number 2 Discovery Bank. Here, I had access to some of the best global behavioural economists and great minds within the group, with a commitment to making South Africa great. I’d finally found the sense of excitement and purpose I’d been looking for.

We were encouraged within our departments to adopt charities, and ours was Kids Haven. We organised fun outings for the kids and, because this cost money, I would go around the office after payday each month asking my colleagues for donations.

It was during this time that a colleague of mine mentioned she was going to climb Mount Kilimanjaro with her friend and her sister. I’d had the idea to do it myself, ever since an American guy who’d done it had planted the seed in my mind in 1996. With no serious limitations holding me back, I knew my moment had come.

At the same time, I still had Kids Haven on my mind, and it struck me that we could combine the two in a fundraising effort. My Kilimanjaro climb in December 2012 was the early beginnings of Summits with a Purpose, a foundation I started in 2013, using my climbing expeditions to raise funds for literacy and educating young people, while uplifting economically marginalised communities in Africa. I couldn’t have imagined then how the cause would take off, particularly during my expeditions to Mount Everest.

I had taken on Everest three times before summiting on my fourth attempt in 2019. I felt such a strong sense that we can all go further and higher than we imagine, a feeling that I’ve retained and have wanted to impart to younger people – they can go above the clouds; in fact, that’s where they should be.

While I hadn’t thought about what my achievement might have meant to others, when I returned to SA, I saw that people were actually listening to what I had to say. I realised that I had the power to either build up their confidence or break it down. So, I made it my mission to become the type of person to stretch out a hand to lift others up. To show them that they could also do what I did, and more, becoming their own kind of superhero.

Are there going to be bad days? Definitely. But it’s about waking up every day knowing it’s another chance to try again. Even if you take one step, that’s okay; you’re working your way up slow and steady, and that’s what matters. If I could look up at Everest from Camp 4 on my third attempt, with tears in my eyes, thinking, So close, yet so far, and still go back a fourth time to make history, then anything is possible. You just have to keep stepping.

In putting My Journey to the Top of the World together, I was transported through the wild ride of emotions I felt with every expedition. There was the anger when people questioned what I was doing there as a black woman. The defiance in going back time and time again to show them that I – that we – can do it. The pride, because I did it and I paved the way for another African child who can go through the same lifechanging experience, but without the stigma.

I revisited how me not giving up changed people’s perspectives. There was the German climber I met on Argentina’s Mount Aconcagua who, for the rest of his life, will look at my people differently, because I summited and he didn’t. And on a more personal level, with my sons. My eldest told me after I summited I’d proved to him that nothing replaces hard work. He has this optimism now around what he’s able to do in his own life because I took that extra step in mine.

I had wondered along the way, through all the times I was forced to turn back without summiting, and almost losing my life, whether climbing was really how I was supposed to make a difference to the world. But it was, and I knew it. I’d faced impossible challenges, and overcome them. And after those that tripped me, I got right back up and held my mistakes closely to make sure I did better next time.

Through being authentically me, doing what I love and playing to my strengths, I’ve been a part of raising R2 million through 12 climbing expeditions for Summits with a Purpose since that very first Kilimanjaro climb in December 2012. Small steps may not have meant a lot in the moment, but for me, they were a giant leap in more ways than I could have ever imagined.

My Journey to the Top of the World by Saray Khumalo is out now.