Friday Night Book Club: Read an exclusive excerpt from The Girl Who Reads on the Métro, the French phenomenon by Christine Féret-Fleury
More about the book! 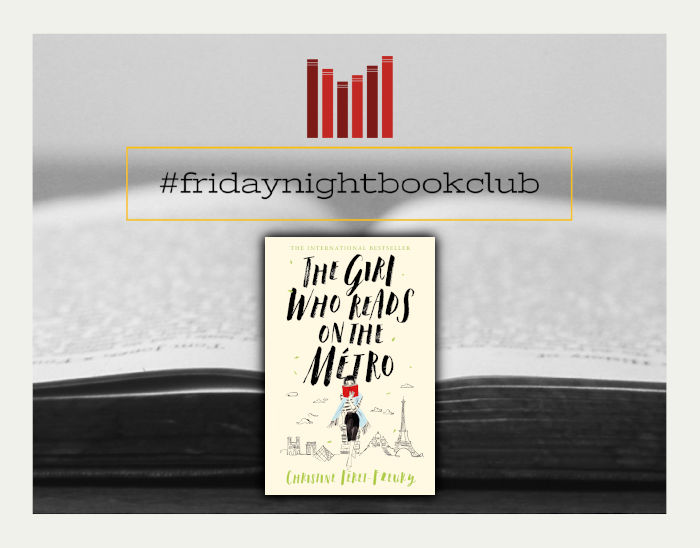 Staying in this evening? Get comfortable with a glass of wine and this exclusive extract from The Girl Who Reads on the Métro by Christine Féret-Fleury, translated by Ros Schwartz.

The Girl Who Reads on the Métro is the French phenomenon ready to charm book-lovers everywhere, for fans of The Little Paris Bookshop and The Elegance of the Hedgehog.

When Juliette takes the métro to her loathed office job each morning, her only escape is in books – she avidly reads on her journey and imagines what her fellow commuters’ choices might say about them.

But when, one day, she decides to alight the train a few stops early and meets Soliman – the mysterious owner of the most enchanting bookshop Juliette has ever seen – she is sure her life will never be the same again …

For Soliman also believes in the power of books to change the course of a life – entrusting his passeurs with the task of giving each book to the person who needs it most – and he thinks Juliette is perfect for the job.

And so, leaving her old life behind, Juliette will discover the true power a book can have …

The man in the green hat always got on at Bercy, always via the doors at the front of the carriage, and then exited via the same doors at La Motte-Picquet-Grenelle, exactly seventeen minutes later. At least that was on days when the stops, warning signals and clanging were regular, the days that weren’t exceptionally overcrowded, when there weren’t any accidents, terror alerts or strikes, and no unscheduled stops to regulate the service. Ordinary days. The days when you feel as though you’re a cog in a well-Oiled machine, a huge mechanical body in which each person has their place and their part to play, willingly or not.

On those days, Juliette would take refuge behind her butterfly-framed sunglasses and her chunky scarf knitted by Granny Adrienne in 1975 for her daughter. The two-and-a-half-metre scarf was a faded blue, the colour of distant peaks at seven o’clock on a summer’s eve, not just anywhere but in the Pyrenean town of Prades gazing towards Mount Canigou. And she would sit wondering whether her existence in this world was any more precious than that of the spider she’d drowned that morning in her shower.

She didn’t like doing it – aiming the jet at the small, black, hairy creature and watching out of the corner of her eye as the spindly legs flailed in panic and then abruptly folded in on the body. Then the spider would whirl around, as light and inconsequential as a wisp of wool plucked from her favourite sweater, until it was sucked down the plughole which she immediately stopped up, jamming in the plug.

Serial murder. Every day, the spiders crawled up, emerging from the pipes after a wobbly climb. Were they always the same ones that, after being flushed down into the murky depths – the bowels of the city like a vast reservoir of teeming, stinking life – unfolded themselves, came back to life and embarked on another ascent invariably destined to fail? It was hard to imagine. Juliette saw herself as a pitiless but negligent divinity, too busy most of the time to fulfil her role, intermittently guarding the gates of Hell. What were the spiders hoping for once their feet were on dry land, so to speak? What journey had they decided to undertake, and with what purpose?

The man in the green hat could perhaps have given her the answer if Juliette had dared ask him. Every morning, he would open his briefcase and take out a book covered in thin, almost transparent paper, also of a greenish hue. He’d unfold its corners with slow, deliberate movements, then slide a finger between two pages already separated by a strip of the same paper, and begin reading.

The title of the book was: A History of Insects Useful to Man, Animals and the Arts, with a Supplement on How to Destroy Pests.

He would caress the mottled leather cover, its spine decorated with thin gold lettering, the title standing out against a red background.

He’d open it, bring it closer to his face, and sniff it, his eyes half- closed.

And then he’d read two or three pages, no more, like a food-lover eating cream pastries with a tiny silver spoon. A happy, enigmatic smile appearing on his face–the kind that Juliette, fascinated, imagined as that of the Cheshire Cat in Alice in Wonderland.

That smile always faded at Cambronne, giving way to an expression of rueful disappointment; he would then re-Fold the paper, put the book back in his briefcase and snap it shut. And stand up. Not once did he look at Juliette, who, sitting opposite him–or standing, huddled against the shiny pole polished each day by hundreds of gloved or ungloved palms–devoured him with her eyes. He would patter off, very upright in his overcoat buttoned up to the neck, with his hat cocked over his left eyebrow.

Without that hat, without that smile, without that briefcase in which he shut away his treasure, Juliette probably wouldn’t have recognized him. He was a man like any other, neither good-looking nor ugly, neither attractive nor repulsive. A little portly, of uncertain age, or rather, a certain age, to speak in clichés.

Or rather, a reader.

‘What are you on about?’

Juliette, who was humming, jumped.

‘Oh! Nothing. A sort of counting rhyme … I was trying to remember the names …’

‘I’ve received the Energy Performance Certificate for the Boulevard Voltaire apartment,’ said Chloe, ignoring Juliette’s words entirely. ‘Have you got the folder?’

Juliette nodded after a moment. She was still thinking about the man with the green book, about insects, about the spider she’d drowned that morning.

She pivoted her chair, pulled a binder from the shelves that covered an entire wall of the office, and slipped the documents inside. The binder, she noted, was piss-yellow. How awful it looked. The whole bulging wall, bristling with labels coming unstuck at the corners, seemed as if it was about to collapse on top of her like a mudslide. Juliette closed her eyes, imagining the swashing sound, the gas bubbles popping on the surface – and the smell. She pinched her nose hard to quell her mounting nausea.

‘You’re not pregnant, are you?’ her colleague pressed her.

‘Of course not. I was just wondering how you cope with working opposite that … The colour’s so disgusting.’

Chloe stared at her, wide-eyed.

‘Disgusting …’ she repeated slowly. ‘You’re bonkers. They’re just binders. They’re ugly, I agree, but … are you sure you’re OK?’