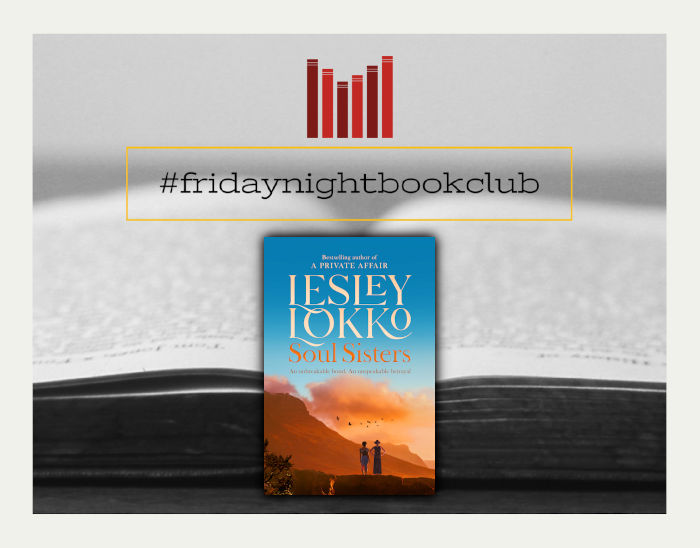 An unbreakable bond. An unspeakable betrayal.

Treat yourself to a glass of wine this evening and this excerpt from Soul Sisters by Lesley Lokko – a rich, intergenerational tale of love, race, power and secrets.

Since childhood, Jen and Kemi have lived like sisters in the McFadden family home in Edinburgh, brought together by a shared family history which stretches back generations. Kemi was educated in Britain alongside Jen and the girls could not be closer; nor could they be more different in the paths they take in life. But the ties that bind them are strong and complicated, and a dark family secret exists in their joint history.

Solam Matsunyane is from South Africa’s black political elite. Handsome, charismatic, charming, and a successful young banker, he meets both Kemi and Jen on a trip to London and sweeps them off their feet. Partly influenced by her interest in Solam, and partly on a journey of self-discovery, Kemi, now 31, decides to return to the country of her birth for the first time. Jen, seeking an escape from her father’s overbearing presence, decides to go with her.

In Johannesburg, it becomes clear that Solam is looking for the perfect wife to facilitate his soaring political ambitions. But who will he choose? All the while, the real story behind the two families’ connection threatens to reveal itself – with devastating consequences …

Robert McFadden, aged thirteen, pressed his ear flat against the wooden panelling and strained to hear the conversation taking place on the other side of the wall. ‘You cannot be serious,’ his mother said, her voice tight with outrage. ‘Where is she?’

There was a moment’s silence, then his father’s voice came through the wall. Weak and placating. ‘Well, that’s just the thing … she’s, er, here.’

Robert frowned. It had been a strange week. His father, who had been away in Africa for most of Robert’s life, was finally back. For good. But Mother seemed about as pleased to see him as she was to see the gardener. Or the coalman. Or the old hunchback who delivered vegetables once a week. Not pleased, in other words. Knowing Margaret McFadden, it wasn’t altogether surprising. Robert’s quiet, stern character, somewhat disconcerting in a child of thirteen, came almost exclusively from his mother, or so everyone said. She’d married ‘down’ – that was the word everyone used. For a time, Robert thought it meant ‘Africa’; ‘down there’, as the servants kept referring to it. After a while, however, he grasped the true meaning of the word. It had to do with money, of which his mother had plenty and his father absolutely none. No one seemed to understand how or why they’d married in the first place and, since he was an only child, there was no one to ask, no one with whom he could speculate. All he knew was what Mrs Guthrie, the housekeeper, had told him in those odd moments when she’d relaxed sufficiently to pour herself a wee dram and ease off her shoes. His mother was the daughter of a Rhodesian landowner, originally from Scotland, who’d been travelling with his wife and two young daughters from Salisbury to Johannesburg when their train derailed and they were stuck for a week in Marula, a tiny mission station just south of Bulawayo where his father was stationed. He loved hearing the words. Bulawayo. Marula. Gweru. In Mrs Guthrie’s mouth they took on an even more exotic ring. ‘Bool-ay-waay-oh.’ He’d looked it up on the map. He found it impossible to imagine his mother in anything other than the high-necked, stern dresses with full skirts, stockings, boots and sometimes even a tie that she wore year-round, even on the odd day when the sun shone brightly in Edinburgh and the air turned misty with heat and haze. Whatever had transpired in that week in the middle of darkest Africa, Margaret Strachan returned to Scotland betrothed. He was aware too that the word ‘return’ had a certain ironic ring to it. Before she’d set foot in the house in Abercromby Place, purchased for her and her new husband by an overly grateful father, she’d only once been to Scotland. She’d grown up on a sprawling estate in Rhodesia, had been home-schooled by her mother, an Englishwoman of her time and class, and as a result, sounded about as Scottish as the Queen, whom she adored. Unlike her husband, whose Glaswegian accent was as irrevocably wedded to his vocal cords as his tweed suits were to his frame, there appeared to be little of Scotland in the woman, and vice versa. Every chance she could, she boarded the steam train for London, taking Robert with her. When Robert was nine, she’d outraged everyone by declining to send him to Fettes College or George Heriot’s, which was where his cousins had been sent. Instead, she sent him to Eton. When he first heard the news, he was secretly relieved. Neither school inspired anything more than outright dread. Fettes with its gloomy Gothic spires and George Heriot’s with its turrets and cold, stone facade seemed more like prisons than schools. He much preferred Eton. The endless playing fields, the smiling house matron, and the fact that he was four-hundred-odd miles away from the frosty atmosphere of 3 Abercromby Place was enough to assuage any homesickness he might otherwise have felt. By the age of thirteen, he sounded for all the world exactly like all the other English boys in his year … there was nothing Scottish about him, which pleased Margaret no end but seemed to upset and astonish his father. In truth, it mattered little. He so seldom saw or heard from his father that by the time George McFadden returned to Edinburgh, Robert, who was on holiday from school, hardly recognized him.

‘And what’m I to do with her?’ he heard his mother ask frostily. He pressed his ear even harder against the wall.

‘Employment?’ His father might as well have blasphemed. ‘What sort of employment?’

There was a moment’s hesitation. ‘Well, she could join the other servants … in the house?’

‘The house?’ His mother’s voice rose. ‘In our house? Whatever will people say? A Negro serving girl in this house?’

‘Robert McFadden! What in heaven’s name are ye doing?’ He jumped guiltily. It was Mrs Guthrie, on her way to light the drawing room fire.

‘Eavesdropping, that’s wha’ ye’re doin’! Runaway wi’ ye, afore I tell yer mither.’ Mrs Guthrie glowered down at him. Robert needed no second warning. He fled. His mother would take an extremely dim view of his eavesdropping. As he galloped up the stairs to his room on the third floor, two at a time, he wondered who they’d been talking about. A Negro. A servant girl, too, by the sound of it. Who was she and how had she come to be in Edinburgh, in his home?