Friday Night Book Club: Read an excerpt from The Other Bennet Sister by Janice Hadlow – a novel that will delight Pride and Prejudice fans 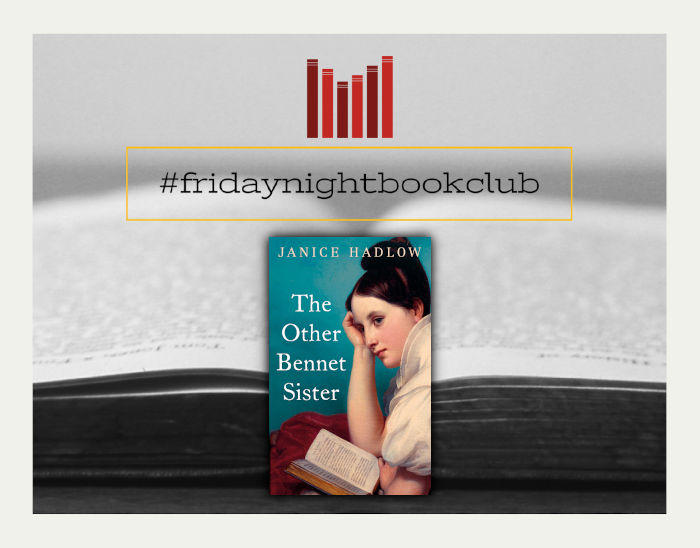 Staying in this evening? Get comfortable with a glass of wine and this extract from The Other Bennet Sister by Janice Hadlow.

For fans of Jane Austen’s Pride and Prejudice, The Other Bennet Sister tells Mary’s story …

It is a sad fact of life that if a young woman is unlucky enough to come into the world without expectations, she had better do all she can to ensure she is born beautiful. To be handsome and poor is misfortune enough; but to be both plain and penniless is a hard fate indeed.

In Jane Austen’s Pride and Prejudice, Mary is the middle of the five Bennet girls and the plainest of them all, so what hope does she have? Prim and pious, with no redeeming features, she is unloved and seemingly unlovable.

The Other Bennet Sister, though, shows another side to Mary. An introvert in a family of extroverts; a constant disappointment to her mother who values beauty above all else; fearful of her father’s sharp tongue; with little in common with her siblings – is it any wonder she turns to books for both company and guidance? And, if she finds her life lonely or lacking, that she determines to try harder at the one thing she can be: right.

One by one, her sisters marry – Jane and Lizzy for love; Lydia for some semblance of respectability – but Mary, it seems, is destined to remain single and live out her life at Longbourn, at least until her father dies and the house is bequeathed to the reviled Mr Collins.

But when that fateful day finally comes, she slowly discovers that perhaps there is hope for her, after all.

Simultaneously a wonderfully warm homage to Jane Austen and a delightful new story in its own right, Janice Hadlow’s The Other Bennet Sister is, at its heart, a life-affirming tale of a young woman finding her place in the world. Witty and uplifting, it will make you feel – and cheer – for Mary as you never have before.

It is a sad fact of life that if a young woman is unlucky enough to come into the world without expectations, she had better do all she can to ensure she is born beautiful. To be poor and handsome is misfortune enough; but to be penniless and plain is a hard fate indeed.

Four of the five Bennet sisters of Meryton in Hertfordshire had sensibly provided themselves with good looks enough to be accounted beauties in the limited circles in which they moved. Jane, the eldest, was the most striking, the charms of her face and figure enhanced by the unassuming modesty of her character. Elizabeth, the second sister, made up in wit and liveliness for any small deficiencies in her appearance; while Catherine and Lydia, the two youngest, exhibited all the freshness of youth, accompanied by a taste for laughter and flirtation, which recommended them greatly to young men of equally loud and undiscriminating inclinations. Only Mary, the middle daughter, possessed neither beauty, wit, nor charm; but her sisters shone so brightly that they seemed to cancel out her failure and, indeed, eclipse her presence altogether, so that by the time they were grown, the Bennet family was as regarded as one of the most pleasing in the neighbourhood.

It was common knowledge, however, that the Bennet girls’ prospects were to be envied a great deal less than their beauty. At first sight, the family appeared prosperous enough. They
were the principal inhabitants of the village of Longbourn; and their house, solid and unremarkable as it was, made up in comfort what it lacked in pretension. There were servants to wait at table, a cook in the kitchen, and a man to tend the gardens; and though Mr Bennet’s possessions were not extensive, they were quite enough to sustain his credit as a private gentleman. Few of the families with whom they were intimate were sufficiently rich or genteel to condescend to them with confidence, and the Bennets were regarded, in public at least, as eminently respectable ornaments to Hertfordshire society.

But in the country, no family’s business is ever truly its own, and everyone knew that the outward prosperity of the Bennets rested on very uncertain foundations. Their property was subject to an entail which restricted inheritance to male heirs; if no Bennet son was produced, the estate would pass eventually into the hands of Mr Bennet’s cousin. At first, this had seemed of little significance. As baby after baby arrived at Longbourn with promising regularity, surely, it was only a matter of time before the much-anticipated Bennet boy put in his overdue appearance. But when the tally of girls reached five, and it was clear no more children could be expected, the entail cast a deepening shadow over the family’s happiness. On Mr Bennet’s death, his widow and daughters would be left with nothing but five thousand pounds in the four per cents, and a humiliating reliance on the uncertain charity of a distant and unknown relative. Their friends were not without sympathy for the Bennets’ plight, but that did nothing to dampen their curiosity about what was to come, for what could be more compelling than to watch at first hand the probable wreck and dissolution of an entire family’s fortune?

Mr Bennet refused to gratify his neighbours by displaying any obvious disappointment at the cruel trick of fate which had deprived his dependants of the security he had once so confidently expected them to enjoy. To the world at large, he remained what he had always been: detached, amused, and apparently resigned to an outcome it was not in his power to change. To his family themselves, he seemed barely more concerned. Perhaps in the long hours he spent in his library, he wrestled with himself to find an answer to their plight. If so, he shared neither his anxieties nor his conclusions with them.

His wife, however, had none of his restraint. Mrs Bennet thought of little else but the hardships which lay in store for herself and her daughters when Mr Bennet was dead, and she was often to be heard lamenting the wickedness of the entail, both at home and abroad. Her nerves, she declared, were not equal to the strain placed upon them by such an unfortunate business. How anyone could have had the conscience to entail away an estate from their daughters she did not profess to understand; but unless something was done about it, ruin must engulf them all. She was a woman of no great intelligence and small imagination, but she possessed considerable powers of energy and application, which she devoted with all the tenacity at her command to finding a solution to their predicament. She was soon persuaded that there was only one answer to the miserable situation in which her girls were placed: they must marry, as quickly and as advantageously as possible. If their father could not secure his daughters’ futures, they must look to a husband to do so.

To have seen her daughters married to men of merely respectable means would have soothed away many of Mrs Bennet’s fears; but to imagine them united to husbands of ample income and substantial property was for her a joy undimmed by frequent contemplation. Nothing made her happier than to think of them in possession of elegant houses and rolling parkland, certain of never hearing the dreaded word entail again. She was aware, of course, that wealthy men in want of wives were not easy to find and harder still to catch, especially by girls without large dowries. But she was undaunted. Her daughters, she believed, possessed an advantage that would enable them to triumph over all difficulties: other girls might be rich, but her daughters were beautiful. This, she was sure, was the blessing that would deliver them into wealth. Their looks would attract men of the first eligibility, dazzling their eyes, winning their hearts, and persuading them to ignore the promptings of cold, mercenary common sense. It was for Mrs Bennet an article of faith that, in the absence of ten thousand pounds in the hand, a pretty face was the single most valuable asset a young woman could possess.

Her own experience confirmed her opinion, for, some twenty-five years before, it had been Mrs Bennet’s youthful beauty which had swept a besotted Mr Bennet to the altar, overcoming all obstacles that appeared to stand in the way of their union. As he gazed on her handsome face, it had meant nothing to him that her father was merely a country attorney who kept an office in Meryton, or that her brother lived within sight of his own warehouses in Cheapside. He had been determined to marry her, and against all advice to the contrary, he had done so. On the whole, Mrs Bennet considered herself well satisfied with the outcome. It was true that Mr Bennet was a whimsical man who teased her more than she thought proper. But as mistress of Longbourn, she presided over a property large enough to gratify her vanity, while her husband’s rank assured her the pleasure of patronising her less-fortunate acquaintances on every possible occasion. For Mr Bennet, however, the benefits of his marriage were far less apparent. His failure to consider whether his spouse’s character was likely to bring him as much pleasure as her appearance had more serious and lasting consequences. The shallowness of Mrs Bennet’s mind, and the limited nature of her interests, meant theirs could never be a partnership of equals. She could be neither his companion nor his friend. Her beauty had been enough to win him, but, as Mr Bennet soon understood, it was not enough to make him happy.

Fortunately for Mrs Bennet, she was not a reflective woman, and if her husband now regretted the principles on which he had made his choice of a wife, she remained oblivious of this fact. As a result, her prejudices survived unchallenged. She esteemed no qualities of female character other than beauty. Wit and intellect, kindness and good humour mattered not at all to her. Good looks trumped every other attribute. In her daughters, she valued nothing so much as their power to please.

With four of her girls, Mrs Bennet had, in this respect, every reason to be satisfied. Of Jane she entertained the highest possible hopes, for, as she frequently observed to Mr Bennet, she could not have been born so beautiful for nothing. Three further sisters, if not quite as generously blessed as Jane, were still, in Mrs Bennet’s opinion, sufficiently distinguished to attract notice wherever they went. Only one of her daughters had failed her. Mary had made the mistake of inheriting neither the looks nor the charm shared by all other female members of the Bennet family. This was a sin for which, in Mrs Bennet’s eyes, there could be no forgiveness, as Mary herself had quickly discovered.