Fighting and Writing: The Rhodesian Army at War and Postwar – a robust and contentious conversation about race and difference
More about the book! 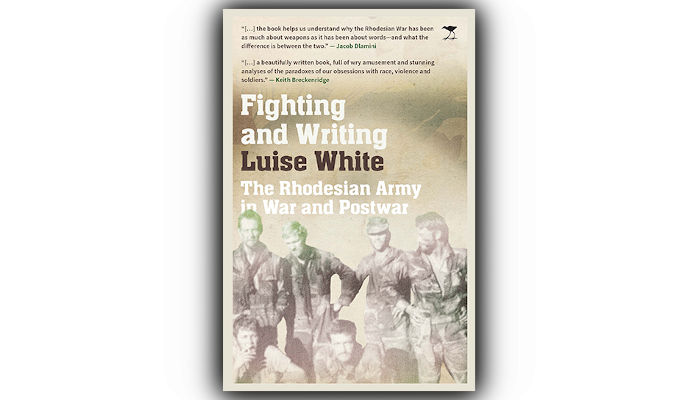 Fighting and Writing: The Rhodesian Army at War and Postwar by Luise White is out now from Jacana Media.

In Fighting and Writing, White brings the force of her historical insight to bear on the many war memoirs published by white soldiers who fought for Rhodesia during the 1964–1979 Zimbabwean liberation struggle.

In the memoirs of white soldiers fighting to defend white minority rule in Africa, White finds a robust and contentious conversation about race, difference, and the war itself.

These are writings by men who were ambivalent conscripts, generally aware of the futility of their fight – not brutal pawns flawlessly executing the orders and parroting the rhetoric of a racist regime. Moreover, most of these men insisted that the most important aspects of fighting a guerrilla war – tracking and hunting, knowledge of the land and of the ways of African society – were learned from black playmates in idealised rural childhoods.

In these memoirs, African guerrillas never lost their association with the wild, even as white soldiers boasted of bringing Africans into the intimate spaces of regiment and regime.

‘Fought as much across shifting battlelines as it has been over publication deadlines over the years, Rhodesia’s bush war has long been shrouded in white segregationist make-believe and African nationalist mythmaking. With characteristic brilliance, Luise White takes us past these frayed but tangled lines and asks a series of pointed questions: What was Rhodesian about this conflict? […] and what, ultimately was this war about? Did the white men who fought for a country called Rhodesia and the whites on whose behalf these men went to war believe that they could win? If they did not, what, then, did they fight for? […] Fighting and Writing offers salutary lessons about how to write about war without falling for the self-serving stories that soldiers like to tell. More than that, the book helps us understand why the Rhodesian War has been as much about weapons as it has been about words – and what the difference is between the two.’ – Jacob Dlamini

Don’t miss the launch of The Educated Waiter: Memoir of an African Immigrant by Tafadzwa Z Taruvinga at Exclusive Books Rosebank