Don’t miss the virtual book launch of Rogues’ Gallery by Matthew Blackman and Nick Dall, in conversation with Andrew Feinstein (25 Mar)
More about the book! 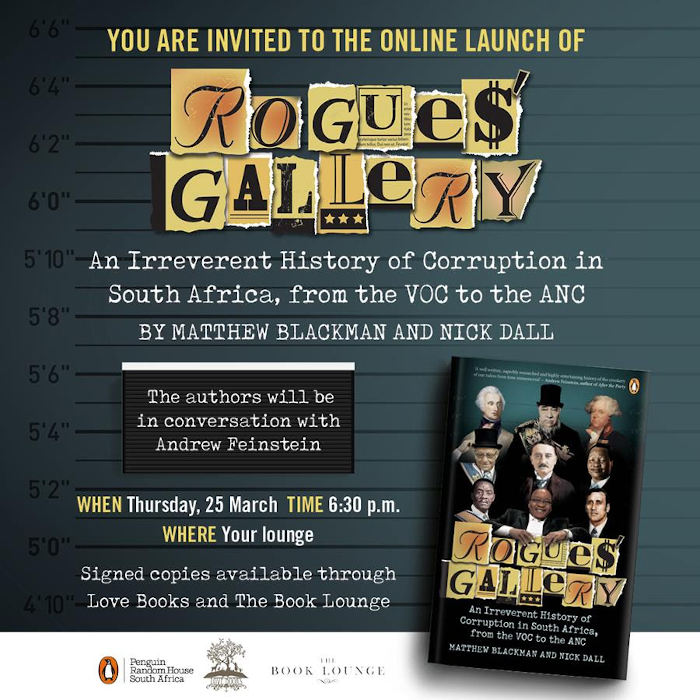 Penguin Random House invites you to the online launch of Rogues’ Gallery: An Irreverent History of Corruption in South Africa, from the VOC to the ANC by Matthew Blackman and Nick Dall.

The authors will be in conversation with Andrew Feinstein.

Signed copies available through Love Books and The Book Lounge!

If you reckon corruption in South Africa began with Zuma or even with apartheid, it’s time to catch a wake-up call. Rogues’ Gallery tells the story of some of the biggest skelms to grace our (un)fair shores, showing that dodgy dealings have been a national pastime for as long as South African history has been written down.

Readers are then treated to apartheid’s finest feats in corruption: from the Broederbond’s perfect ten in state capture to the Department of Information’s peddling of fake news and the apartheid state’s manufacture of – no, not illegal cigarettes – Class A drugs! And let’s not forget the hotbed of corruption that was the ‘independent’ homelands. Add to this a few murders, plenty of nepotism and a state president who started out as a Nazi spy, and the gallery of rogues is complete. On the flipside, every chapter also features at least one brave whistle-blower – the true heroes of this book.

Irreverent, entertaining and impeccably researched, Rogues’ Gallery busts the myth that the Zuptas were the first to capture the South African state, showing that corruption has always been around – and that the tricks politicians play haven’t changed a jot.