Dip into an excerpt from T.C. Farren’s new novel The Book of Malachi, a gripping thriller with a speculative twist
More about the book! 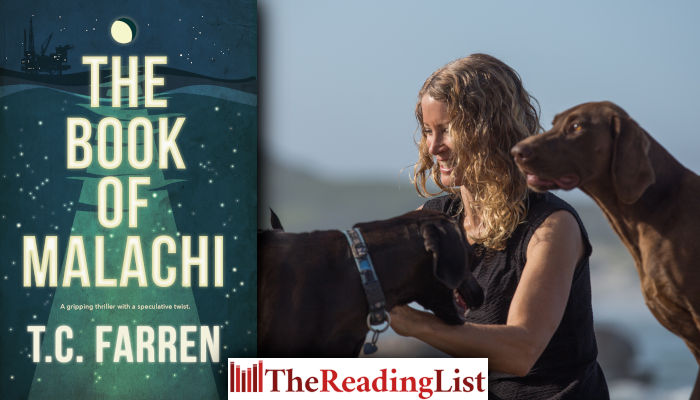 Kwela Books has shared an excerpt from The Book of Malachi by T.C. Farren.

Malachi Dakwaa is mute and utterly disconnected from human beings when he gets an extraordinary job offer. In exchange for six months as warder on a top-secret organ farming project, Frasier Pharmaceuticals will graft a new tongue for him. Malachi takes the deal.

Far out to sea, he finds himself among war lords and mass murderers of the kind who maimed him and murdered his family.

But are the prisoners as evil as Frasier says? Do they deserve their fate?

As doubt starts to grow, Malachi is faced with a terrible dilemma. Must he leave them to this medical nightmare or risk his life and set them free?

Malachi may have no tongue, but his voice is one readers will never forget – sharply ironic, vividly descriptive and leavened with humour. He is a compelling guide through the twists and turns of this novel, a gripping thriller with a speculative twist.

T.C. Farren’s novel Whiplash was shortlisted for the Sunday Times Fiction Prize and won a White Ribbon Award from Women Demand Dignity for its activism against women and child abuse. Whiplash was turned into a movie titled Tess, which won Best SA Feature Film at the 2016 Durban International Film Festival. Farren lives in Cape Town.

It is not so comfortable, this factory ship. From the top I see narrow passages, sharp corners intended for servicemen, not polished pearls with supple skin. But Meirong pours herself down the steep stairs, suddenly a Chinese gymnast trained in sullen concentration, reserving her smiles for an outright win. I follow easily. I am a runner by night, luckily, my stomach is like steel. We are dropping down some kind of thoroughfare between the two wings of the rig, down narrow flights with skinny railings, our descent marked by bright, reliable rows of silver rivets punched against the sea. We move silently, two agile apes through the man-made trees.

Meirong pauses at a door to the right that says, Private. Keep out.

‘Strictly out of bounds for maintenance crew.’ Her eyes shoot black bolts. ‘That’s you.’ She launches down again, stops at a door in the left wing. She speaks without even catching her breath. ‘Here we are. Maintenance.’

The door emits a rusted screech. We walk along a corridor painted with thick yellow paint like congealed egg yolk. We pass some closed doors, then a room with benches and a table bolted to the metal floor. I glimpse two thin streams of sunlight filtering in near the roof, the only openings to the sky I have yet seen.

Further down the corridor, Meirong taps at a door. ‘Your living quarters.’

She walks straight past any chance of leisure, leads me deeper into the building until I hear a low hum that might be the pressure of the sea. The sound gets louder, begins to ring like a soft, suppressed joining of voices. Just before the door at the dead end of the long corridor, Meirong swings up a set of spiral stairs.

At the top, computer screens cover two walls. The third wall is a window into falling space, the glass as thick as the crocodile tanks at the Tantwa River. Far, far below the yellow ceiling is a craving and a pulse; I sense it with the hairs at the back of my neck. I look away, try to focus on the screens, but my eyes refuse to understand the images I see – fluorescent light flung onto metal mesh, a sheen of human skin. That is all. I am not ready yet.

A young black man sits at a desk bristling with keypads and switches. His dreadlocks swing as he spins in his chair, jumps up to meet us. He has thick, wild eyebrows and an untidy patch of hair on his chin. His one eye is light brown, the other holds a splinter of green. His genes must be uneven. He grins.

I offer him a careful smile, lock my teeth behind my lips.

‘I’m Tamboaga.’ He glances at Meirong. ‘From Zim.’

‘Tamba’s here for a kidney.’

I nod in sympathy. Only then does the movement in the computer frames draw me in.

I gasp inwardly, try to understand the high-res pixels.

They are naked, all of them. An array of bent necks with long, dishevelled hair. They are all colours. A deep cocoa, here the ebony of the equatorial regions, here clay, here pink. Beards sprout on the men. A glimpse of black bush between their legs, tired and thick. A penis lolling, a breast swung to the side. Humans in cages.

Meirong says, ‘Forty of them, sourced from prisons all around Africa. After three cycles, they go back to their justice systems. We grow the organs inside them for six weeks, give them two weeks to heal. We’ve done one harvest with this lot. We start again on Thursday.’

I trace the patterns on their skin from pressing on bare metal, the deeper, longer gashes with puncture marks where a needle has passed through and pulled tight. Stitches.

With horror I count the wounds on a huge black man. Two cuts per cycle. One to go in. One to come out. Will there be blood?

‘Tamba runs the wiring and piping from up here.’ Meirong points through the thick glass. ‘Do you see how it works?’

Massive chains run inside steel tracks in the ceiling. Two rows of metal hooks dangle near the roof. Abbatoir hooks, but bigger.

I step towards the window, let my eyes plunge downwards.

Two rows of cages on curved cradles, bolted to the floor. Beneath each row, a twisted umbilicus of wires and pipes emerges from the floor, threads through the u-shaped cradles, drops away again.

I see no blood from this glass station. Beyond the thick mesh, all I see is the hair on their heads. I see shoulders, elbows. Here and there I see toes.

There are only a few women, but they are barely living. They will not waken my strange, sick libido.

‘This is a very sophisticated system.’ Meirong spins slowly, takes on a computer glow. She speaks with sincere pride. ‘A Chinese engineer set it all up for us.’

Tamba rolls his eyes at me.

And me, Malachi? Naturally I am speechless.

At the bottom of the spiral stairs, the murmuring returns. I recognise the sound now: it is the muted pulse of a foreign crowd. At the refugee centre in Zeerust, the people sheltered beneath the hum, sipped their sugary orange drinks, unwrapped their bread with their fingertips as if it might take fright and fly.

It is only now I realise that the people on the screens were completely silent. The subjects were suffering in mime.

Meirong stops before the door at the dead end. Through the steel, the wind of their breathing scrapes at the fine hairs in my ears.

‘The last maintenance man was a failure.’ Fury strikes her marble eyes. ‘The recruitment agent fucked up. Listen carefully, Malachi. The first rule for you is no communication. If you communicate, you’re out. And that agent,’ contempt curls her top lip, ‘will be fired.’

Now I see why Susan Bellavista was so excited by my inability to speak.