Zapiro returns to FanCon in Cape Town! (28 April)
More about the book! 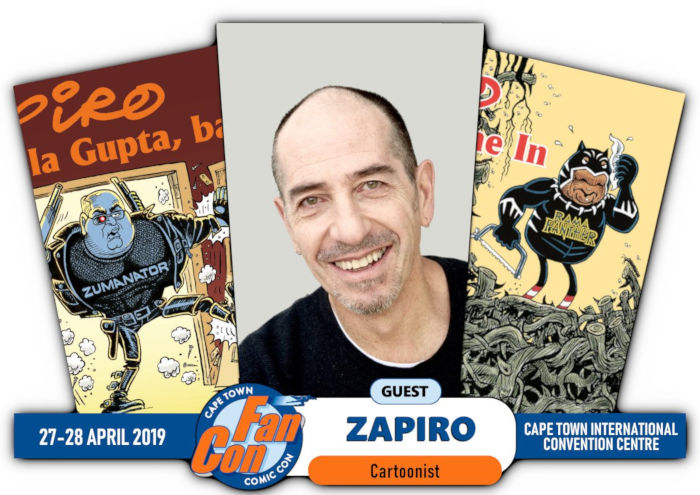 FanCon is a comic convention held in Cape Town. The event will take place from 27–28 April 2019 at the Cape Town International Convention Centre.

Zapiro will be available for panels, signings and meet and greets on Sunday only, but the Zapiro booth will be open over both show days.

Born in 1958, Zapiro went through architecture at UCT, conscription, activism, detention and a Fulbright scholarship to New York before establishing himself as South Africa’s best-known cartoonist. He works as the editorial cartoonist for Daily Maverick. Previously, he was editorial cartoonist for The Sunday Times (1998–2018), Mail & Guardian (1994–2016), The Times (2009–2016), Sowetan (1994–2005), Cape Argus (1996–1997), and Cape Times, The Star, The Mercury and Pretoria News (2005–2008). He has published 22 bestselling annuals as well as The Mandela Files, Vuvuzela Nation (a collection of his sporting cartoons) and Democrazy (a collection of his cartoons spanning the 20 years of democracy). His most recent book is Let the Sunshine In.

Don’t miss the digital book launch of The Murder of Ahmed Timol by Imtiaz A Cajee, with journalist Shannon Ebrahim (30 June)