The story of South Africa’s ‘Public Enemy Number One’ – A Pretoria Boy by Peter Hain
More about the book! 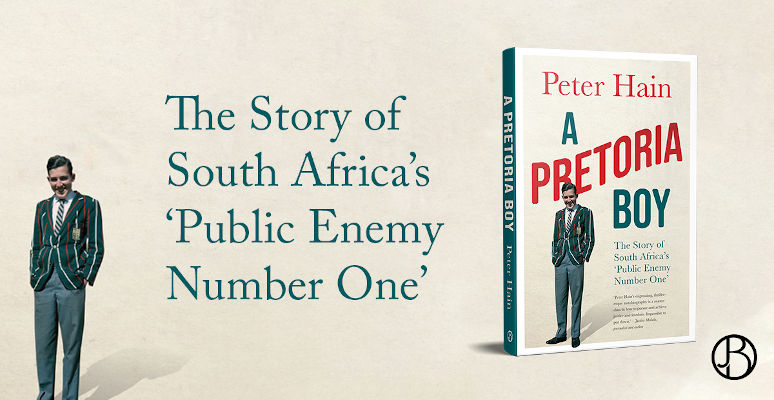 A Pretoria Boy by Peter Hain is out this month from Jonathan Ball Publishers!

A Pretoria Boy begins with the story of how Peter Hain’s journey came full circle when he used parliamentary privilege in 2017–18 to expose looting and money laundering, supplied with the ammunition by his ‘deep throat’ inside the Zuma State. In so doing, he put South Africa’s state capture and corruption on the front pages of the New York Times and Financial Times, which some suggest played a part in Zuma’s toppling.

Going back to an anti-apartheid childhood in Pretoria in the late 1950s and early 1960s, there are vivid descriptions of his parents’ arrest, banning, harassment, helping an escaped political prisoner, the hanging of a close white family friend, and enforced exile to London in 1966 after the government prohibited his architect father from working.

It tells of how, at aged 19, Hain organised and led militant anti-Springbok demonstrations in exile in London in 1969–1970, for which he was denounced by the South African media as ‘Public Enemy Number One’. It is about how he narrowly escaped jail after a South African government-financed prosecution landed him in the Old Bailey in 1972 for conspiracy to disrupt those all-white South African sports tours and, then in 1975, how he was framed for a bank theft committed by an apartheid security agent.

His return to South Africa came first on a secret mission in December 1989, then as a parliamentary observer during the 1994 elections.

The book ends with his perspective on the country’s future.

‘Peter Hain’s engrossing, thriller-esque autobiography is a master class in how to pursue and achieve justice and freedom. Impossible to put down.’ – Justice Malala, journalist and author

‘“Is there anything I can do to help?” A simple question that would once again place Peter Hain back in the centre of efforts to correct wrongs in the land of his birth. This book is a timely reminder that even when many battles have been won, the war against injustice is never over. As ever, Peter Hain remains on the right side of that fight.’ – Bongani Bingwa, 702 and Carte Blanche Presenter

‘More like a thriller than a memoir of international solidarity’ – Mavuso Msimang, ANC struggle stalwart

Lord Peter Hain was brought up in South Africa and has been in politics for over 50 years. Forced into exile with his family, he was a British anti-apartheid leader. An MP for Neath from 1991–2015, he served in the Labour governments of Tony Blair and Gordon Brown for 12 years, seven in the Cabinet. In 2015 he received the OR Tambo National Award in Silver for his ‘excellent contribution to the freedom struggle’. In 2017–18 he exposed money laundering and corruption in the UK Parliament involving global corporates under then President Jacob Zuma, and gave evidence to the Zondo Commission. He is the author of 22 books. He teaches at GIBS and Stellenbosch Business Schools.