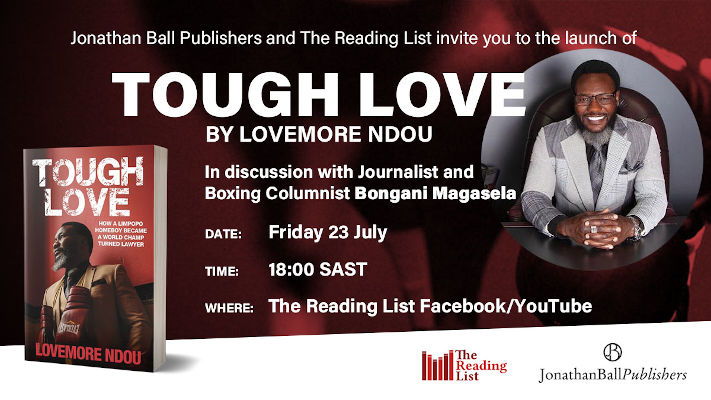 Jonathan Ball Publishers and The Reading List invite you to the virtual book launch of Tough Love: How A Limpopo Homeboy Became A World Champ Turned Lawyer by Lovemore Ndou!

Ndou will be in conversation with journalist and boxing columnist Bongani Magasela.

Growing up in extreme poverty in Messina (today Musina) in the early 1980s, Lovemore Ndou was forced to start fighting to protect himself, his parent and his siblings. At an early age he experienced the injustices of the apartheid system when his arm was broken during a beating in a police cell and he saw his best friend gunned down in a protest march.

After receiving his first boxing training at the gym of a local copper mine, he set off for Johannesburg to further his career. There he was exposed to some of the hard truths of the boxing world, like unscrupulous promoters who made empty promises.

Through sheer determination, he managed to stay afloat and soon the Black Panther (his name in the ring) started winning fights. When he was offered an opportunity to go boxing in Australia, he left the country in the mid-1990s and began to make a name for himself internationally. Once again, he faced many setbacks and challenges but eventually became a triple-world champion.

A number of big names in local and international boxing circles feature in the book. Lovemore describes his awe at meeting Dingaan Thobela and Brian Mitchell, how he trained at Gerrie Coetzee’s boxing centre on the East Rand and how, in later years, he was the main sparring partner for Floyd Mayweather during a stint in the USA.

Never knocked out in 64 professional bouts, Ndou transitioned from combat in the ring to confrontation in the courtroom in a successful post-boxing career as a lawyer. Today he has his own practice in Sydney, Australia.