What I learned from Ben Okri about creative writing 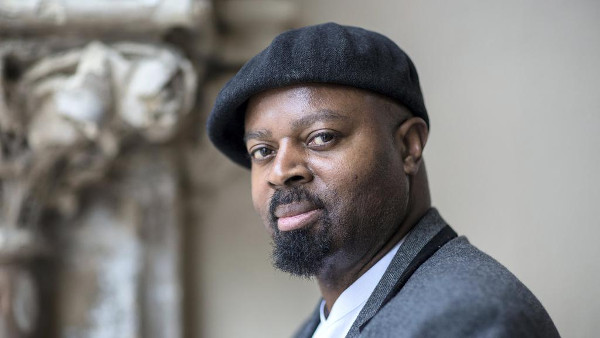 Midway through his sentence Ben Okri stands up and turns to the whiteboard. “Who knows their work well?” he asks. The students in the class look at each other. “Someone give me a line, a line of your work”.

One student gives him a stanza of their poetry. Okri repeats it as he writes and then asks the class to suggest a next line – to carry the weight, measure and beat into a second stanza. Two students give him suggestions but when he reads them slowly they don’t flow, instead they jar. Another suggestion comes and he nods, writes it down. It’s about internal consistency, he says. It’s about building momentum, continuing the tone.

Okri was at the University of Stirling as part of the Booker Prize Foundation’s universities initiative, to talk about his novel The Famished Road for the 25th anniversary of his Booker Prize win. Now a 57-year-old with ten novels and numerous volumes of poetry and essays, the Nigerian writer returned continually to the centrality of tone in his work. 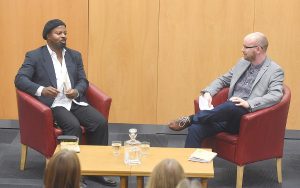 At first this idea seemed too broad, too nebulous to me. But as he spoke it took on a resonance that was somehow wider and deeper than the simple definition of the word. It was the mood of The Famished Road and the multiplicity of voices in the universe of the novel, but also the fluidity of the language and even the physical appearance of the words on the page – how they interconnected and formed patterns and disjunctions – that Okri used to recreate a sense of the oral tradition of his homeland and blend reality and fantasy together.

Get the tone of the opening sentence correct, he suggested to his audience, and it can be the gauge that you follow through the rest of the narrative. To illustrate, he gave the opening line of Anna Karenina and talked of its suggestive potential for the rest of the story:

Happy families are all alike; every unhappy family is unhappy in its own way.

There’s a focus here on what makes families universal but also what makes them distinct. This contrast, he explained, anticipates a narrative unique and specific enough to engage our sympathy but which also allows for philosophical musing.

So often in workshops and tutorials we get snagged on the nuts and bolts of the writing process – on structure and story arc, or precision of imagery, or characterisation and consistent point of view. But then sometimes gloss over how the style of the writing has the potential to immerse a reader, to swallow them whole.

As Okri explained, this is the thing that makes you miss your flight or your shift at work. Call it tone or style or a sense of a world and a voice being created, it’s an intangible element that we all want for the fiction we read. And for those of us who write, for our narratives too.

This is not to say Okri ignores the mechanics of writing. He told the class that the study of the choice and placement of every word of his early writing had been the laboratory that led to The Famished Road. The rewrite is vital in trying to capture an all-consuming tone, he stressed. “Assume that the first thing you write is bad.”

For Okri, the search for the perfect sentence seems to be about striving for the beat and language that will lead to the next perfect sentence and the next. Each line is a struggle but the goal is to craft an overall tone that carries the narrative through and creates an absorbing voice: a narrator like Azaro, for example, the spirit-child who navigates us through the magic realist world of The Famished Road trilogy.

In arguing for an immersive tone, Okri also put up an impassioned defence of the novel when an audience member asked if it was threatened by the advent of more elaborate and narrative-driven television. He only considered for a moment before talking about the ubiquitous nature of story, about the idea of a novel engaging a set of internal eyes; a cinema in the mind that holds viewings unique to every reader.

This connects with us at a level that is intimately tied to our memories, experiences and even values. That sense of communion is often elusive for both writer and reader, but it is what we strive for. Because that tone can never be created in a different form, he said, the novel can never be superseded.

Ben Okri’s new book is The Magic Lamp: Dreams of Our Age, a collection of meditations and stories illustrated by Rosemary Clunie, out soon from Jonathan Ball Publishers.