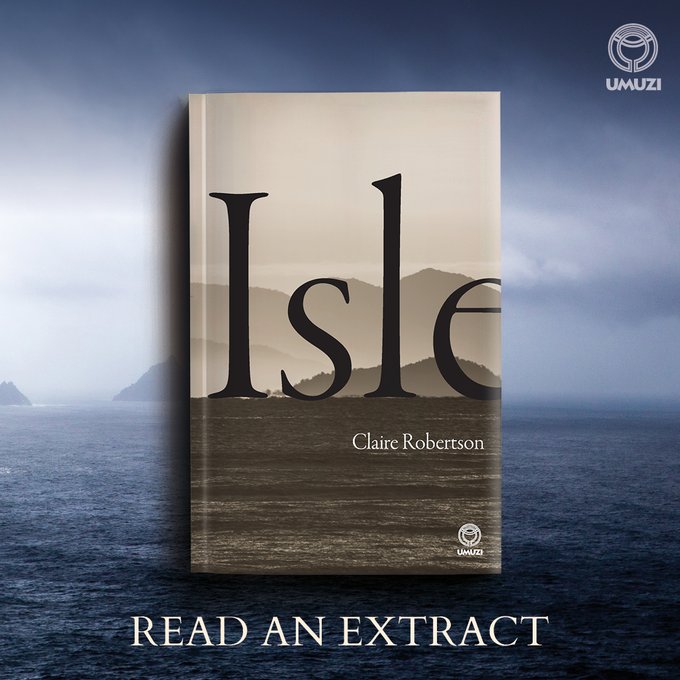 ‘She puts herself under a spell of serenity, to be tranquil and swift. Nothing she does can break it. She cuts her finger and curses out loud and she is still between its buffers. The ceaseless hum.’

Binding the lives – so different and so similar – of women separated by time and place, Isle is an all-encompassing rumination on privacy, inhibition and female desire, rendered in her masterful prose.

His forehead is slick and his face is stiff from being held in its grimace. And she is watching from the door. He ignores her to plot his position. It is almost a courtyard, bound on three sides and a half by the timber and walls of houses. It is closed enough for there to be no horizon but thatch, open enough to house a plum tree, a scrap of sward, low plants. There are a few cobbles before the door and a bench near the cobbles and there is he.

Today there is real warmth in the sun. He almost could meet it with tears. And here she comes with her wax tablet and her pages and chalks and charcoal sticks. He cannot be still for a moment but she alights on him, like a fly. A staring fly. He thinks he sees that her own eagerness embarrasses her – that she is somehow also being bid. She in turn certainly bids him. Or begs: Oh, if you could, if you could just keep that look. No, eyes open – perhaps if you look up. I know, look at a plum blossom – seek out a single blossom, that will give your face the seeking cast. One holy bud. She seems to be laughing at him or herself and his face loses its excellent pain as he looks at her, but she’ll have him in agony again.

Now that he has discerned her work with him, her scratchings only irritate or soothe him, dependent on how lately he has been brought his draught. He does not remember fearing them.
Thus the afternoon of a day he rises from his bed: the sun sinks, the plum’s shadow deepens, a little cat pads towards the bench and seems in courtesy to change course on seeing him there. The woman leaves him and he can see her in the house, seated, bent at work.

The wall at his back is new – the chill of new mortar, the spice of shaved wood from the lintel. He senses buildings beyond this one, but there are no town sounds. How far could he go, if he should brave rising from this bench and staggering beyond this safe yard?

The woman returns. She sets a brown jug at his side on the bench, and manchet and cured pig meat. Two out of three are forbidden, though permitted out here. His gorge rises to forbid him the pig nonetheless. He takes some ale and some bread, though. Good bread.

She sits. On her lap are the board, the parchment, black crayons and red stubs, but she does not take them up. Nor, now that she is not making some sort of copy of him, does she turn her head to look at him. In her shoulders, in her still hands, there is some tact. She clears her throat. He swallows and sets the bread on the bench.

She lifts a hand in the direction of the corners of the yard and says: We are none but women here.

She turns her head to find him and judge his understanding. Eye to eye.

She says: Uncumbered of husbands. Fathers, too.

It is monastery? He hears the strange word from his mouth and wonders what language he employed before, that this should sound so new. They have discovered poor Latin in common, creaking and sparse.

She lifts a pleat of homespun: You might suppose so, but no, not holy sisters, and this is no monastery.

She explains: they have taken no solemn lifelong vows but yet in these walls – her hand’s lift says there is a community beyond – there are only women. To win permission to live as no one’s wife or daughter, they have forsworn that which need not concern you, in an oath before the bishop, but otherwise he has no rule over them – this is an important point to her – and here they live, in their own homes, some in pairs, or alone with their Ideal.

They number among them weavers and dyers and a bee-tender and a beeskepmaker and a brewer, and teachers and makers of several other sorts. Some ladies of means, and working women. She herself, he congratulates himself for having guessed so, is a maker of diverse things – sacred things, usually. And a copyist. And an illuminer.

She says her name, Mechthild, and he says it back, his unwary throat clicking and swallowing half the word.

Now she is more in earnest. She opens a hand in his direction: We do not have men here. And never overnight. Only a priest sometimes. So although I cannot keep you in my yard, be careful when you go abroad. Tattle will follow you. She stands, the sheets in her hands. For a moment she apparently forgets him before her as she lifts the piece of parchment where she has drawn lines to approximate him. She says: I have a thought about likenesses. About the idea of the thing and the thing itself.

But her words, of which he has so few, and she so few in common with his, dwindle. She laughs, a small throat laugh.

She says: You could say my business amounts to a baby at one end of the story and a naked man at the other. Now name me a place where you would be less likely to encounter either of those.
Again the laugh.

I have thanked the river for bringing you, she says.