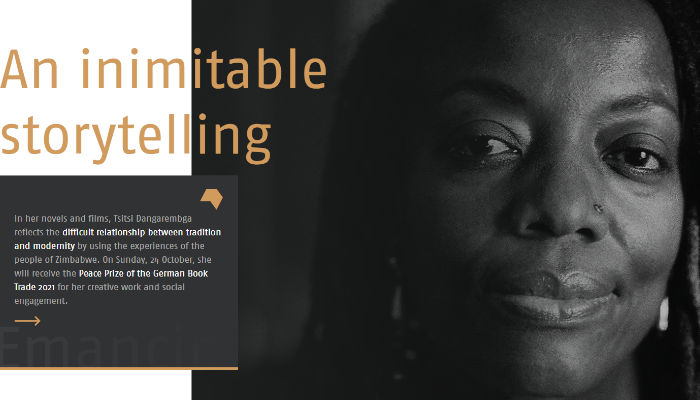 Jacana Media is thrilled to announce that Tsitsi Dangarembga has been awarded the 2021 Peace Prize of the German Book Trade.

Karin Schmidt-Friderichs, president of the German Publishers and Booksellers Association and chairperson of the Board of Trustees, announced Dangarembga as the winner of the annual prize on 21 June 2021.

The prize is valued at €25,000 (R422,600), and awarded to someone ‘who has made an important contribution to peace, humanity and understanding between people’.

The jury commended Dangarembga for combining ‘inimitable storytelling with a universally compelling perspective’, and said her trilogy of novels – Nervous Conditions (1988), The Book of Not (2006) and This Mournable Body (2018) – ‘reveals social and moral conflicts that go far beyond regional references, thereby creating the stage for the discussion of globally relevant questions of justice’.

The German Publishers and Booksellers Association has chosen to award the 2021 Peace Prize of the German Book Trade to Tsitsi Dangarembga. Zimbabwean novelist and filmmaker Tsitsi Dangarembga combines inimitable storytelling with a universally compelling perspective in a body of work that has made her not only one of the most important artists in her native land but also a popular and widely-recognised voice of Africa in contemporary literature.

In her acclaimed trilogy of novels, Tsitsi Dangarembga draws on the story of a young woman’s life from adolescence to middle age to depict the struggle for the right to live in dignity and the fight for female self-determination in Zimbabwe. In doing so, she reveals social and moral conflicts that go far beyond regional references, thereby creating the stage for the discussion of globally relevant questions of justice. In her films, she addresses issues that emerge from the clash of tradition and modernity. The messages she sends out via her work have successfully reached broad audiences both in Zimbabwe and neighbouring countries.

Tsitsi Dangarembga has long since complemented her artistic work with a rigorous commitment to fostering creative industries in her home country and, in particular, opening up culture to female creators. At the same time, she has also fought tirelessly for civil liberties and political change in Zimbabwe. Her most recent peaceful protest is aimed at corruption, and she has already faced prosecution by the government for her efforts. “If you want your suffering to end, you have to act. Action comes from hope. This is the principle of faith and action.”