Trust me, love me, just don’t … Believe Me – the new twisty psychological thriller from JP Delaney
More about the book! 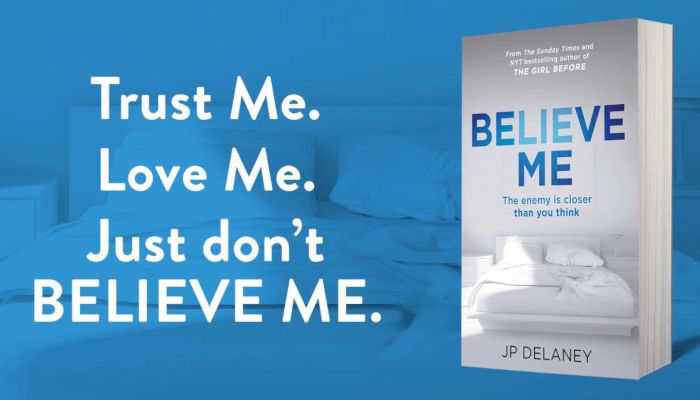 In this twisty psychological thriller from the New York Times and Sunday Times bestselling author of The Girl Before, an actress plays both sides of a murder investigation …

Believe Me is the second psychological thriller from JP Delaney, a pseudonym for a writer who has previously written bestselling fiction under other names. JP Delaney’s first thriller The Girl Before became a global bestseller published in 41 countries. A film version is being brought to the screen by Academy Award winners Ron Howard and Brian Grazer’s Imagine Entertainment.

I’m just an actress. I wanted to stand on a stage and have people applaud. How on earth did I get into all this?

A struggling British actress, in New York without a green card, Claire needs work. She takes the only part she’s offered: as a decoy for a firm of divorce lawyers, hired to entrap straying husbands, catching them on tape with their seductive propositions.

Never hit on them directly. Make it clear you’re available, but they have to proposition you, not the other way around. The firm is after evidence, not entrapment. The innocent should have nothing to hide.

Then the game changes.

When the police start investigating one of Claire’s targets for murdering his wife – and potentially others too – they ask her to help lure their suspect into a confession. Claire can do this. She assumes a voice and an attitude, something from an old film noir. A masterclass in deception. But who’s deceiving who? And that’s when Claire realises she’s playing the deadliest role of her life …