‘There was so much she never heard. That she probably hadn’t wanted to hear’ – Read an extract from Borderline, the new novel by Marita van der Vyver
More about the book! 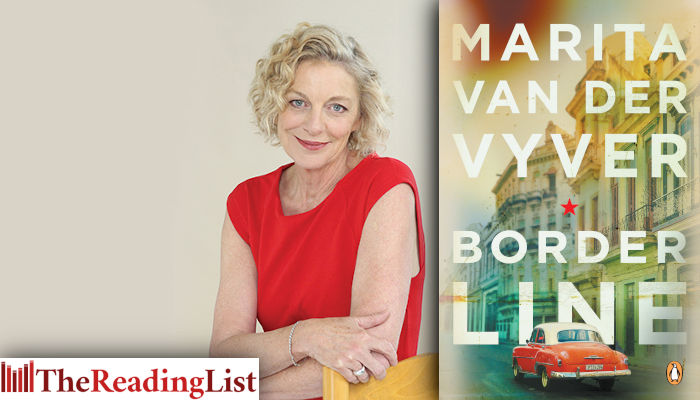 ‘Some things don’t become easier when you grow older, she thinks while letting her cheek rest against his broad chest for barely a second. Some things only become more difficult. Because you are more afraid and you are more fragile, and everything breaks more easily, your bones and your heart, and when something breaks there isn’t an awful lot of time left for it to heal.’

A letter among her deceased ex-husband’s belongings rips open Theresa’s world. For years she has turned her back on Theo, a man who spent the last two decades of his life institutionalised, and on their shared past in a country where teenage boys were conscripted to fight on ‘the Border’ in a war that those back home knew little about. Least of all Theresa, who spent her days dreaming of discos and first kisses.

Realising that the letter was written by a Cuban soldier and addressed to his child – who, if still alive, would be at least forty years old – Theresa heads for Cuba: to search for the soldier’s child, to deliver the letter, to atone in some way for Theo’s deeds and for her own ignorance.

In sultry Cuba, amid its picturesque 1950s cars and the fragrant smoke of its cigars, Theresa’s search connects her intimately with those branded ‘the enemy’ during the war in Angola as she begins to unravel what growing up in the South Africa of that time really meant.

A group of conscripts in tattered, faded green clothing in a lush green landscape somewhere. Some are shirtless and some have hacked their long pants into shorts; the sleeves have been ripped off some of the shirts to reveal sinewy arms. Most of the bare chests and arms don’t belong to men; they are the hairless chests and skinny arms of boys who aren’t getting enough to eat. Some of the faces look too young for the moustaches on the upper lips. From a glance at the long fringes and too-short shorts, you can tell that the photograph dates from the seventies. The unkempt beards of the time look so different from the fastidiously manicured beards young men are wearing now. The hipster in the house next door to hers, pop stars and rugby players, the tattooed and bearded role models of contemporary youth.

If she had children, they probably would have looked like that too. If.

Theresa wipes her eyes, reaches for her spectacles on the coffee table beside her, peers through them at the picture to try and recognise Theo. This was several years before she got to know him as a postgraduate student in Stellenbosch. Which one of these smirking teenage boys would turn into the tortured man she came to love? Could it be the skinniest one in the middle, the shock of black hair, the wry smile – then already? Yes, she recognises the calves below the frayed cut-off pants. She remembers how beautiful she always thought his legs were, the long, lean thighs, the sharp knees and muscular calves and slim ankles and narrow Greek feet.

Only, by then he was in fact already far across the border.

In Angola they weren’t allowed to wear the brown army uniforms, she only learned much later. Instead, they wore green ‘prison garb’ that rotted on their bodies. Bata tekkies instead of army boots. Removed the chains with dog tags from their necks, erased the branding from tubes of toothpaste and soap, carried no personal belongings that betrayed the fact that they were South African. In case they were killed or wounded or captured. Because it was of course supposed to be a secret incursion. Some of these details she heard bit by bit over the years, always unexpectedly and usually unasked for, on evenings when he had had too much to drink or later at night when he woke up from a nightmare, struggling for air.

But there was so much she never heard.

That she probably hadn’t wanted to hear.

At the end of 1975 she’d been fifteen years old, in standard seven in a Boland town about an hour outside of Cape Town. ‘Carefree’ wasn’t the word she would have used to describe her life back then, because her teenage years were beset with misery and discontent. She wasn’t as thin as she wanted to be, not nearly as popular among her classmates as she longed to be, and her parents couldn’t understand why she spent hours lying in her stuffy bedroom listening to Pink Floyd’s The Dark Side of the Moon. Over and over. She had no idea what she wanted to become; she barely knew what she was, except confused, isolated, bored.