‘Something terrible has happened … She ended up under a train.’ – Read an excerpt from Irna van Zyl’s heart-stopping new thriller, Blood Stone
More about the book! 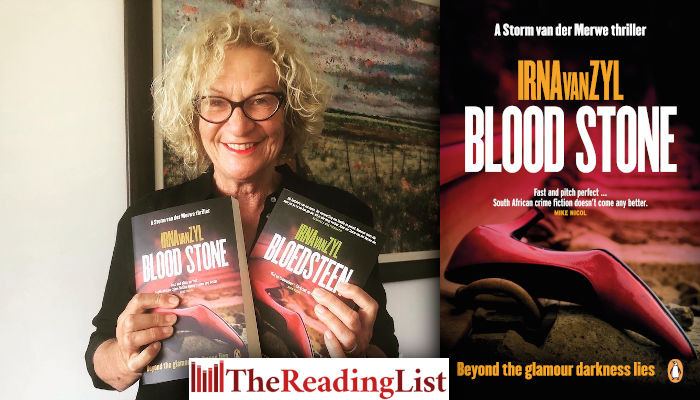 Blood Stone is also available in Afrikaans as Bloedsteen, and as an audiobook, narrated by beloved Afrikaans actor Chris van Niekerk.

Van Zyl is an award-winning journalist, magazine editor and media entrepreneur who now writes full time. She made her literary debut in 1995 with a collection of short stories. Her first novel, Dead in the Water/Moordvis was published in 2016. Her second novel, Death Cup/Gifbeker, was published in 2018. She lives in Cape Town with her partner, two dogs and a cat.

Detective Warrant Officer Storm van der Merwe’s mother did not fall under the train on Paddington Station by accident. No, she’d been pushed.

By a skinny weed of a guy with a dark-grey cap shading his eyes, a khaki summer jacket, black jeans, pointy brown leather shoes and a light-brown complexion. A man so nimble he disappeared into the throng of afternoon commuters, leaving the handful of bystanders with nothing more than a flash of green, a glance of the cap or a scribbling of ink at his throat.

Just one man was able to give a description of the backpack: average, smallish. A black bag slung over the shoulder – typical London commuter look. A laptop bag with possibly a white stripe down the side, flattish, as if empty of books, clothes, documents or even a slim laptop.

‘Well, maybe a pen or two,’ someone quipped in the cynical English manner.

Storm’s mother, Rowena, fell silently into the gap between the last carriage and platform 10. No scream, no sound. The platform that usually received the Overground from Twyford. Right beside the bronze statue of Paddington Bear seated on his suitcase, big hat and all. With a shiny nose from the daily caresses of passing children.

Rowena landed directly alongside the tracks, parallel to the stationary train. Her arms, astonishingly, lay stiffly at her sides. Her legs, thank God, out straight. In her chicest summer outfit. Groomed for a select audience of English fashion aficionados. A patterned red dress, light summer fabric, kitten heels, legs bronzed, stylish trench coat over her arm. Matching beige handbag and briefcase of soft leather on a shoulder strap.

As she fell, she imagined a young man behind her, his hand almost grasping at her waist as if trying to right himself in the crush crowding the open door. Her fingers on the long shiny handle, ready to pull herself up into the train. The horn giving the final signal.

And then his grip had tightened. Followed by a sharp shove with his shoulder. Quick as anything. Like a seasoned commuter, used to wresting his way through the heaving hordes of London’s most overcrowded rush- hour train. The casual force of having no choice but to rudely elbow another aside.

In vain she tried grabbing the handle again as she lost her balance. She fell. Her knee struck the platform, her hands clutched at the concrete sidewall.

There was no stopping it. She plunged into the gap beside the train.

The light summer dress offered no protection on the metre-high drop, with the gravel painfully hard beneath her naked arms. Her handbag flung open between the tracks. The contents – lipstick, keys, tissues, mirror and wallet – smashed against the ground along with one red kitten heel.

Her briefcase and trench coat left behind on the platform.

Frozen in shock, she lay motionless. And then, in a daze, panicked about getting away from the tracks, she tried to raise herself onto her elbows. And that’s when it hit her, full on the head, the drawbar of the departing train.

Storm van der Merwe stared at the knob of her broken toaster in the kitchen of her Hemel-en-Aarde Valley house in Hermanus. She had just stuck two slices of white bread into the appliance when her cellphone started ringing. Shrill and piercing, because she had turned the volume to max some time before, and, to her frustration, had found herself unable to reverse the setting.

Her shoulder-length corkscrew curls curtained her face as she leaned over, squinting at the knob in her hand.

Another bloody broken thing in the house.

She’d arrived on the smallholding half an hour before and was still dressed in what she considered her detective’s uniform these days: a tidy pair of black trousers in crease-free fabric, too bloody formal, but at least a slim fit. Paired with that, her favourite: a bright white linen shirt. And to keep the cold at bay a black blazer, the sleeves rolled up. Comfy black leather lace-ups.

Now that they had a new commanding officer, everyone in the office was suddenly dressing all neatly. As if it would help them get promoted.

And, after much consideration, Storm joined their ranks. So she set aside her colourful wardrobe: the purple pants, yellow and acid-green shirts and red sneakers. For the time being that would be weekend gear.

It was time to make an impression and give her career some direction, because the new boss was Colonel Amber Cloete, the school friend with whom she’d been having an uncomfortable and nearly non-existent relationship since leaving Cape Town. And now Amber had been promoted to full colonel, while Storm was still Detective Warrant Officer Van der Merwe.

Storm ignored the phone, the toaster knob still between her fingers. She leaned over to see if she could make the thing stay, but struggled to figure out how.

Storm swept the hair from her face in irritation and gazed at the ceiling. Only one of the three downlights was working. She lifted the toaster and shook it back and forth, as if that would repair the knob.

What’s more, that morning she had also noticed the toilet leak getting worse – where there had been a few drops the week before, there was now a puddle.

The tap had a problem too, dripping ceaselessly, and the night before she’d noticed mould in the corner of the shower.

Of course everything damn well cost money and more money. Or effort. Not that she had a choice. She’d have to do something to her abode. And just as swiftly to her frame of mind too. Once things got out of hand, it would be just that bit more difficult to sort them out.

Without glancing at the number, she picked up when she’d run out of reasons not to answer. Surely some nobody looking for a detective to help them with enquiries about a break-in or car wreck, or news about the road closure and riots.

‘Yes. Van der Merwe.’ For the first time she looked properly at the phone. Rowena.

It was seven o’clock Monday night, six o’clock in London. She felt lousy for not having answered straight away.

But the person on the other end was not her mother. ‘Storm.’ A man’s voice. It was her mother’s new boyfriend, Jos. On Rowena’s cell. Just the thought of him was enough to upset her.

‘Storm,’ Jos repeated softly. At the exact moment she smelt burning toast and noticed the trailing smoke, followed by the two slices popping up with a clang. Dammit! Pitch black.

She’d met the guy just once, over a brief coffee with Rowena in Cape Town before the two of them started giggling like a pair of irritating young lovers and excused themselves to supposedly continue their Waterfront shopping.

To Storm’s eyes they were more likely on the lookout for a room in the nearest hotel. And then and there she made up her mind that she didn’t like him one bit, and went off to seek the comfort of a plate of slap chips and a slice of cheesecake. The man was virtually her own age and had swept her mother off her damned feet. In his mid-thirties, for goodness sake. A total hipster with that beard and those damn tight-arse hipster pants with the elasticated hems. That Jos.

Her mother, twenty years older and head over heels. And Storm wanting to warn her, but unable to put her finger on why exactly.

Rowena, top publicist from Johannesburg. Head of her own company. Filthy-rich clients, from politicians to celebrities to big business. Good grief, the embarrassment. She was going to make an arse of herself.

‘Something terrible has … happened to Rowena,’ said Jos. She could hear him struggling to speak, his voice ragged.

Her scalp froze and her breath disappeared down her throat. Something was wrong. Something serious.

Storm couldn’t get a word out. She opened her mouth but there was nothing. Not even a whisper.

‘The train hit her head … She’s … gone. Unconscious,’ he said again. ‘A vegetable, I overheard some of the nurses saying.’ He started wailing. There was blubbing and sniffing.

Storm felt as if she’d been hit by a train herself. Not a single thought ran through her head. Her brain had quit. A cotton-wool ball in her skull.

She sank onto the cold tiles, her back against the fridge, legs pulled up against her chest. Her mouth was still open, but no sound, no word escaped. There was only an immense sense of pressure on her chest.

She clasped the phone so tightly to her ear that she cut off the call by mistake. With shaking hands she redialled Rowena’s number. Jos answered immediately and continued before she could get a word in edgeways.

‘She’s going to die, Storm.’ His voice was hushed. ‘Or she won’t wake up again. You have to come over. Immediately. She’s in St Mary’s A&E. Ask for … trauma unit. Or something. Please, please. Help me.’