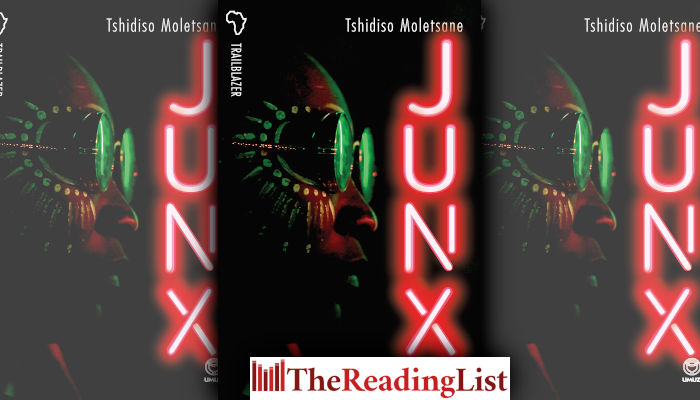 Penguin Random House has shared an excerpt from Junx, the debut novel from Tshidiso Moletsane.

In Dobsonville, a few hours before the party of the year, a guy shares a joint with his friend Ari. Ari is always right. Ari is also imaginary. And winged.

In a few hours, while Ari plays both angel and demon on his shoulder, our man will end up joyriding to a brothel in a snatched tourist rental car.

But the police – and the burly tourists – are in pursuit. At some point, when you’re a hunted man and there’s a gun tucked in the waistband of your pants, things come to a head. Will he be okay? Ask Ari. Ari never lies.

Prepare for a party night that courses from Soweto to the Joburg CBD as Tshidiso Moletsane’s explosive novel serves shots of sex, drugs and anxiety while tearing into life, death, race and politics, with consequences only Ari could have seen coming.

I grab a jersey before I leave the house. It’s getting a bit cold. The sun is setting and the streets are going dark. I’m not too sure what the time is. Emaciated strays are foraging through people’s trash. The streets are thick with the smell of piss and dead rodents. Little kids are playing football over broken bottles and discarded condoms and used syringes and burnt-out blunts. This is what Thandiswa Mazwai was talking about when she said the ghetto is our first love. Ari is flying right beside me. He tells me one of the strays is really ill and will die in a month or so. He tells me one of the kids has a heart condition. Ari is never wrong.

Ari then tells me Thabo is hanging by himself outside his place. And sure enough, as I turn the corner, I see Thabo leaning against the wall with a beer in his hand. Thabo is one of my boys. I’ve known him since forever. I walk over and sit beside him. Thabo is anti-religion. First thing he says when I settle beside him is, ‘You know there’s a pastor in Uganda who’s making the people in his church eat grass? He says it’ll humble them.’ He drinks from his bottle of beer. ‘There’s a pastor in Zambia who’s making people in his church drink petrol. I don’t know what the story is with that one.’

This is Thabo explaining what he thinks is wrong with religion. He reckons people who are deeply religious are often flawed somehow, psychologically, and are, as a result, easy to manipulate. These are the people who are often drawn into cults. All the little people looking for answers.

I swear you can’t make stuff like this up.

Then I say, ‘That’s kinda like how Catholic priests tell little boys to suck them off or else they’ll go to hell or something stupid like that.’

He chuckles. ‘I wish I could get away with that.’

I assume he isn’t talking about having sex with little boys. I tell Thabo about this prominent high-ranking Catholic priest named George Pell. He is accused of repeatedly sexually abusing young boys. The guy once said that abortion is a much greater moral issue than priests sexually assaulting children. I add that apparently the Catholic Church has paid out hundreds of millions of dollars in settlements relating to sexual abuse. More than a fifth of the victims were under ten years old. Wild, isn’t it?

Thabo chooses not to reply to my obscure factoid.

I tell Thabo that when they say evil is profoundly spiritual they’re probably talking about nonsense like this.

He sort of nods in reply, then grunts and mumbles about needing to take a piss. He whips his dick out and pisses facing the wall. You’re never really friends with someone until you’ve seen their penis, this being a sacred ritual among guys and an important milestone in any friendship. He finishes and shakes it four times.

Who does that? Who shakes their dick four times after taking a piss?

Then Thabo says, ‘Let’s go inside.’

Thabo carries that smell that old people who are dying have, those people who look like they should be in a hospital instead of the townships. He lives in this shack I helped him build some years ago. He opens the door and we walk in. Ari jumps onto my shoulder and wraps his tail around my neck. He licks the side of my face and fixes up my hair. Ari touches my hair a lot.

Thabo’s shack is pretty nice. He has this large flat-screen TV that he got from when they broke into some house out in Roodepoort. He has a laptop he stole from the electronics store he used to work at. He has a large collection of shoes and clothes that he literally took off people’s backs. One time, he even stole a diamond ring worth R50 000 by shoving it up his butt. He shoves things in his butthole pretty often now, more than you’d think actually, and he is not at all embarrassed about it. He says that in Russia the anus is colloquially re­ferred to as the thief’s pocket. I don’t know how true that is.

‘God helps those who help themselves,’ he always says. Oh, the irony.

Before we settle in, Ari points to this large painting that’s hanging above Thabo’s bed.

I have to strain my eyes to see it better. ‘Is that Biko? Where did you get that?’ I ask.

Bizarrely, I notice this really impressive grandfather clock standing incongruously alongside the painting.

‘How did you even?’ I gesture towards the thing.

‘Like it? I call it Big Bob. Really is something, right?’

Thabo appears extremely proud. Good for him, I guess.