Read ‘When my mother came to stay’ – Read an excerpt from Yaa Gyasi’s new novel, Transcendent Kingdom (Plus: Interview)
More about the book! 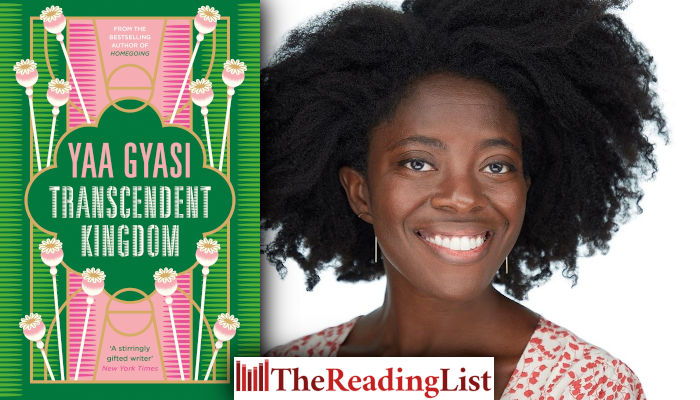 From Yaa Gyasi, the bestselling author of Homegoing, comes Transcendent Kingdom, an epic novel from the heart of contemporary America.

As a child, Gifty would ask her parents to tell the story of their journey from Ghana to Alabama, seeking escape in myths of heroism and romance. When her father and brother succumb to the hard reality of immigrant life in the American South, their family of four becomes two – and the life Gifty dreamed of slips away.

Years later, desperate to understand the opioid addiction that destroyed her brother’s life, she turns to science for answers. But when her mother comes to stay, Gifty soon learns that the roots of their tangled traumas reach farther than she ever thought.

The Atlantic has shared an excerpt from Transcendent Kingdom, entitled ‘When my mother came to stay’, where the narrator Gifty offers an intimate glimpse at the relationship between a mother and daughter.

Whenever I think of my mother, I picture a queen-size bed with her lying in it, a practiced stillness filling the room. For months on end, she colonized that bed like a virus, the first time when I was a child and then again when I was a graduate student.

The first time, I was sent to Ghana to wait her out. While there, I was walking through Kejetia Market with my aunt when she grabbed my arm and pointed. “Look, a crazy person,” my aunt said in Twi. “Do you see? A crazy person.”

I was mortified. My aunt was speaking loudly, and the man, tall with dust caked into his dreadlocks, was within earshot. “I see, I see,” I answered in a low hiss. The man continued past us, mumbling to himself as he waved his hands about in gestures that only he could understand. My aunt nodded, satisfied, and we kept walking through the hordes of people gathered in the market until we reached the stall where we would spend the rest of the morning attempting to sell knockoff handbags. In my three months there, we sold only four bags.

Even now, I don’t completely understand why my aunt singled the man out to me. Maybe she thought there were no crazy people in America, that I had never seen one before. Or maybe she was thinking about my mother, about the real reason I was stuck in Ghana that summer, sweating in a stall with an aunt I hardly knew while my mother healed at home in Alabama. I was 11, and I could see that my mother wasn’t sick, not in the ways that I was used to. I didn’t understand what my mother needed healing from. I didn’t understand, but I did. And my embarrassment at my aunt’s loud gesture had as much to do with my understanding as it did with the man who had passed us by. My aunt was saying, That. That is what crazy looks like. But instead what I heard was my mother’s name. What I saw was my mother’s face, still as lake water, Pastor John’s hand resting gently on her forehead, his prayer a light hum that made the room buzz. I’m not sure I know what crazy looks like, but even today when I hear the word, I picture a split screen, the dreadlocked man in Kejetia on one side, my mother lying in bed on the other. I think about how no one at all reacted to that man in the market, not in fear or disgust, nothing, save my aunt, who wanted me to look. He was, it seemed to me, at perfect peace, even as he gesticulated wildly, even as he mumbled.

But my mother, in her bed, infinitely still, was wild inside.

In an exclusive interview with Oliver Munday, the author explains why Gifty, the narrator, chose the word ‘colonizing’ to describe her mother, and why she refers to her mother as ‘Black Mamba’.

Munday: The story opens with Gifty, the narrator, sharing a memory of her mother lying in bed. In it, she uses the striking verb colonizing to describe her mother’s position. It’s an apt metaphor for the way a parent can loom large in the minds of children. Do you imagine the instinct to escape parental shadows is a necessary step in coming of age?

Gyasi: I think it depends on the nature of the child’s relationship with her parents. I imagine that many people welcome having a role to step into, and parents can often offer that ideal. In Gifty’s case, tragedy transformed her mother in ways that left very little capacity for the care that Gifty, or really any child, deserves. I think the quality of Gifty’s mother “looming large” results from a role shift, wherein Gifty, as a young child, finds herself having to care for her mother in much the same way we expect mothers to care for their children—making sure she’s eating, clothed, and taking her medication. Many of us find ourselves in this position as our parents age and start to require a different kind of care from us than they did when we were children. For Gifty, it’s the caretaking that is all-consuming. I don’t know that she ever escapes her mother’s shadow, nor do I necessarily think she wants to.

Munday: Gifty kept a journal as a child in which she used code names for the members of her family. Her mother’s sobriquet is Black Mamba: a snake that often counts mice among its prey. Does Gifty, as an adult, wish to keep her lab mice—her professional life—separate from her family life?

Gyasi: I think of Gifty as a character who “doth protest too much” when it comes to explaining how her personal life influences her professional life. She tells us repeatedly that her family history has nothing to do with her chosen career path, but this is clearly another form of code. Her journal’s code names fail to obscure anything, yet the need to conceal speaks volumes about Gifty’s discomfort. There’s a moment later in the novel when Gifty brings her mother to the lab with her, and she’s relieved not to encounter anyone. It’s telling that despite working within a behavioral-neuroscience program, where presumably no one would judge her mother’s depression, Gifty still feels it necessary to maintain the separation. It’s the shield she needs to do her work objectively.