Read the opening chapter of Transcription, the new novel from bestselling, award-winning author Kate Atkinson
More about the book! 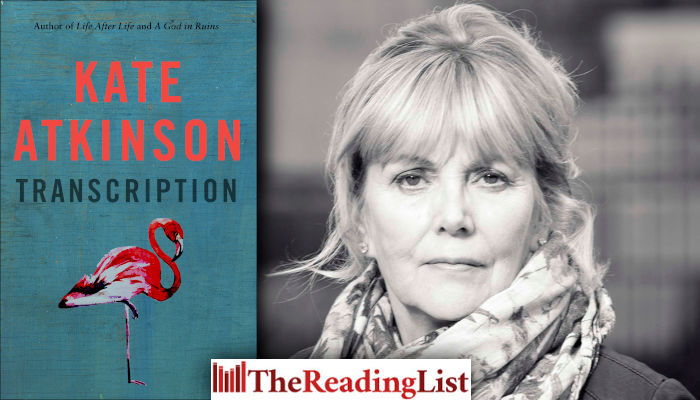 Penguin Random House has shared an extract from Transcription, the magnificent new novel by bestselling, award-winning Kate Atkinson, author of a Life After Life and A God In Ruins.

‘Think of it as an adventure, Perry had said right at the beginning of all this. And it had seemed like one. A bit of a lark, she had thought. A Girl’s Own adventure.’

In 1940, 18-year old Juliet Armstrong is reluctantly recruited into the world of espionage. Sent to an obscure department of MI5 tasked with monitoring the comings and goings of British Fascist sympathisers, she discovers the work to be by turns both tedious and terrifying. But after the war has ended, she presumes the events of those years have been relegated to the past for ever.

10 years later, now a producer at the BBC, Juliet is unexpectedly confronted by figures from her past. A different war is being fought now, on a different battleground, but Juliet finds herself once more under threat. A bill of reckoning is due, and she finally begins to realise that there is no action without consequence.

Transcription is a work of rare depth and texture, a bravura modern novel of extraordinary power, wit and empathy. It is a triumphant work of fiction from one of this country’s most exceptional writers.

Kate Atkinson won the Costa (formerly the Whitbread) Book of the Year prize with her first novel, Behind the Scenes at the Museum. Her bestselling novels include four featuring former detective Jackson Brodie, which became the BBC television series Case Histories, starring Jason Isaacs. Her 2013 novel Life After Life spent a record number of weeks on top of the bestsellers lists on both sides of the Atlantic, and won the South Bank Sky Arts Literature Prize and the Costa Novel Award, a prize Kate Atkinson won again in 2015 for A God in Ruins.

Read an excerpt from Transcription:

She could although she didn’t seem able to respond. She was badly damaged. Broken. She had been hit by a car. It might have been her own fault, she had been distracted – she had lived for so long abroad that she had probably looked the wrong way when she was crossing Wigmore Street in the midsummer twilight. Between the darkness and the daylight.

A policeman? Or a paramedic. Someone official, someone who must have looked in her bag and found something with her name on it. She had been at a concert – Shostakovich. The string quartets, all fifteen parsed out in servings of three a day at the Wigmore Hall. It was Wednesday – the Seventh, Eighth and Ninth. She supposed she would miss the rest of them now.

In the June of 1942 she had been in the Royal Albert Hall for the concert premiere of the Seventh Symphony, the ‘Leningrad’. A man she knew had finessed a ticket for her. The Hall had been packed to the rafters and the atmosphere had been electrifying, magnificent – it had felt as though they were at one with the occupants of the siege. And with Shostakovich too. A collective swelling of the heart. So long ago. So meaningless now.

The Russians had been their enemies and then they were their allies, and then they were enemies again. The Germans the same – the great enemy, the worst of all of them, and now they were our friends, one of the mainstays of Europe. It was all such a waste of breath. War and peace. Peace and war. It would go on forever without end.

‘Miss Armstrong, I’m just going to put this neck collar on you.’

She found herself thinking about her son. Matteo. He was twenty-six years old, the result of a brief liaison with an Italian musician – she had lived in Italy for many years. Juliet’s love for Matteo had been one of the overwhelming wonders of her life. She was worried for him – he was living in Milan with a girl who made him unhappy and she was fretting over this when the car hit her.

Lying on the pavement of Wigmore Street with concerned bystanders all around she knew there was no way out from this. She was just sixty years old, although it had probably been a long enough life. Yet suddenly it all seemed like an illusion, a dream that had happened to someone else. What an odd thing existence was.

There was to be a royal wedding. Even now, as she lay on this London pavement with these kind strangers around her, a sacrificial virgin was being prepared somewhere up the road, to satisfy the need for pomp and circumstance. Union Jacks draped everywhere. There was no mistaking that she was home. At last.

‘This England,’ she murmured.

Juliet came up from the Underground and made her way along Great Portland Street. Checking her watch she saw that she was surprisingly late for work. She had overslept, a result of a late evening in the Belle Meunière in Charlotte Street with a man who had proved less and less interesting as the night had worn on. Inertia – or ennui perhaps – had kept her at the table, although the house specialities of ‘Viane de boeuf Diane’ and Crepe Suzette had helped.

Her rather lacklustre dinner companion was an architect who said he was ‘rebuilding post-war London.’ All on your own? she had asked, rather unkindly. She allowed him a – brief – kiss as he handed her into a taxi at the end of the night. From politeness rather than desire. He had paid for the dinner after all and she had been unnecessarily mean to him although he hadn’t seemed to notice. The whole evening had left her feeling rather sour. I am a disappointment to myself, she thought as Broadcasting House hove into view.

Juliet was a producer in Schools and as she approached Portland Place she found her spirits drooping at the prospect of the rather tedious day ahead – a departmental meeting with Prendergast, followed by a recording of Past Lives, a series she was looking after for Joan Timpson who was having an operation (‘Just a small one, dear.’).

Schools had recently had to move from the basement of Film House in Wardour Street and Juliet missed the dilapidated raffishness of Soho. The BBC didn’t have room for them in Broadcasting House so they had been parked across the road in No 1 and gazed, not without envy, at their mother-ship, the great, many-decked ocean liner of Broadcasting House, scrubbed clean now of its wartime camouflage and thrusting its prow into a new decade and an unknown future.