Read an excerpt from The Kingfisher Secret – a new anonymously authored book about a presidential love affair
More about the book! 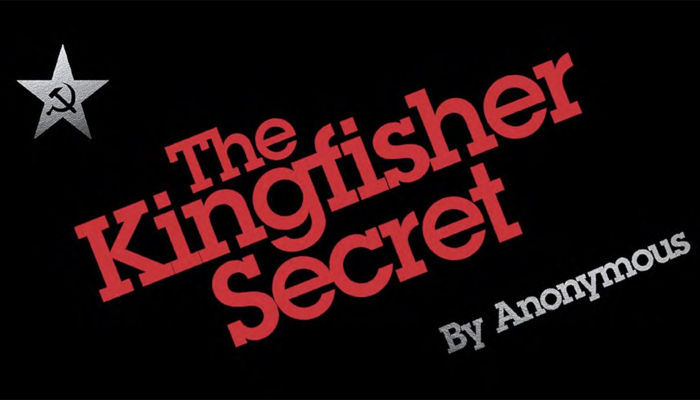 The Kingfisher Secret is anonymously authored by a respected journalist, and is said to be ‘rooted in real life, but not “a true story”.’

Ripped from the headlines and inspired by tales, speculation and whispers from within the intelligence community, The Kingfisher Secret focuses on the issue of today.

Yet, for political reasons, the publication that Grace works for decides to bury the story. She is then sent to Europe to resume her work as a ghostwriter for the candidate’s ex-wife, a no-nonsense Czech businesswoman who ‘writes’ a column for the publication. Grace soon stumbles on a shocking story about how the man who is about to be president has made it as far as he has, and the threat his election victory poses to the western world.

Selina Walker, Publisher of Century and Arrow, says it was vital to protect the anonymity of the author: ‘This is a story that had to be told. I realised straightaway not only how explosive the book could be, but also that our anonymous author and his secret source were at personal risk, and that we had to protect them.

‘The journey to publication has been extraordinary: communication through secure apps, password-protected material, and a flight to Canada to meet the author in absolute secrecy.

‘A gripping, hugely intriguing conspiracy thriller that has at its heart the origins of a tangled, toxic international relationship that consumes us all.’

The Kingsfisher Secret will be published on 18 October 2018.

Read an excerpt from The Kingfisher Secret

Petr Kliment held Kristína, his six-month-old granddaughter, on a patch of grass on the shore of the Jizera River. When Elena reached for Kristína, to take her away, her father kissed the baby’s chubby cheeks and bald head and spoke into her tiny ear. Elena worried he would squeeze her too hard.

‘I cannot let her go, Elenka. She is the most beautiful, best-smelling creature on the planet.’

Elena had never before seen tears in her father’s eyes.

Petr Kliment was spending more and more of his time at their country home along the river south of Mladá Boleslav.

At first it was only summers but now that he no longer had to work so much he preferred to fish earlier in the spring and later in the fall. Jana, his wife, joined him from time to time. But she preferred life in Mladá Boleslav and in Prague, now that she could live the life she was always meant to lead.

It was more pleasant and more beautiful in their apartment in the upper town. Neighbors looked up at them instead of down. They could stay in hotels in Prague, even spend ten days at the Hotel Croatia in Duga Uvala. None of their friends understood what had happened with Elena, not precisely, but Mladá Boleslav was a city of gossips. Their daughter had not defected because Petr and Jana were not sent away to work camps or thrown in prison. On the contrary, Petr and Jana had entered the quiet elite of Bohemia. They shopped at the Tuzex stores and bought blue jeans and sweets with the special cur- rency reserved for party officials.

If others envied them, it did not bother Jana one bit. She had been born into a special class and now she had returned to it. As for the advantages they sought and received: this was no different than buying and selling wares on the black market, which everyone did. There were many versions of the proverb: if we are not stealing from the state, we are stealing from our children.

If they offer it, take it; this was what Jana had always believed.

Now, Elena took the baby from her father. He wiped the tears from his eyes and shook his head. ‘I am so sad, Elenka. The feeling will not go away. It gets worse and worse.’

‘Sad to see us go, tati? Kristína and I will be back soon.’

‘I want you back for good. I want them to release you from all of this.’ Her father reached out and squeezed her arm. ‘Now that you have a baby with one of them . . .’

‘With one of them?’ She smiled. ‘He is my husband. I love him. I have a very important job, designing cars, and—’

Her father walked slowly back toward the house, a new slouch in his shoulders, as though he could tell his daughter was lying.

‘Don’t worry about him,’ said Jana. ‘This work you are doing, it is very important. You are so lucky to have these opportunities. And it has made us so happy.’

Elena hugged her mother and the driver opened the back door of the Škoda 120 GLS. She had gone from knowing nothing about cars to knowing everything about them, just as her mother had transformed from a jealous nobody into the Czech version of a society matron.

‘Will you come back soon?’ her father called.

Jana rolled her eyes. ‘When you can, Elenka. Though we would love to meet your mysterious Anthony.’