Read an excerpt from Sleeper, the new novel from Mike Nicol
More about the book! 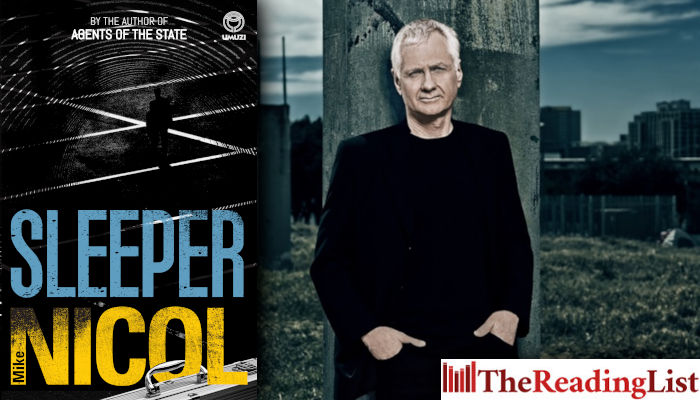 Sleeper, the new novel from Mike Nicol, is out in August 2018 from Umuzi!

First there is the killing of the minister of energy. Then the cop investigating the murder commits suicide. Fearing a conspiracy, the minister’s lover hires PI Fish Pescado to find the killer. Then she goes missing. And Fish is being stonewalled by the cops because …

… in the dark shadows of Cape Town there’s another game being played out. A complex one involving Iranian agents, the theft of highly enriched uranium, and the kidnapping of a top scientist. Ex-spy Vicki Kahn is bribed by her former handler to track the terrorists. The hunt is deadly and nothing is what it seems. A sleeper has been awoken. ISIS is involved. So is the CIA. There is chatter of a dirty bomb headed for Europe.

And Vicki is so lost in those constantly changing shadows that even her surfer-boy Fish can’t find her.

Sleeper is Mike Nicol’s 21st book. He has written novels, works of non-fiction, and poetry. His thrillers are published in the UK and the USA, and have been translated into Afrikaans, Dutch, French, and German.

His Revenge Trilogy featured in the KrimiZeit top 10 list in Germany, as did Of Cops and Robbers and Power Play, while Payback was shortlisted for the VN Thriller of the Year award in Holland and the Prix SCNF Du Polar 2016 in France. He lives in Cape Town.

Read an excerpt from Sleeper:

Miller’s Point. Fish Pescado opened the throttle. Slight twist of the wrist on the Mercury 800, eighty horsepower responded. Heard the engine cough and scream, the propeller churn, the Maryjane lift its nose. Grinned at the forward surge.

‘Still cuts it, hey.’ Fish eased back on the juice to glide the rubber ducky out of the slipway shallows into deeper water. ‘Might be old but lots of kick.’

‘What? You got a head? Too much policeman’s coffee last night? Drink better brandy, Flip.’

Flip, not looking round, giving him a raised middle finger. Fish laughed. ‘Some of you old guys’re losing the kick.’ Flip sitting up there with the anchor he was donating. Complete with a coil of rope. Brand new, classic, admiralty-style anchor. Must’ve cost him a good couple of grand. Crazy wasting money on an anchor.

Fish kept the revs low, slowly taking them out along the kelp edge towards Pyramid Rock. Even so, a chill blowback flicking at his curls. Made him hug into a long-sleeved hoodie under his life jacket. Made him wish he’d put on jeans not board shorts. The day might be sunny but it was autumn: a cold haze on the ocean, the smell of seaweed, fresh, piquant. Strings of cormorants flying low across the water. The sea with a slight rise and fall along the tideline, breaking no foam. Days like this not a wave to be had around the peninsula. You’re missing nothing if you go fishing.

Fish Pescado’s a surfer dude: blond, his mother’s blue eyes in a tanned face. He smiles, the flash of white gives the ladies a thrill.

The thing amusing Fish that morning was Flip Nel pitching up with an anchor. He didn’t get it.

Shouted now over the thrum and bounce of the rubber ducky, ‘What’s with the anchor, Flip? Guy who owned this boat before never had an anchor.’

Flip Nel shifted round on his seat, held up the anchor. ‘You got to have an anchor,’ he said. ‘You can’t just drift.’

‘No, man. You’re out on the sea, you need an anchor, I’m telling you.’ ‘It’s too deep out there,’ said Fish. ‘Never get that down to the seabed. You need a mile of rope.’

‘Sometimes there’re reefs. Sometimes you’re closer inshore.’ Flip not taking any argument. ‘What? You gonna tell me you don’t like my present?’

Fish smiled. ‘I like it.’ Man wanted to spend money on an anchor, that was his problem.

Fish was no fisherman. Wasn’t for Flip Nel, he’d never use the Maryjane. Would get rid of it. But the cop liked to dangle a line. Would talk Fish into a couple of hours on the back of the bay from time to time. Fish went with it. Especially after Flip’s old lady died. Besides, earned him brownie points he could trade for a favour when he needed cop information. Said, ‘Any place you wanna go especially?’ Waving at the wide horizon.

Flip Nel pointed towards Hangklip mountain, other side of the bay. ‘Just go. I’ll tell you when to stop.’

Been out maybe ten times with Flip Nel over the past that-many months, he still couldn’t figure this fishing jig. Okay, peaceful, quiet, relaxing place to be. You could smoke a doobie, stare at the sky, the glitter of the sea. You could … drift, cradle rocking. The doobie took Flip Nel a bit of adjustment.

Tossing him an ale from the cool box, a Jack Black Butcher Block. Flip flipped for artisanal beer. ‘Makes it easier,’ he would say. Never explained what it was.

That first weed moment the expression on Flip’s face was worth sacrificing a surf. Devil’s smoke, Flip called it. Said you got more kak from dagga than drink. Could make you woes, really off-your-head mad. Flip using the Afrikaans word, saying it voous like a beach break closing hard. All his years, Fish’d only chilled on the shoo-wah mellow vibe of the herb. His experience you had too much too often you got so laid back you couldn’t give a fig.

But Flip was adamant. ‘No, boet. Long-term it stuffs you up. Major-major.’

Fish let it end there.

Came back to the matter in hand: juiced the throttle, going in close past Pyramid Rock where the cow sharks lurked. Beyond was open water, glassy, flat. Kept the power on for fifteen, twenty minutes, till Flip held up his hand, shouted at him, ‘Ja, this’s okay. Right here.’

Right here. The middle of the bay. Right nowhere. One side Hangklip, a long way off. Other side the finger of Cape Point. Misty.

Okay. Fish cut the engine. A sudden quiet after the Mercury’s whine. Then water lap as the boat settled.

‘What you reckon we’re gonna catch out here?’ Fish shaded his eyes, looked across the sea’s surface, not a shadow of a shoal. No arriving gannets. No streams of cormorants. This was deep water. Without sand banks, without reefs. The depths. ‘You think there’ll be a passing tuna?’

Fish bent, fossicked in his bag for an Olympia deli special: ciabatta roll stuffed with salami, tomato, gherkin slivers. Bit into the crispiness, wiped a hand across his mouth. Wondered should he bring up the matter of his client straight off? Spend some brownie points on Caitlyn Suarez. Knew she was on Flip Nel’s case load. Just a decko at the file was all he wanted. Thirty minutes’d be enough.

Glanced up as the Maryjane wobbled. There was Flip balancing in the bow, anchor in hand.

Fish chewed, kept his eyes on the cop. Swallowed most of the mouthful. ‘You throw it over here, it’ll just dangle. Leave it.’ Pointed down at his bag. ‘What sort of roll you want? Ciabatta? Portuguese? Or a croissant? Bacon-and-egg croissant?’

Got no reply from Flip. Saw Flip bend over, fasten a cable tie to the anchor rope. What the?

‘Hey! Hey, Flip, man. What’re you doing?’ Noticed the other end of a double-loop cable tie around Flip Nel’s ankle.

Saw Flip Nel’s stare come on him. The skin white around the cop’s eyes. Dead, brown eyes. His face a mask. Flip seemed to say something then. A couple of words. Indistinct. Took off his life jacket, dropped it.

Watching Flip Nel put down his cellphone on the forward seat, sling the anchor overboard, the rope snaking quickly into the splash. Flip Nel following.

Had to be sixty, seventy metres to the seabed.

Fish stared at the bubbles. In time they popped, disappeared.