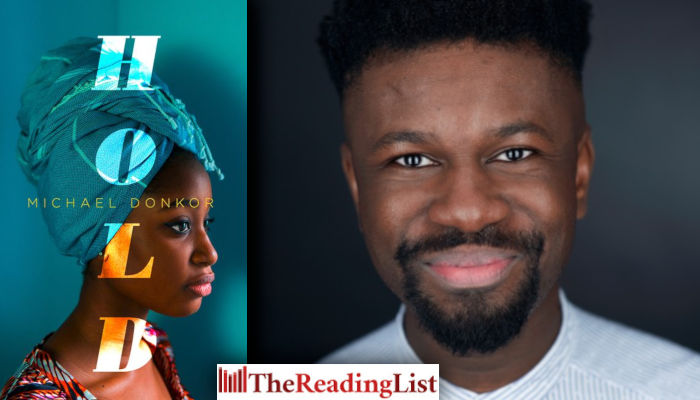 ‘You have to imagine. That’s how I told myself.’
‘Imagine what?’
‘Imagine that you are the kind of girl that can cope with it, even if you are not.’

Donkor was born in London, to Ghanaian parents, and teaches English Literature in West London. Many of the issues in this novel are close to his heart, and his writing won him a place on the Writers’ Centre Inspires Scheme in 2014, where he received a year’s mentoring from Daniel Hahn.

Belinda knows how to follow the rules. She has learnt the right way to polish water glasses, to wash and fold a hundred handkerchiefs, and to keep a tight lid on memories of the village she left behind when she came to Kumasi to be a housegirl.

Mary is still learning the rules. Eleven years old and irrepressible, the young housegirl-in-training is the little sister Belinda never had.

Amma has had enough of the rules. A straight-A pupil at her exclusive South-London school, she has always been the pride of her Ghanaian parents. Until now. Watching their once-confident teenager grow sullen and wayward, they decide that sensible Belinda might be just the shining example Amma needs.

So Belinda is summoned from Ghana to London, to befriend a troubled girl who shows no desire for her friendship. She encounters a city as bewildering as it is exciting, and as she tries to impose order on her unsettling new world, Belinda’s phonecalls back home to Mary become a lifeline.

As the Brixton summer turns to autumn, Belinda and Amma are surprised to discover the beginnings of an unexpected kinship. But when the cracks in their defences open up, the secrets they have both been holding tight to threaten to seep out …

Belinda fidgeted in the dimness. She sat up, drawing her knees and the skimpy bedsheets close to her chest. Outside, the Imam’s rising warble summoned the town’s Muslims to prayer. The dawn began to take on peaches and golds and those colours spread through the blinds, across the whitewashed walls and over the child snuffling at Belinda’s side.

All those months ago, on the morning that they had started working in Aunty and Uncle’s house, Belinda and Mary had been shown the servants’ quarters and were told that they would have to share a bed. To begin with, Belinda had found it uncomfortable: sleeping so close to a stranger, sleeping so close to someone who was not Mother. But, as with so many other things about the house, Belinda soon adapted to it and even came to like the whistling snore Mary often made. On that bed, each and every night, Mary slept in exactly the same position; with her small body coiled and her thumb stopping her mouth. Now Belinda watched Mary roll herself up even more tightly and chew on something invisible. She thought about shifting the loosened plait that swept across Mary’s forehead.

Belinda turned from Mary and moved her palms in slow circles over her temples. The headache came from having to think doubly: once for Mary, once for herself; a daily chore more draining than the plumping of Aunty and Uncle’s tasselly cushions, the washing of their smalls, the preparing of their complicated breakfasts.

Dangling her legs down and easing herself to the floor, Belinda quietly made her way to the bathroom. She stepped around the controller for the air con they never used and around the remains from the mosquito coil. She brushed by the rail on which their two tabards were hung. Belinda remembered the first time Aunty had said it – ‘tabard’ – and how confused Mary’s expression had become because of the oddness of the word and the oddness of the flowery uniform Aunty insisted they wear when they cleaned. Belinda would miss that about Mary’s face: how quickly and dramatically it could change.

Under the rusting showerhead, Belinda scrubbed with the medicinal bar of Neko. Steam rose and water splashed. In her mind Belinda heard again the sentences Aunty had promised would win Mary round. She yanked at a hair sprouting from her left, darker nipple, pulling it through bubbles. The root gathered into a frightened peak. She liked the sensation.

Returning to the bedroom, in the small mirror she was ridiculous: the heaped towel like a silly crown. For a moment, she forgot the day’s requirements, and flicking her heels she pranced across the thin rug. Would Amma like that? Might jokes help heal that broken London girl? Or perhaps Belinda would be too embarrassed.

Mary shot up from beneath the covers and launched herself at Belinda’s chest. Belinda pushed her off and Mary lost her balance, fell onto the bed.

‘What is this? Are you a –? Are you a stupid –’ Belinda lifted the towel higher. ‘Grabbing for whatever you want, eh?’

‘What you worried for?’ Mary arched an eyebrow. ‘I have seen all before. Nothing to be ashamed for. And we both knowing there is gap beneath shower door and I’m never pretending to be quiet about my watchings neither. You probably heard me while I was doing my staring. Even maybe you seen my tiny eye looking up,’ Mary squinted hard, ‘and you’ve never said nothing about nothing. So I think you must relax now. I only’ – Mary tilted her head left, right, left – ‘wanted to see how yours are different from mine.’