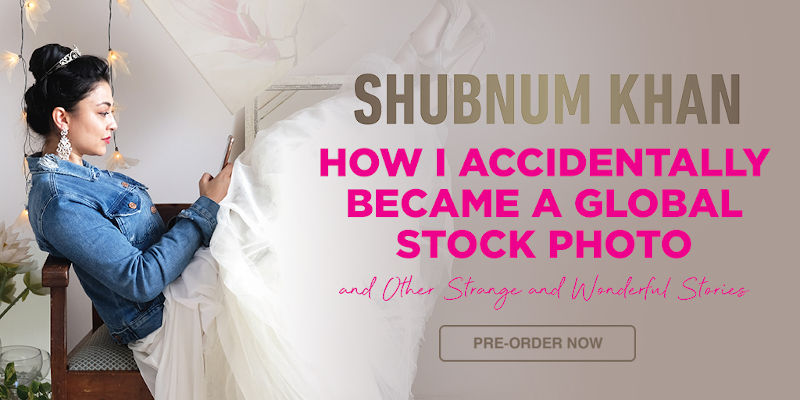 How I Accidentally Became a Global Stock Photo: And Other Strange And Wonderful Stories by Shubnum Khan is out in April 2021 from Pan Macmillan!

The book is described as ‘part memoir, part travelogue and part love letter’.

The author shared a cover reveal video on Twitter:

COVER REVEAL: I interrupted my mother in the MIDDLE of rolling rotis to shoot this and I am so awkward and weird and now I have flour all over my phone but it’s the cover for my new book! #ShubnumStories pic.twitter.com/f14QLtes4D

How I Accidentally Became a Global Stock Photo is part memoir, part travelogue and part love letter. Shubnum Khan takes the reader on a journey around the world.

Whether it is teaching children in a remote village in the Himalayas, attending a writers’ residency where the movie The Blair Witch Project was shot, getting pulled out of the ocean in Turkey or becoming a bride on a rooftop in Shanghai, Khan is quirky, moving and vulnerable in what she shares.

Khan offers an introspective reflection on what it means to be a woman, particularly a single Muslim woman in South Africa, trying to find herself in a modern world. The stories are drawn from her life journey, which has been full of unexpected twists and turns, and are interspersed with reflections on culture and religion as well as musings on family, relationships and love.

The Mindy Project meets Bridget Jones’s Diary with a side of Keeping Up With The Kandasamys, this is a book about holding onto hope and a reminder that once ‘you step off the edge, anything can happen’.