‘My shop was filled with people from Pretoria to Port Shepstone’ – Read an excerpt from The Tearoom by Gretchen Haley
More about the book! 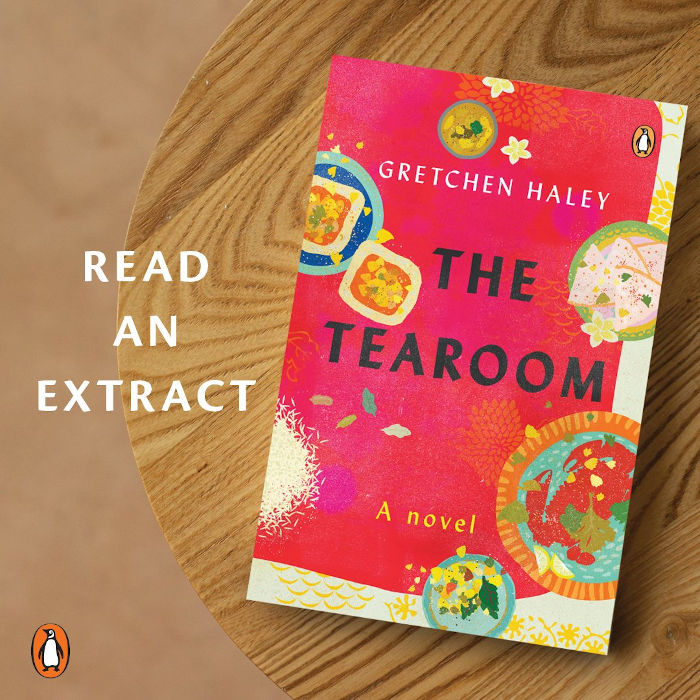 Penguin Random House has shared an extract from The Tearoom by Gretchen Haley.

Tubby Reddy has a plan simmering in his kitchen …

Meet Thirapatheegadu Ezekiel Reddy, Tubby for short, because heaven knows a man called Thirapatheegadu walks a lonely road. Proud proprietor of The Tearoom in deepest KwaZulu-Natal, he’s also a father, a timid dreamer and the long-suffering husband of hypochondriac Lynette. For many years, Tubby has been working on a marvellous plan which involves the object of his affection – his enigmatic kitchen assistant.

In the month before his birthday, the countdown begins. But just as Tubby is set to embark on his dream life, he is delivered a blow which could turn his dream to ashes.

Sprinkled with delicious humour and spoonfuls of local flavour, The Tearoom is a warm tale with characters you’ll never forget.

By four-thirty I was sold out for the day. My last customer was Gayle Nair who, like me and many others, went by a name that wasn’t on her birth certificate. Her first name was actually Gaithrie. I didn’t let on. Gayle was a widow and a magistrate and she dressed in way that demonstrated both these facts. Her son, a delightful young man named Lloyd, was studying law like his mother, though I knew his real passion was interior decorating.

Gayle worked hard on speaking in such a manner that you’d never guess she was from Usendleleni (or ‘Sendleni’ as we called it). She was a regular because she seldom cooked. I suspected this wasn’t because she couldn’t, but rather because she wanted to set herself apart from other Indian women who were known for slaving over hot stoves. Her manner of speaking was brusque.

‘Tubby, I hear you’re out of the mince-and-methi.’

‘I was looking forward to that.’

Mafika handed her the packet and she pulled out a two hundred-rand note from her purse.

‘How’s Lloyd?’ I asked. I’m a firm believer in pleasantries.

She thanked me and left.

I decided to go home early. Cashed up everything except for Gayle’s two hundred rand, leaving Mafika and Yogi to lock up. I pulled my apron over my head and hung it on the hook in the kitchen. Usually I’d leave later, but I needed the fresh air. There was a lot on my mind. It was the first of September and in a few weeks I’d be turning fifty. Everything was mapped out. The plans, telephone numbers, account numbers were written down in the soft-cover diary. The money hidden in a safe behind Ma’s photo in my kitchen.

I enjoyed the walk home that day. A lone cricket creaked somewhere in the grass and there were boys still playing cricket as I passed the grounds. I smiled at the thought of this homonym – cricket and cricket. Words pleased me.

‘Hello, Uncle Tubby!’ some of the boys called out.

They call me Tubby, can you believe that? I know I’m slightly wide around my middle but not so much that I deserve to be stuck with this name. Big Annayya gave it to me when I was five years old. Said I reminded him of a goolgoola, round and sweet. Forty-four years later and people still don’t know that my name is Thirapatheegadu Ezekiel Reddy. When I was in high school I tried to encourage them to use Ezekiel. I even introduced myself as ‘Zeke’ just like the Americans do, but it didn’t take. Probably just as well. Heaven knows a man called Thirapatheegadu walks a lonely road. It doesn’t bother me any more. Like Shakespeare said, ‘a rose by any other name would smell just as sweet’. So Tubby Reddy it is.

My mother, God rest her soul, named me after her favourite brother who died when he was young. She lavished on me all the love she would have given him if he were still alive.

My earliest memory is of sitting on a wooden bench in the kitchen while Ma cooked and sang and talked to me. And her food … Every drop of preciousness that she thought I was, she added in each bite. I kept a photo of her on my kitchen wall and when people came from far and wide to eat my food, I gave her all the credit.

We didn’t keep a menu. There was no à la carte and all that.

We only made good food. Food you’d remember for all the right reasons. I cooked two different dishes every day. A curry, usually a staple like mutton or chicken, then I’d make something you wouldn’t encounter in your average restaurant, like herbs and gadra beans or kingklip with kitchari. We always served rice, roti, dhal and salad. Other than that, the selection was limited. The flavour, however, was not.

My establishment was a small one. Though technically a restaurant, it wasn’t a typical dining place. I leant more towards the term ‘tearoom’, as it would have been called it in Ma’s day.

I opened The Tearoom more than twenty years ago. At the time, I was working at a branch of the South African Post Office, and starting the business was realising a dream. A job that allowed me to do two of my favourite things – cook and read. I immediately hired Aunty Mother to help with the cutting and peeling and Zama to clean. Paulinah, Aunty Mother’s daughter, came later to help in the kitchen. Then came Yogi. She was excellent with flour and made rotis that were light as a tissue in your hand. Her samoosas were morsels of absolute joy.

Next was Mafika, sixteen at the time, orphaned and barefoot, which is how he’d walked all the way from Zululand. I initially took him on board to help with getting the fires going in the morning. Then he started fetching the produce. Later he manned the desk because his deep dimple and affable manner made him an excellent front man.

By eleven each morning, additional staff would arrive to wait tables and wash dishes. Over the years, staff had come and gone, but behind the scenes were the six of us. We had been together from the start and were as close as any family.

My shop was filled with people from Pretoria to Port Shepstone and further afield. There was a homely, relaxed atmosphere at any given moment, and most people from around the area knew me well. They knew my children and my wife, they talked to me, and sometimes they’d invite me to join them for a dop. I didn’t say no. I enjoyed a nice cold one every now and then, to take a load off. But even so, I was a lonely man.