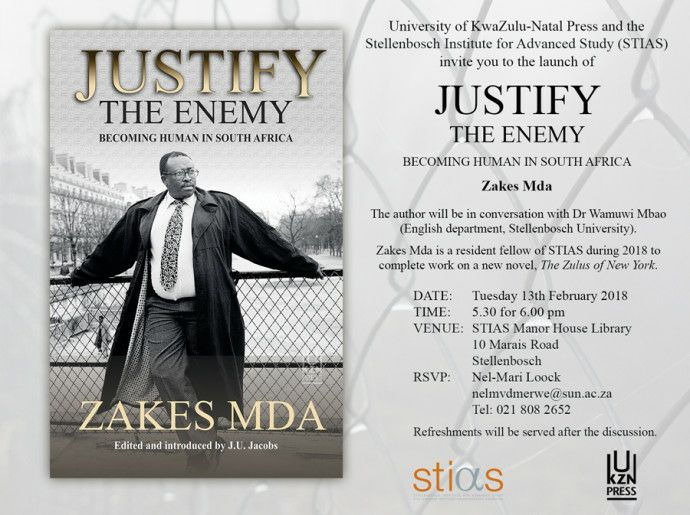 UKZN Press and the Stellenbosch Institute for Advanced Study invite you to the launch of Justify the Enemy: Becoming Human in South Africa by Zakes Mda.

Mda will be in converation with Dr Wamuwi Mbao of Stellenbosch University.

Justify the Enemy is a collection of non-fiction by the prolific author, showcasing his role as a public intellectual with the inclusion of public lectures, essays and media articles. Mda focuses on South Africa’s history and the present, identity and belonging, the art of writing, human rights, global warming and why he is unable to keep silent on abuses of power.

Mda was born in Herschel in the Eastern Cape in 1948 and studied in South Africa, Lesotho and the United States. He wrote his first short story at the age of 15 and has since won major South African and British literary awards for his novels and plays. His writing has been translated into 20 languages. Mda is a professor of Creative Writing at Ohio University.

JU Jacobs is an emeritus professor and senior research associate at the University of KwaZulu-Natal. He is the co-editor of Ways of Writing: Critical Essays on Zakes Mda (2009) and author of Diaspora and Identity in South African Fiction (2016).