‘I never saw it as my goal to make everyone happy; the goal is to solve crime.’
More about the book! 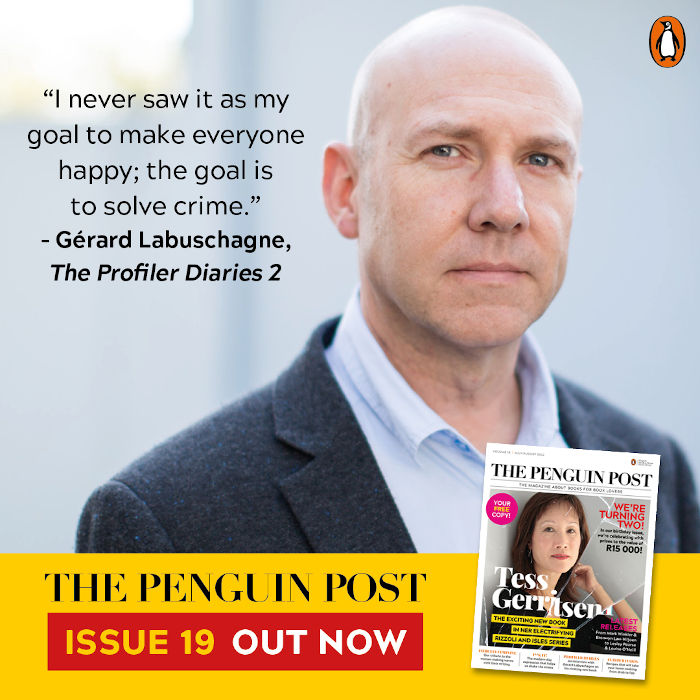 Dr Gérard Labuschagne was the head of the SAPS’s specialised Investigative Psychology Section, the only unit mandated to profile offenders, for 14 and a half years, during which time he analysed 110 murder series and countless other bizarre crimes.

He writes here about the one case his wishes he’s worked on, his most challenging case and understanding the criminal mind.

‘Each criminal is interesting for different reasons.’

People are fascinated with true crime. I tend to think it’s because it’s real – it could happen to any one of us – and there’s a kind of satisfaction that comes from the ‘happy’ ending; of seeing justice done when the perpetrator is brought to book. Perhaps that makes people feel safe.

Also, truth is indeed stranger than fiction. If you look at the cases discussed in true crime, they tend to be bizarre in some way, like American serial murderer Jeffrey Dahmer, who is the one case in history I wish I’d worked on. He had such a wide range of strange behaviour, such as eating his victims’ organs and collecting their bones. I did get to interview our South African version (to some degree), Stewart ‘Boetie Boer’ Wilken from Port Elizabeth, after he was convicted. He was found guilty in 1998 for seven counts of murder and two of sodomy, for which he received seven life terms. Amongst his other offences, Wilken confessed to murdering his 11-year-old daughter and sleeping next to her corpse each night until she had decomposed into a skeleton.

But each criminal is interesting for different reasons. Most recently, because of my interest in threat assessment, I find Morné Harmse, the Krugersdorp School Sword offender (who I discuss in my book), quite fascinating. In finding out more about an offender, the best way to assess their personality is to interview them and the people they interact with. In fact, I often find interviewing the people around the person (for example, friends, family and co-workers) gives the best understanding of their personality. However, we also try to make some broad categorisations from a crime scene by looking at what the person has done to the victim.

And each case presents its own unique challenges, as I discuss in my Profiler Diaries books. Sometimes it’s that there is very little evidence to go on. Other times, it’s political interference, or internal struggles with the police itself. One of my most challenging cases was the murder of Andrea Venter by Gerhard Jansen van Vuuren in May 2011.

What should have been an open-and-shut case has been dragged out for 11 years. Initially, we successfully opposed bail, but this was appealed and granted by the High Court a few months later, despite our concerns. Jansen van Vuuren then fled the country a week before his 2013 trial, and we had to track him down, eventually finding him in Brazil, where he was subsequently arrested. Then, while awaiting extradition, about two years after his Brazil arrest, he was suspiciously released by a judge one night, and it was another four years before we could track him down again. He was eventually extradited back to SA in 2020 and convicted in 2022. I haven’t bore the brunt for my work, touch wood, but I’m very aware that Jansen van Vuuren really doesn’t like me.

In fact, I know quite a few people in correctional services and from them I have heard of a few convicted suspects in whose cases I testified (typically at sentencing) who still speak about me in not so friendly terms. It comes with the territory. I never saw it as my goal to make everyone feel good and happy; the goal is to solve crime.

The same can be said for working with police officers and investigators. It can be challenging to balance independent thinking while cooperating with a host of other professionals, but everyone has something to contribute. You just have to make sure that peoples’ ears and minds are open to what you have to say, which is a skill on its own. I was always interested to hear the views of others in the team, and when you show people that you want to listen to their view, it’s easier to express your views, too. It did also help that I was a Brigadier … people kind of have to listen to what you say.

It is difficult to step away from the job with this kind of work, especially while I was in the police. It’s never ending. There are always cases that need attention and crime scenes and arrests don’t only take place during office hours. You can never really step away, but you need to focus on positive things like family and friends. And holding on to the hope that people will start focusing more on doing what’s good for society. We could all do with a more caring society.

The Profiler Diaries 2 is out now.

In this second instalment of the bestselling The Profiler Diaries, former South African Police Service (SAPS) head profiler Dr Gérard Labuschagne, successor to the legendary Micki Pistorius, recalls more of the 110 murder series and countless other bizarre crimes he analysed during his career.

An expert on serial murder and rape cases, Labuschagne saw it all in his 14 and a half years in the SAPS. The new chapters include tracking down a prolific serial stalker, psychologically assessing a schoolboy Samurai killer, linking the murders of two young women in Knysna, and apprehending a serial murderer of sex workers, among other intriguing – and often terrifying – cases.

As Labuschagne says, catching a killer is one thing; getting them convicted in a court of law is an entirely different ball game. This book shows how it is done in fascinating detail.