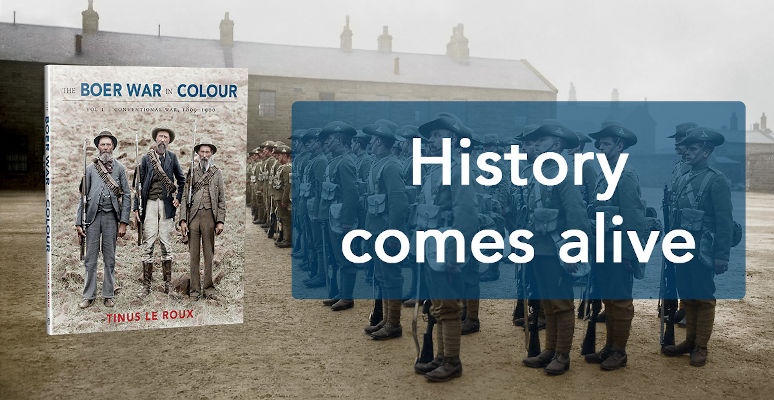 The Boer War in Colour by Tinus le Roux is out now from Jonathan Ball Publishers.

Infused with colour, scenes from the Anglo-Boer War suddenly come to life in this striking collection of colourised photos from one of the biggest conflicts on South African soil.

The Anglo-Boer War, or South African War, pitted the two Boer republics of Transvaal and the Orange Free State against British imperial might. The effects of this devastating war on the political, economic and social landscape were felt long after its end.

Volume 1 covers the conventional part of the war from October 1899 to June 1900 when Lord Roberts occupied the Boer republics. The photos show the Boer strikes into Natal and the Cape Colony, the sieges of British garrison towns at Ladysmith, Kimberley and Mafeking, as well as some of the major battles of the war.

The Boer War in Colour contains many iconic photos from the war, as well as several previously unpublished images. Over the past 120 years, hundreds of books on the Anglo-Boer War have been published, but this will be the first to show this conflict in full colour – introducing a fresh perspective and transforming it into living history.

Tinus le Roux is a military history enthusiast who started colourising Anglo-Boer War images in 2014. He also colourises World War II images, specifically those related to the South African Air Force. Several of his colourised images have been published in books and his Facebook page, Boer War Colourised Photographs, has thousands of loyal followers. When he is not colourising images or racing on his mountain bike, Le Roux runs a flour milling company in Cape Town. He previously worked as a design engineer at Denel.