Friday Night Book Club: Read the first chapter of TL Huchu’s new novel The Library of the Dead
More about the book! 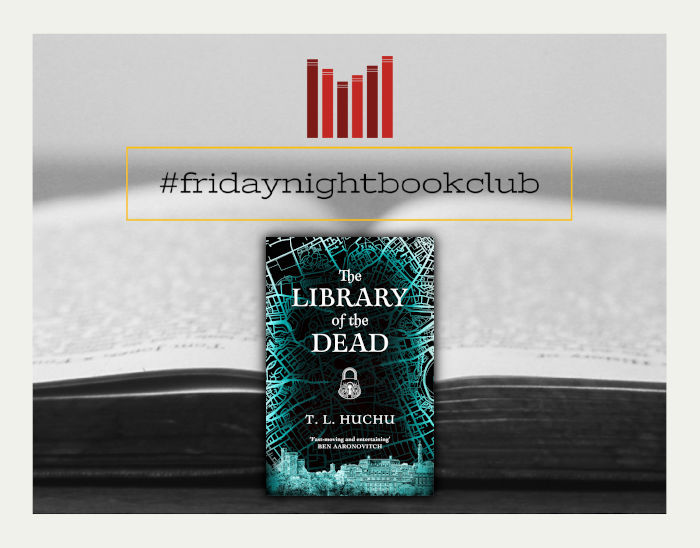 Treat yourself to a glass of wine this evening and this excerpt from The Library of the Dead, the new book by TL Huchu.

Opening up a world of magic and adventure, The Library of the Dead is the first book in the Edinburgh Nights series.

When ghosts talk, she will listen …

Ropa dropped out of school to become a ghostalker – and she now speaks to Edinburgh’s dead, carrying messages to the living. A girl’s gotta earn a living, and it seems harmless enough. Until, that is, the dead whisper that someone’s bewitching children – leaving them husks, empty of joy and life. It’s on Ropa’s patch, so she feels honour bound to investigate. But what she learns will change her world.

She’ll dice with death (not part of her life plan …) as she calls on Zimbabwean magic and Scottish pragmatism to hunt down clues. For Edinburgh hides a wealth of secrets. And in the process, she discovers an occult library and some unexpected allies. Yet as shadows lengthen, will the hunter become the hunted?

‘One of the strangest and most compelling fantasy worlds you’ll see all year.’ – SFX

I’m really not supposed to be doing this, but a girl’s gotta get paid. So, here we go.

It’s been a long day. Super long. Hiked up the B702, all the way up to Liberton, doing my deliveries, and swung back round the bypass, last stop Lanark Road in Juniper Green. I make that a fifteen-mile trip around Edinburgh, give or take a few. My quads ache and I’ve got chunks of hot lead for feet. Feels good to sit my butt on this sofa and veg for a mo.

‘Would you like a cup of tea?’ Mrs McGregor asks.

‘Only if you’re offering biscuits,’ I say. Always squeeze ’em for more, and I’m famished like them Oxfam poster kids.

Mrs McGregor raises her eyebrows, opens her mouth, thinks better of it and shuts it again. They need me.

‘I’ll help you, dear,’ Mr McGregor says in a rich, gravelly voice. He gets up and the two of them head off to the kitchen.

I’m taking liberties ’cause them two are so minted it’s enough to set off my allergies. Look at the size of this place. Even have to take off my coat, it’s sweltering inside. This is one of them nineteenth-century stone cottages, so sturdy it could last another three hundred years. Built when land was aplenty, everything’s on the same level, save for the loft conversion. The McGregors are really proud of this place; soon as I got here they were yakking on about it. Said, ‘Did you know Thomas Carlyle and his young wife Jane Welsh stayed in this exact cottage after they got married?’ I shook my head even though I’d read the wee blue plaque on the front gate. Now, I’m not one to judge, but if I got married, I’d want to honeymoon somewhere exotic, like Ireland or some such place, not flipping Juniper Green. Each to their own and all that. ‘You do know who Thomas Carlyle is, right?’ they’d said in unison. I pretended not to know and let them yak on. Must be something they do to whoever winds up on their doorstep.

I’m no buff or nothing, but I like history as much as the next lass, and so I do know Carlyle was a historian who wrote this and that back in the day. He was into heroes and great men, had something to say about how they influenced the course of human history. Always just men, never boys and girls, and seldom women. I didn’t tell the McGregors that I found his wife Jane more interesting.

There’s a framed print of Carlyle above the fireplace directly in front of me. He’s an older dude, greying hair and well-kept beard. Rests his head tilted slightly left on his hand, index finger running up to his temple, thumb tucked under his jaw and the other three folded in. Posed to make him look like a thinker, brow lightly creased, but there’s also a dreamy look in his eyes that’s kinda endearing. I swear the old historian comes out like he’s on a telephone to the future. Don’t know if he had our shabby present in mind, though. His was a time of voyages. A time of weird and wonderful new things flowing in from the far-flung outposts of the British Empire via the Port of Leith – now all we get is flotsam washing back. They believed in progress in them days, high-minded ideas and all that jazz. Now we can’t even look past tomorrow. The historian swallowed up by history … ain’t time a right bastard?

I sink back into the cushions on the couple’s large sofa. The room’s stuck in some past era along with the Carlyles. Light shade of terracotta paint on the walls, antique chest serving as the coffee table, copper bucket with tongs by the fireplace, and an old-style rocking chair in one corner. The carpet under my feet looks Persian but could be from anywhere. It’s well worn; the threadbare look gives it that aged feel this room’s going for.

It’s dark outside the massive windows. The light from this room bathes the hedges outside in an ominous shade. The sound of the McGregors pottering in the kitchen drifts out to me. Mrs McGregor is a small woman and her husband is more long than tall – it’s like a Great Dane married a Cockapoo.

‘I’m not sure about this,’ Mrs McGregor says. They’re trying to be quiet. Failing miserably. I hear the sound of something metallic hitting the counter.

‘She does look a bit young,’ Mr McGregor replies. ‘What is she, twelve? She’s got green dreadlocks and black lipstick, for Christ’s sake. What is that even – goth, punk, I don’t know.’

‘I was told we were getting an older woman with experience. I think we should—’

Things go quiet in the kitchen. Very quiet. Only the noise of the boiling kettle filters through. I rub my hands on my thighs. Shouldn’t have said anything, but I’m tired and hungry and that makes me irritable. And I’m not messing about. I’ve come to do a job – I need the money.

The McGregors come back in with red faces and my tea. There’s a slight tremor in Mrs McGregor’s hands as she places the tray down in front of me. I grab a scone, bite it and feel better right away. Tasty, must be home-made, and just the right spread of butter on it too.

‘I know you called for my grandma, but she don’t do house calls no more. I’ll take care of it for you,’ I say, chow in my mouth. I wash it down with tea from a proper china cup. I’m even tempted to hold a pinkie out.

‘We didn’t mean to … It’s just that we’ve had some people try to take care of this problem before and it hasn’t exactly worked out as planned,’ Mrs McGregor says.