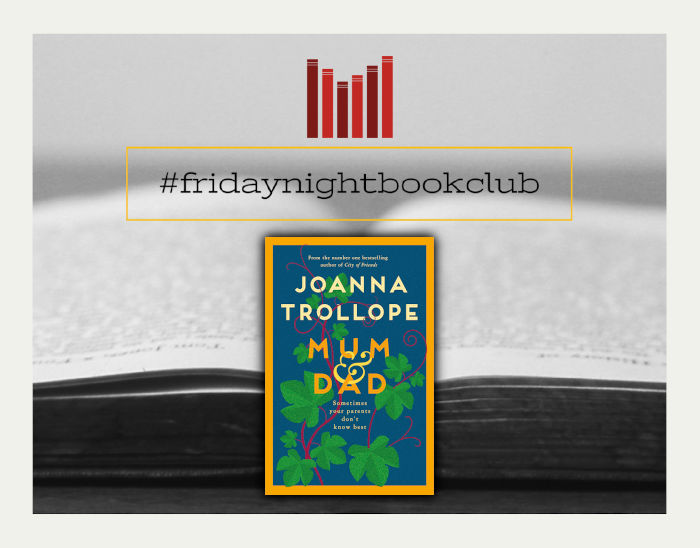 Staying in this evening? Of course you are! Get comfortable with some popcorn and an excerpt from Mum & Dad – the latest novel from bestselling author Joanna Trollope!

Mum & Dad explores the issues at the heart of a modern family, with Trollope’s trademark wit and warmth.

‘What a mess, she thought now … what a bloody, unholy mess the whole family has got itself into.’

It’s been 25 years since Gus and Monica left England to start a new life in Spain, building a vineyard and wine business from the ground up. However, when Gus suffers a stroke and their idyllic Mediterranean life is thrown into upheaval, it’s left to their three grown-up children in London to step in …

Sebastian is busy running his company with his wife, Anna, who’s never quite seen eye-to-eye with her mother-in-law.

Katie, a successful solicitor in the City, is distracted by the problems with her long-term partner, Nic, and the secretive lives of their three daughters.

And Jake, ever the easy-going optimist, is determined to convince his new wife, Bella, that moving to Spain with their 18-month-old would be a good idea.

As the children descend on the vineyard, it becomes clear that each has their own idea of how best to handle their mum and dad, as well as the family business. But as long-simmering resentments rise to the surface and tensions reach breaking point, can the family ties prove strong enough to keep them together?

This was Monica’s favourite time of day, these early mornings – dawns, really, and surprisingly dark, even in southern Spain – when nobody except the village cockerels appeared to be up. The cockerels started an hour before she did, and the villagers took no notice of them, but Monica heard them with pleasure. They were a sort of signal to take her morning cup of tea, made with leaves sent from England, out onto the terrace and stand there, sipping, while the light slowly brightened below her to reveal the Rock of Gibraltar, like a great war horse plunging towards Africa, thirty kilometres away. It was miraculous, that moment. Every morning, without fail, through autumn mists and spring downpours, the rearing Rock and the cascading mountainsides down to it gave Monica a feeling of exultation that no place or landscape had ever given her in her life before. Not even the magnificence of the West Highlands, where she’d started life, sixty-eight years before. Life in Spain, and accommodating herself to her husband’s stubbornness, hadn’t exactly been easy, but this morning ritual of tea on the terrace while watching the day steal up on the night was one of the day’s unlooked-for bonuses.

The terrace, of course, once it was fully light, revealed its perpetual neediness. Some plants – the disappointingly scentless plumbago, for example – seemed to have no trouble in thriving, tumbling over walls in extravagant abundance, dense pale blue flowerheads mingling with the deep, almost violet blue of the convolvulus, which grew everywhere, in profusion, if she didn’t keep a sharp eye on it. But some bougainvilleas behaved, Monica thought, extremely neurotically, perpetually and fretfully shedding papery leaves and petals onto the terrace that she had to remind Pilar to sweep up. Pilar considered outdoors as another planet, a planet ruled by men with all their attendant idiosyncrasies, and properly inhabited by animals and machinery and weather. Outdoors was nothing to do with her. She said as much to Monica, volubly and constantly, banging her broom about the terrace. ‘Why are you English so obsessed with stupid flowers? Can you eat them?’

Pilar had worked for Monica since 1994, when she had been a nineteen-year-old from the village with parents who could neither read nor write. Her father, who was still alive, kept rabbits for the table in a ruined shed, fattening them with bread and water in the dark. Monica had protested both to Pilar and to her father about the cruelty of keeping rabbits in such dreadful conditions, and the old man had stared at her, shaking his head, as if confronting someone certifiably insane. Monica had rounded on Pilar.

‘The way you treat animals is a disgrace to humanity. It really is. Those poor, poor rabbits. Don’t you understand?’

Pilar leaned on the mop she was using to wash the kitchen floor.

‘You think it’s cruel? If you want to see real cruelty, you should go to North Africa, to the Rif Mountains. Those donkeys can hardly move, for their burdens!’ She brandished the mop. ‘Go and water your silly flowers.’

Sometimes, Monica thought she had had quite enough of Pilar. Just as she thought she had had quite enough of Gus, too. At twenty-three she’d had every sympathy with Gus’s rage and despair at his own father’s obtuse intractability and the consequent terrible quarrels that resulted in their abandoning England for Spain in 1993, old Gus bellowing that Spain, in all its post-Franco confusion, was welcome to his useless, disloyal eldest son. Old Gus would have been a figure of fun if he hadn’t been so powerful and if her Gus hadn’t craved his father’s approval and affection so pitifully. It was old Gus who named the Spanish vineyard in the end too, the vineyard they’d had to sell everything in England to start, despite her objections.

‘Don’t you see?’ she’d said pleadingly to Gus. ‘Don’t you see what he’s doing? He’s suggested Beacham’s Bodega as a joke, a contemptuous joke. As if running a bodega is all you’re fit for. As if we weren’t having to leave two of our children at school in England—’

‘Paid for by my father.’
‘But I don’t want him to!’
Gus looked away from her.
He said, quietly, ‘All the same.’
‘Do you even know what a bodega is?’
‘No.’
‘It’s just a shop. A little shop, selling groceries and wine. It’s a belittling name for a proper vineyard like you’re planning. Can’t you see that?’

Gus squinted past her.

‘All the same,’ he repeated, ‘it alliterates. The Spanish can at least manage the initials.’

He had looked at her for the first time in that conversation. Still handsome Gus then, blond and blue-eyed with rolled-up shirtsleeves and bare feet in cotton espadrilles.

‘Because,’ he said, ‘I actually think Beacham’s Bodega is a very good name.’

And that was that. Sebastian and Katie stayed – miserably, in Katie’s case – at their English schools and the rocky, unpromising stretch of virgin land just west of one of the famous pueblos blancos became their vineyard. Gus had done his homework, she had to give him that. The soil of the vineyard was almost identical to the soil of the Rioja region. There were two rivers nearby which cooled and watered the air and the earth. There were also crucial warm winds blowing up from Africa, but cooler winds at night, which would encourage the grapes Gus was planning on planting to develop the thick skins so beneficial to red wine.

He bought hundreds of Tempranillo vines, all of which had to be planted in the newly cleared, newly turned earth, five feet apart and positioned to shoot vertically. Along with four men hired from the village, Gus worked doggedly all the daylight hours, only stopping when Monica, adding the task of project managing the building of their future house to the business of being Gus’s wife and the mother of three children, demanded he give his attention to some essential decision about construction.

‘I don’t care where the bathrooms are,’ Gus said. ‘You mind about that far more than I do. You decide what you want and that’s fine by me.’

He was dusty and sweaty from planting. He had a ragged blue bandana tied around his throat, above a faded T-shirt. He’d leaned forward and kissed her.

So she had designed the house – long and low to take advantage of the view – with occasional input from Jake, her youngest child. She had been thankful, on a daily basis, for this village girl called Pilar, who managed to clean their small village house, and rough launder their clothes, and who often arrived in the mornings with a basket of vegetables from her father’s huerta, outside the village.

‘A huerta?’ Monica asked in her careful new Spanish.

‘He goes there every day,’ Pilar said, her arms full of sheets she’d dried on the bushes outside, ‘to get away from my mum. All the men do. It’s the only time they aren’t nagged.’

‘But I thought,’ Monica said, ‘that this was a society famous for machismo.’

‘It is,’ Pilar replied. She dumped the sheets on the table and began, rapidly, to fold them. She didn’t look at Monica. ‘Things go wrong for men …’ She sucked her teeth. ‘Wham, their women suffer.’

‘You have to accept,’ Pilar said, still folding, ‘you come from one culture. Here is another. Different. You want to live here? You accept.’

Over the years, Monica thought now, she’d got less good at accepting. At the beginning, she’d given way to Gus’s determination, bent to submit to Pilar, worried endlessly about the children, how their parents’ abrupt change of lifestyle was affecting them – had never stopped worrying, in fact, however good their Spanish was now, especially Jake’s. For goodness’ sake, Sebastian was forty-three and married with sons of his own. Katie – Monica felt the pang of remorseful anguish that she experienced every time she thought of Katie – was forty-one and had been living with Nic for almost twenty years now, and was the mother of three daughters. And Jake, darling, easy, sunny Jake, had finally married his Bella after all those years of living together because of Mouse, who was eighteen months old and whom Monica saw most days on FaceTime, putting bubbles on her head in the bath or drinking noisily from her sippy cup. Six grandchildren in England, even if Gibraltar airport was only just over an hour away. Six grandchildren, never mind three children and their three partners. Thank goodness, at least, that old Gus was finally dead and that her own parents, who had been admirably self-sufficient all their lives, had managed their final years in the same spirit of competence. ‘You would hardly believe,’ Monica’s brother wrote to her after their father’s death, ‘the order in which he left their affairs. All I’ve had to do is follow his precise instructions. I don’t know about you, but I’m left with the feeling that they chose to be strangers to everyone except each other, even their children. What do you want me to do with your share of the money from selling the house?’

‘I propose,’ Monica said to Gus, ‘giving it to the children.’

He was hunched over his computer. The office, despite the occasional presence of a secretary who drove all the way from Ronda, was crammed and chaotic, and had never moved from the tiny room next to the fermentation tanks. Gus was absolutely insistent on bioculture, on the organic nature of everything in the vineyard – when the grapes had been harvested in September, the vines were left to rot and then Grazalema sheep were turned out to finish the job – but that meticulousness didn’t extend to his surroundings. Monica stood, as she often stood, leaning against the outer doorframe of the office.