New book alert! Two Tons o’ Fun by Fred Khumalo (PLUS: Enter to win a copy!)
More about the book! 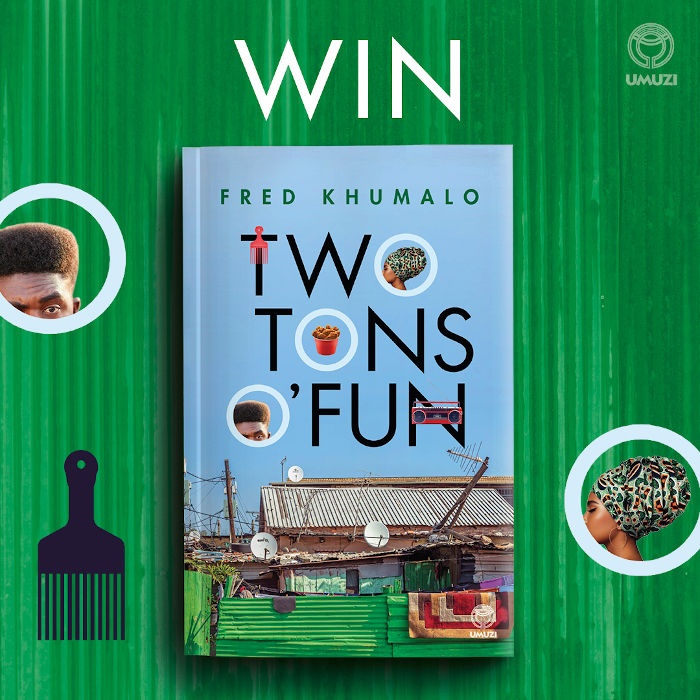 Fred Khumalo’s Two Tons o’ Fun – a charming coming-of-age novel set in a Johannesburg township – is out now from Umuzi!

I caught a glimpse of my mother busy stuffing her own loot into a bag. On seeing me, she grinned. ‘Are you on a sight-seeing trip, girl? Come on, roll up your sleeves and work!’ She was a huge woman with the agility of a thin girl. Think of the well-endowed Queen Latifah moving like Sho Madjozi.

A car has collided with a Coca-Cola truck in Alexandra. The overturned trailer is spilling its contents, which residents are carrying off in their plastic ‘Shangaan Gucci’ bags. With two other bystanders, Lerato Morolong, age fourteen, helps the injured truck driver. The woman who drives them to hospital is Professor Ngobese, matriarch of the family at Number 80, the only house in the neighbourhood with a street address, aka Those White People.

Here begins Lerato’s relationship with the Ngobeses – Auntie Gugu and her daughter Janine, who becomes Lerato’s bf and one half of the dancing duo, Two Tons o’ Fun (because life’s too short to spend in a tent dress).

As Lerato’s story unfolds, you’ll meet her quick-fingered, beer-loving, man-eating mom June-Rose, who’s not afraid to use the knife she keeps in her bra, and has passed on her tough survivor’s spirit to her daughters, especially 12-year-old Florence. When June-Rose brings home yet another man, Florence runs away with dire consequences. Revelations emerge, such as the truth about Lerato’s father, who lost his way in the conflicts at the end of apartheid.

Rich and humorous, this vibrant coming-of-age story sees a young woman uncover her skill as a writer, explore her sexuality, travel, and finally understand her mother.

To stand a chance of winning, simply complete the online competition form here.

The cut-off date for entries is 28 February 2022. Terms and Conditions apply.

Fred Khumalo completed his MA in creative writing from Wits University with distinction and is the recipient of a Nieman Fellowship from Harvard University. His writing has appeared in various publications, including the Sunday Times, the Toronto Star, New African magazine, the Sowetan and Isolezwe. In 2008, he hosted Encounters, a public-debate television programme, on SABC 2. His books include Bitches’ Brew, Seven Steps to Heaven, Touch My Blood, Dancing the Death Drill and The Longest March.