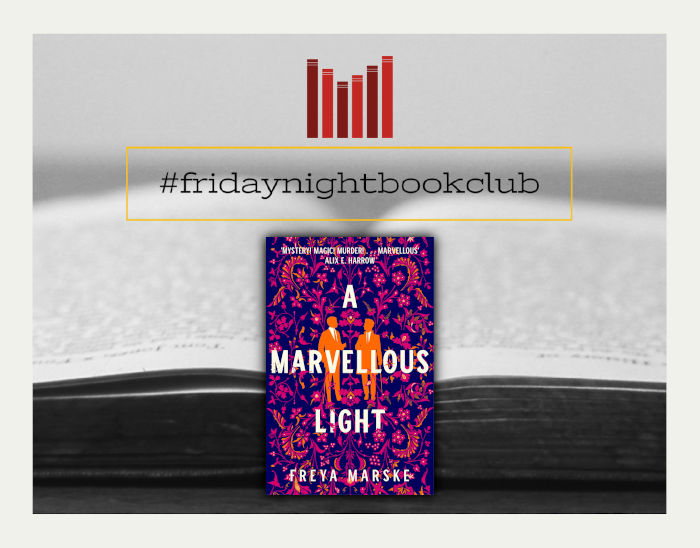 Treat yourself to a mug of hot chocolate this evening and this excerpt from Freya Marske’s A Marvellous Light – a comedy of manners, manor houses, and hedge mazes, including a magic-infused murder mystery and a delightful queer romance, set in an alternative Edwardian England.

‘Mystery! Magic! Murder! … This book is a confection, both marvellous and light’ – Alix E. Harrow, author of The Ten Thousand Doors of January

For fans of Georgette Heyer or Julia Quinn’s Bridgerton, who’d like to welcome magic into their lives …

Young baronet Robin Blyth thought he was taking up a minor governmental post. However, he’s actually been appointed parliamentary liaison to a secret magical society. If it weren’t for this administrative error, he’d never have discovered the incredible magic underlying his world.

Cursed by mysterious attackers and plagued by visions, Robin becomes determined to drag answers from his missing predecessor – but he’ll need the help of Edwin Courcey, his hostile magical-society counterpart. Unwillingly thrown together, Robin and Edwin will discover a plot that threatens every magician in the British Isles.

Reginald Gatling’s doom found him beneath an oak tree, on the last Sunday of a fast-fading summer.

He sat breathing rapidly and with needle-stabs at each breath, propped against the oak. His legs were unfelt and unmoving like lumps of wax that had somehow been affixed to the rest of him. Resting his hands on the numb bulk of them made him want to vomit, so he clutched weakly at grass instead. The tree’s rough bark found skin through one of the tears in his bloodstained shirt. The tears were his own fault; he hadn’t started to run in time, and so the best route of escape had appeared to be through a tangle of bramble-hedge that edged the lake here in St. James’s Park. The brambles had torn his clothes.

The blood was from what had come after.

“Look at him panting,” said one of the men, scorn thick in his voice. “Tongue out like a dog.”

The best that could be said about this man at present was that he stood partly between Reggie and the glare of the sun, which was dipping slowly through the afternoon sky, cradled in a tree-fork of blue space like a burning rock pulled back in a slingshot. Hovering. Waiting. At any moment it could be released and come flying towards them, and they’d all be brightly obliterated.

Reggie coughed, trying to banish the nonsense simmering in his mind. His ribs spasmed with renewed pain.

“Now, now,” said the other man. “Let’s at least be civil.” This voice was not scornful. It was as calm and uncaring as the sky itself, and the last shreds of courage in Reggie shrivelled up to hear it.

The calm-voiced George was facing out into the park, presenting Reggie with a view of the silken back of his waistcoat and the white of his shirtsleeves: cuffs rolled up fastidiously, but still speckled with blood. He was surveying the open green space at the foot of the slight incline crowned by the oak tree. On this summer Sunday, St. James’s was busy with humanity taking their last gulps of fine weather before autumn closed over their heads. Herds of children shrieked and ran, or fell out of trees, or tossed pebbles at the indignant ducks. Groups of friends picnicked, couples strolled with aimless leisure, ladies bumped parasols as they passed one another on the paths and used the excuse to adjust the fall of their lace sleeves. Men lay dozing with boaters tipped over their faces, or nibbled on grass blades as they reclined on an elbow and turned the pages of a book.

None of these people looked back at George, or at Reggie, or at the other man; and even if they did, their gazes passed on without focus or concern. None of them had so much as glanced over when the screaming had started. Nor when it continued.

Reggie could only just glimpse the pearly whisper of uneven air that signified the curtain-spell.

George turned, stepped closer, and hunkered down, careful with his trousers, brushing a speck of dirt from the polished toe of his shoe. Reggie’s entire body, wax-legs and all, tried to flinch back from George’s smile. His nerves remembered pain and wanted to press the body itself into the rough bark, through it—to dissolve somehow.

But the tree was unyielding, and George was too.

“Reggie, my dear boy.” George sighed. “Shall we try this again? I know you found part of it on your own, and thought you could get away with hiding it from us.”

Reggie stared at him. The sharp, surprised wail of a child who’d likely scraped his knee rose somewhere in the distance.

“What earthly good did you think it would do you?” George asked. “You, of all people?” He stood again—the question clearly rhetorical—and made a curt gesture to his companion, who took his place in front of Reggie.

Get on with it, thought Reggie, squinting at the uncovered ball of the sun. Hurl yourself at us. Now would be ideal.

“You found the thing. You snatched it. Now, tell us what it is,” the man demanded.

“I can’t,” said Reggie, or tried to. His tongue spasmed.

The man brought his hands together. There was no finesse to his technique, but by God he was fast; his fingers flickered through the crude shapes of the cradles and came alive with the white glow of his spell before Reggie could so much as inhale. Then he took hold of Reggie’s hands. His grip was inescapable. His heavy brows drew together and he frowned down at Reggie’s palms as though he were about to read Reggie’s fortune and tell him what his future would be.

Short, thought Reggie hysterically, and then the white crawled over his skin and he screamed again. By the time it ended, one of his fingers stood at an awful angle where it had twitched itself out of the man’s grip.

This time, the bind sensed Reggie’s desperation to comply and answer the question. His tender, throbbing tongue now felt as it had when the spell had been laid in the first place: branded and sizzling. He whined around it, clutching at his face. The sound he made seemed to crawl in the air, and yet it affected the park-idyll not in the slightest. The people around them could have been figures in a painting, blissfully unaware of a small child throwing a tantrum on the gallery’s marble floor, safe on the other side of the frame.

“Damn and blast” was George’s comment, staring down at Reggie’s tongue. The symbol of the bind must have been glowing there. It felt like it. “He didn’t do that to himself. Still, there are limits to a secret-bind. Ways to wriggle around its edges.” He frowned. “What is it, Reggie? Play a game of charades, if you must. Write it, draw it in the dirt. Find a way.”

A scrap of hope rose in Reggie at the idea. When he tried to move his hands, they burned with a flash of reproving heat, then went as stubbornly unresponsive as his legs. No. It wasn’t going to be that easy for any of them.

George’s eyes were narrowed. “Very well. Where is it now?”

“Where did you last see it?”

The pain of the bind gave a wary pulse, and Reggie didn’t dare test his voice. But this time his hands lifted when he told them to, and he waved them frantically.

“Ey,” said the other man. “Now we’re getting someplace.”

“Indeed.” George looked out over the park again. He shifted his gaze north, then kept turning, a slow circle like a man lost and seeking landmarks. When he had rotated fully on the spot, he began to build a spell of his own, with the elegant mastery of a jeweller laying minuscule cogs.

George flung his magic-brimming hands wide and a map appeared in the air in front of Reggie, as though a small tablecloth had been shaken out and hung over a line. Blue lines glowed in the air against a background of nothingness. The thickest line formed the familiar snake of the Thames, and the city spilled out around it.

Reggie jabbed at the approximate location of his office. Nothing palpable met his fingers, but the map changed at once, showing a much smaller portion of London. The river formed the eastern and southern borders, and it stretched out to Kensington in the west and followed the northern border of Hyde Park. It was a lovely spell. Reggie wondered what level of detail he would discover, if he kept jabbing and jabbing.

“Not where we are now, you imbecile.”

This time, Reggie managed to indicate the building itself: ironically, yes, a bare stone’s throw to the east from where they were, though Reggie’s finger fell closer to Whitehall than the St. James’s end.

“Your office?” For the first time George sounded surprised.

Reggie managed to nod before the dormant bind seared up in punishment. He barely noticed when the map flickered into nothing. He kept his tongue thrust out as though he could somehow shove the pain away, and tears ran down his face. The two men were looking across the park in the direction of the building.

Again, the man in the cap moved fast. The second-last thing that Reggie saw was the tide of white, cobwebbing up to cover his entire body. The last thing he saw, as he took his last breath, was the sun glinting off the top of George’s walking stick as George strolled through the curtain of his own spell and down the hill, unhurried, a man with nowhere in particular to be.

The only way to get your child back, is to kidnap another child … you are now part of The Chain – new by Adrian McKinty

Don’t miss Tony Park discussing his new book, Ghosts of the Past, with Pages and Wine in Sandton (17 Sep)

Rémy Ngamije chats about the inspiration for his debut novel, The Eternal Audience of One