Friday Night Book Club: Read an excerpt from Reggie and Me, the story of a young South African who hasn’t learnt the rules, by bestselling author James Hendry
More about the book! 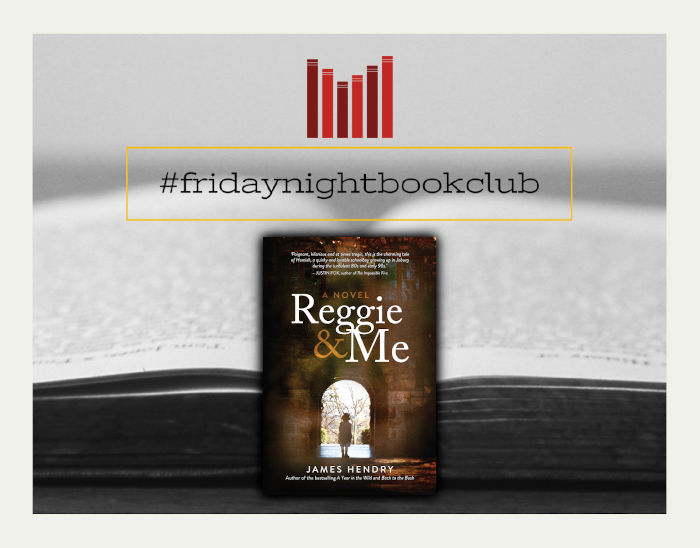 Staying in this evening? Get comfortable with a glass of wine and this extract from Reggie and Me by James Hendry – the bestselling author of A Year in the Wild and Back to the Bush.

‘Poignant, hilarious and at times tragic, this is the charming tale of Hamish, a quirky and lovable schoolboy growing up in Joburg during the turbulent 80s and early 90s.’ – Justin Fox, author of The Impossible Five

South Africa – 1976 to 1994. A time of turbulence as the struggle against apartheid reaches its zenith, pushing South Africa to the brink. But for a one small boy in the leafy northern suburbs of Johannesburg … his beloved housekeeper is serving fish fingers for lunch.

This is the tale of Hamish Charles Sutherland Fraser – chorister, horse rider, schoolboy actor and, in his dreams, 1st XV rugby star and young ladies’ delight. A boy who loves climbing trees in the spring and a girl named Reggie.

Hamish looked up, but was blinded by the suspended lights. Loud scuffling emanated from behind the glare. Feet and hands grasped and slipped on ladders. By the time the headmaster had made it onto the stage, all was quiet.

Mr McAdams lost his patience. ‘From now on, all of you – boys and girls – will sit in the audience for the duration of rehearsals. You will only move between the stage and where I can see you!’

One by one the cast filed out sullenly from behind the wings and sat down on the beaten-up chairs in the hall. A few of them were whispering excitedly.

‘Please continue, Mr Danhauser,’ Mr McAdams instructed the Music director, who was standing with furrowed brow and poised baton. The orchestra took up their instruments and began afresh. With Herculean effort, Hamish re-enacted his love for Natalie.

The next day, the Frasers arrived at school at the normal time and Hamish made his way to the Memorial Quadrangle. As was his normal routine, he placed his bag as close to the choir gallery as possible so as to retrieve it quickly after assembly, after which he would peruse the notice boards. During the rugby season, this served the purpose of revealing the coming Saturday’s team sheets; out of rugby season, it was simply something to do rather than find someone to talk to. Over the course of four-and-a-bit years, Hamish had perfected the art of looking busy so as not to appear friendless.

That day, he arrived with five minutes to spare before the bell. A knot of Matric and Form IV boys in the Iolanthe cast, clearly in something of a flutter, was gathered in the corner of the quad. Hamish had gained some status among these boys because of his lead role so he wandered over to see what the fuss was about. In the middle of the ten or so boys sat Andrew Marsdorf, speaking in conspiratorial tones.

‘… then I climbed up that ladder – I was gonna have a quick smoke on the platform while Fraser and that ogre chick did their thing.’ He looked up to see Hamish observing from behind the group. ‘And I could hear there was someone up there already.’ He paused and lowered his voice as a breeze blew through the cloisters and sent a few leaves into a flurry. ‘Two people actually – a guy and a chick. And they were obviously not doing their Maths homework.’

There were a few giggles.

‘So I kept climbing really quietly – knowing I was going to bust some oke giving it to some slut.’

The boys leant in unconsciously.

‘And I wasn’t wrong. I stuck my head over the ladder. “Busted!” I said and flicked the light switch.’ He whistled and shook his head. ‘You okes won’t fucken believe who it was!’

‘Who?’ demanded an impatient Form IV.

‘It was Angelica Constable,’ Marsdorf said.

A ripple of appreciation and envy ran through the group. All of them longed to be caught in flagrante delicto with Angelica Constable – grabbing her would make a boy an instant legend.

‘And you know who she was with?’

The boys all held their breaths in anticipation, wondering if they were perhaps standing next to the soon-to-be-crowned legend. Marsdorf shook his head.

Incredulity echoed through the knot. Suitably convinced that his story had shocked, Marsdorf continued.

‘What a slut,’ said Neil Long to nods of agreement, the sentiment in the group now edged with malice.

It would be too strong to suggest that Hamish had forged a friendship with Gumede over the years. He had tried, in his way, but was fairly convinced that Gumede, like most of the boys in his class, didn’t care much for him. Regardless, Hamish admired Gumede for his obvious intelligence, talent and inability to give two shits for convention or authority (for his part, Hamish was somewhat cowed by authority). Gumede lived entirely by his own moral compass. He manned up to his indiscretions and accepted that if he chose to rock the boat, he would have to accept the waves.

One day, late in their Form IV year, the six boys of Miss Mkhize’s Zulu class had been waiting for their teacher after break and had gathered in the sun next to a window that opened onto the gardens of the McCarthy Quadrangle. As three Sixth Form girls had walked over the lawn on their way to the Science laboratories, Gumede had wolf-whistled. ‘Hello, sweet babes. Come over here and observe this fine piece of black magnificence!’ He’d raised his arms to show his large, finely chiselled biceps.

Hitherto hidden by an exuberant green bush, Mr McAdams had exploded across the quad as fast as his ageing legs would carry him, appearing suddenly in front of the windows. The girls had made to move off.

‘Please remain where you are, laaydees. This sort of unchivalrous behaviour will not be tolerated at Trinity College.’ He’d glared through the window, his beaky nose, white hair and pale skin resembling a snowy crow. ‘Which one of you reprobates whistled at those laaydees?’

For some reason he stared at Hamish, who had blanched.

Gumede stepped forward. ‘It was me, sir.’

‘Goomeedee! I might have known it was you. You are a constant disappointment.’ The headmaster shook his head sadly – he’d rather hoped it was someone he liked less. ‘Who do you think you are, whistling at those laaydees? Hey? They are human beings – not pieces of meat at a butcher’s shop! This College prides itself on producing gentlemen who protect women – not scoundrels who leave here ready to defile anything that catches their lascivious eyes!’

It must be understood that Robert Gumede had stood in front of angry teachers all his school career – but the headmaster’s passion made him back off from the open window.

‘I can’t even speak to such a despicable creature right now. You will come and see me in my office after school!’ Mr McAdams stalked off to where the girls were standing. ‘I’m so sorry for this shocking act of ungentlemanly behaviour – you can rest assured that I will deal with it swiftly and that Trinity College is a place where laaydees can feel protected and cared for.’

Sometime during the altercation, Miss Mkhize had arrived.

‘Sit down,’ she said sternly from the door.

As the class did so, Miss Mkhize walked round to the front of her desk, leant back on it and folded her arms. She looked at her pupils silently for some time, anger bubbling.

‘Let me tell all of you boys something. Because that is what you are – boys.’ She stood up and tapped her sternum. ‘I don’t need any man to protect me or make a safe space for me – I am not vulnerable, nor do I need or want any “gentleman” to look after me!’

Hamish realised with growing incredulity that this rant was directed at her boss – whose speech on chivalry he’d thought thoroughly rousing – and not at Robert Gumede.

‘Do you all understand me?’ She looked from one boy to the other. Hamish nodded, despite his confusion.

‘Yoh!’ Gumede said from the desk closest to her. He raised his eyebrows. ‘Ma’am don’t like no old white McAdams!’

Miss Mkhize’s right arm shot out like striking mamba, her open palm collecting Gumede over his left ear. The class gasped at the meaty thwack. Gumede sat stunned for a few moments and then coughed once, not daring to move. Miss Mkhize turned to the board and picked up a piece of chalk.

‘We are doing palatalisation today – make some notes.’

Every time Hamish had spent time at hard labour for various minor infractions of the school code, Robert Gumede had been there. Together, they had sanded desks, cleaned bilges and dug trenches. They had chatted about rugby, school, music and women. The black boy had shared bits of his life growing up in a relatively salubrious neighbourhood of Soweto. His father’s name was often in the news – a senior negotiator in the talks that would eventually result in the South African constitution. Gumede had also shared his views on South Africa, authority, Trinity and social conventions. In many ways his attitudes resembled those of David Swart, although they were far less tempered.

So when Hamish Fraser, a senior (if somewhat unremarkable) Trinity pupil heard the story of Angelica Constable and Robert Gumede as told by Andrew Marsdorf, he felt a hot anger.

‘Why is Angelica a slut?’ His voice cut through the group and they swung round to look at him.

‘What?’ the great raconteur looked at Hamish and then shot a glance at Neil Long.

‘What makes Angelica Constable a slut?’ Hamish’s mouth was turned down at the corners, quivering slightly.

‘She was what?’ Hamish was beginning to shake.

‘She was sitting on Goomeedee, and he had his hand in her shirt,’ snapped Marsdorf, irritated that his great revelation should be thus sullied.

‘You’ve both done that. Is your girlfriend a slut?’ Hamish glared at Long, whose girlfriend was Marsdorf’s cousin.’

‘That’s not what I meant!’ Long snapped.

‘Well, what the fuck did you mean?’ exploded Hamish.

Silence. Some of the boys nodded and others looked at their shoes.

Some walked quietly away.

‘That’s what I thought you meant, you prick.’

‘Don’t talk to us like that – everyone knows you’re a kaffir-boetie.’

Marsdorf loomed over Hamish, and shoved the smaller boy in the chest. Hamish, incensed, took a swing – a right cross aimed at Marsdorf’s nose. It takes experience to land an effective punch to the nose of a much larger foe. Hamish Fraser was not experienced – in fact, this was the first punch he’d ever thrown – and it didn’t come close.