Friday Night Book Club: Read an excerpt from Khaya Dlanga’s new book, These Things Really Do Happen to Me
More about the book! 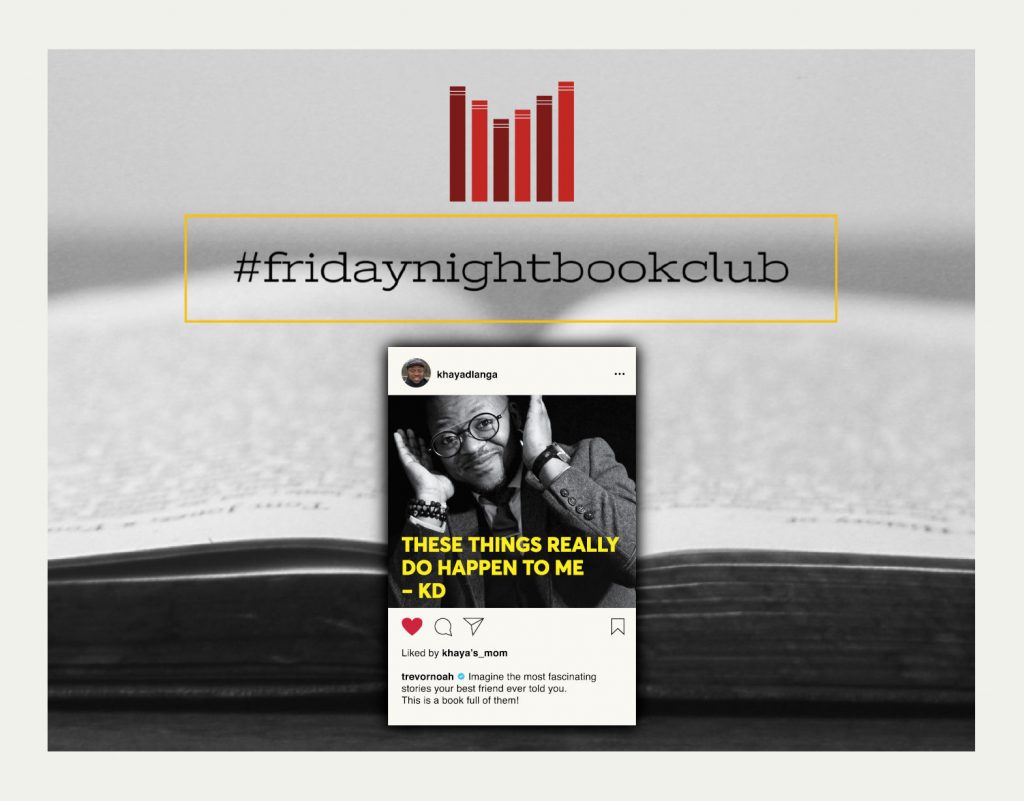 Staying in this evening? Settle in with a glass of wine and this extended excerpt from These Things Really Do Happen to Me, the new book by Khaya Dlanga.

What happens when you parallel park in Parkhurst? How about falling asleep next to President Thabo Mbeki or those awkward encounters with exes?

Well, these things do happen to Khaya Dlanga!

He shares these stories and more in his new book, These Things Really Do Happen to Me.

The book’s cover is inspired by Dlanga’s lively Instagram presence, with a ‘like’ from his mom and a cover shout, in the form of a comment, from Trevor Noah, who says:

‘Imagine the most fascinating stories your best friend ever told you. This is a book full of them!’

Dlanga has established himself as one of the most influential individuals in South African media, particularly social media, a platform he uses to promote discussion on topics that range from the frivolous to the profound. He is the author of In My Arrogant Opinion, published in 2012 as part of Picador Africa’s The Youngsters series, and To Quote Myself, published in 2015.

My matric dance and gwababa 2.0

At my matric dance, my outfit was not the only tragedy. (I wore what one could call a green-cum-beige jacket with a white polo neck. Over it, I had two chains – not the rapper type, obviously, but two necklaces.) Here is how the real tragedy unfolded.

Some years before, I had started taking the train to and from school without my mother knowing. My mother gave me taxi fare every morning but I figured out that if going to school cost R10 per day on the taxi, the train cost me R10 for the whole week. I had R40 in my pocket every week, so the long walk from and to the train was worth it.

After school, before taking the train back from Vincent train station in East London, I would usually go to the CNA at Vincent Park Shopping Centre, a local mall, to read Superman, Spider-Man, Jughead, Archie, Richie Rich, Time magazine, Scientific American, Popular Mechanics and various other geeky material that ensured I would continue not knowing how to talk to girls. I could never afford to buy any of the magazines so I just read them in the store. Otherwise, I would go to Vincent Library, where I read some more on the planets, cosmos, and art history, as well as novels.

But this day was one of those rare days when I did not go geek out. On this day, I decided to take the train back from school earlier than usual. I had to wear my red Hudson Park High School blazer in the sweltering sun since we were not allowed to take off our blazers under any circumstances. I got on the train and noticed that it was not as packed as the later trains. This was great because it meant I could sit down. I then saw the most beautiful girl, sitting with a friend. She was wearing a light-blue skirt and a white shirt. She too was coming from school – Green Point High.

My immediate crush was as jolting as an alarm waking you up in the middle of a deep slumber. Train Crush looked my way and gave me a slight smile. I turned away quickly. Surely she was not smiling at me. I did not want to be presumptuous. This was my standard response back then. I think it still is now. Anyway. At some point, she walked past me and I felt my heart ripping my ribcage. I worried she could hear it because she looked at me again and smiled, then carried on past me. Each time the train stopped at a station in Mdantsane, I hoped she wouldn’t get off, that she would hop off at the same stop as me. The train eventually ground to a halt at my stop, Fort Jackson. I saw her grab her bags and I could not believe it. I was excited and terrified all at once. I knew myself: I would be glad to see her every day but there was no chance in hell I would dare talk to her. Seeing her more regularly, if I took this earlier train more often, would be both a pleasure and self-imposed torture.

Let me share an example of my terror. One time on the train, my friends threatened to tell another girl I had liked for some time that I liked her if I didn’t go up to her. They gave me five minutes. When the time was almost up, I went to her and said, ‘Listen, my friends over there want to see if I can talk you. Just pretend we are having a great conversation and I will be out of your hair soon.’ She laughed so much that we actually ended up having a conversation. She was laughing until she had to disembark. They were shocked; so was I. How I came up with that line I have no idea but I needed to get myself out of a potentially awkward situation. We became really good friends with that girl. But I digress.

Out of nowhere, she walked to me and said, ‘Is your name Bhuti kaKhayalethu?’

She knew my name. Even if she got it wrong. I stared at her longer than necessary – both out of pure shock that she just talked to me and at how beautiful I thought she was. Her voice sounded like a song I wanted to hear often and I loved how she said ‘Khayalethu’. I don’t know if I liked how she said it or just the fact that she was saying my name. Strangely enough, we hit it off and started chatting effortlessly. Her name was Yolanda.

After that, we were inseparable. We walked from the train station together almost every day. Soon, we were waiting for each other after school so that we could walk together. Five months on, we were virtually a couple in other people’s eyes. I was in a full-blown imaginary romantic relationship with her but the closest I had ever got was maybe touching her hand by accident. The matric dance was approaching. I was worried that she would say no if I asked her to go with me, and I don’t think I would have handled the rejection well. Mahle Kwababa, who had been my best friend from the first day of high school, was also struggling to find a matric dance date. The girl he had hoped would go with him had declined, and I promised to ask someone for him. That someone was Yolanda, my Train Crush. I badly wanted to ask her to be my date but, no, the coward in me could not.

When I asked her if she would be Mahle’s date, she agreed. I don’t know if a part of me was hoping she would say no – that she wanted to go with me – or if I’d just wanted her to be there, even if she wasn’t going to be with me. The girl I had asked to be my date decided at the last minute that she couldn’t make it as she did not have a dress. God was punishing me for my stupidity. My family got my cousin, Nobulali Mshumi, who is seven years older than me, to be my date. I wondered if people could tell that I was with my cousin, if they would notice that she was older, and if they would laugh and make fun of me.

Fortunately, no one could tell. Nobulali has always looked young for her age, and she is really beautiful, so it seemed like I had scored. At the dance, Yolanda avoided my friend. He told me he saw her kiss another guy. Years later, she told me she’d been disappointed that I never asked her myself because, ‘I had an even bigger crush on you.’

I didn’t ask her because I couldn’t bear the thought of her saying no. Sometimes we trust what we are afraid of more than what we want. Gwababa.

Of Blood and Bone, the new book by Nora Roberts – an epic story of love, war, family and magic