Friday Night Book Club: ‘I’m supposed to have sex with a rabbit? Isn’t that bestiality?’ Read an excerpt from Angela Makholwa’s new novel Critical But, Stable
More about the book! 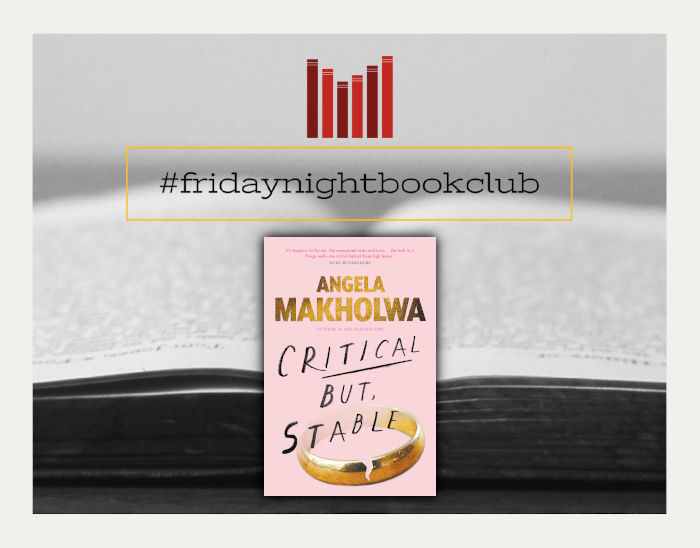 Get comfortable this evening with a glass of wine and an excerpt from Critical But, Stable – the highly anticipated new book from Angela Makholwa!

No one ever tells you the cost of a perfect life …

The Msibis, the Manamelas and the Jiyas are high-flying married couples who belong to the Khula Society, a social club with investment and glitzy benefits.

The wives are smart, successful in their chosen careers and they lead lifestyles to match – jostling for pole position in the ‘Keeping up with the Khumalos’ stakes. The husbands have had their successes and failures, sometimes keeping dubious company and getting to the top of their fields by whatever means necessary.

Beneath the veneer of marital bliss, however, lie many secrets. What will happen to their relationships when a devastating event affects all their lives?

Lerato showered, then dressed in jeans, a T-shirt and sneakers. The estate on which Moshidi and Solomzi had lived for more than five years was a quick drive from her house. By the time she stepped into her car her sister had already sent her a gate code to access entrance. Driving in to the immaculately preserved estate, Lerato sometimes still could not believe how wealthy her younger sister and her husband were. Three homes in some of the most exclusive addresses in South Africa … and yet she and Solomzi were both still fairly young. As much as she often worried about their opulence, the couple seemed comfortable and confident in their financial status. And Zimbali was Moshidi’s pride and joy. When she finally got to the house, she found Moshidi waving off a Bentley – Zozo’s playdate, she presumed. She went and hugged her sister.

‘I remember when parents used to pick up my boys in Toyota Tazzes to take them on playdates. You guys roll around in Bentleys now?’ she said.

Moshidi laughed her off. ‘That’s little Lindiwe’s mom. She’s the CEO of some financial services company. I just admire her for still managing to arrange playdates while running a blue-chip company.’ Lerato shrugged.

‘Yup. I guess there’s definitely something to be said for that,’ she said.

‘Come out to the patio. I’ve fixed us some platters.’

Lerato followed her sister into the spacious lounge area and proceeded through the sliding glass doors that led to the patio. Moshidi had set out savoury and sweet platters, a jug of juice for Lerato and a bottle of champagne in an ice bucket for herself.

‘Wooowee! Shidi. Are you going to finish that whole bottle by yourself? Le a tagwa, man!’

‘Hayisuka! You teetotallers are so boring. Leave my champagne alone.’

‘He’s upstairs. He’ll be down in a few. He was on the golf course all morning. Now he’s joining some friends for lunch.’

‘So, when last did you speak to Papa?’ asked Moshidi.

‘Two days ago, actually. His left leg is acting up again. But Mma said she took him to the doctor last week and he’s been given some pain killers to manage it.’

‘Oh. Poor Dad. That leg’s been bugging him since that accident when he was visiting at Tlhabane.’

Lerato murmured in agreement. Solomzi came down the stairs and out to the patio to greet the two sisters.

Lerato stood up to hug him. ‘MoXhosa! O ya kae looking so fine and all? Hmmm?’

Solomzi laughed happily. ‘Hayi mani wena. I need to go out with the boys. Discuss business You know mos.’

‘Don’t worry. I promised my wife here I’ll be back in good time,’ he said, pecking Moshidi on the cheek.

‘Hmph! Why are you acting all cold and distant towards sbali sa ka? Everything okay?’

Moshidi just rolled her eyes. ‘Things are critical but, stable … as usual,’ she said, sipping her champagne. ‘Have some juice.’

Lerato pondered her sister’s words. ‘Hmm. You know how we laughed when you first used that term to describe the state of your marriage?’

Moshidi did not want to think of that period in her life so she chose to sip her champagne like it was the ultimate gift of life. Soli’s affair with the girl who didn’t know how to use spell-check had dented her self-esteem.

‘But I think it’s the general state of most long marriages. You know?’ offered Lerato.

‘I actually don’t know. Look at Noma and that dodgy Duke character of hers. They always look like they’ve just had sex, yet they’ve been married since the Mfecane war. Nothing “critical but, stable” there. All the vital signs are in perfect range with those people.’ Lerato shrugged, poured herself a glass of orange juice and gazed at her sister.

‘Speaking of sex … sis … tell me something …’ She cleared her throat. ‘How are things between you and sbali? I mean, in the bedroom?’

‘Ha! Lerato Msibi! Are you asking me about my sex life? I have never heard you broach the sex subject – ever! What’s this about … hey?’ asked Moshidi with genuine curiosity.

‘Eish,’ Lerato sighed, fidgeting with one of Moshidi’s unnecessary napkins. ‘Frankly, Moshidi, I ain’t getting any. Not for a long, long, long while.’

‘Long like how? A month? Three months? A year?’

‘A whole year? Shoo! What’s happening? Is it you or him?’

‘Just asking. So … what exactly is the problem?’

‘Do you think he’s seeing someone else?’

‘The thought did occur to me, but you know. It’s Mzwandile. I just can’t see him cheating. It just seems so far-fetched.’

‘Every single man on this earth is capable of cheating, sis. Just take those rose-tinted glasses off your pretty little nose. Have you noticed any changes in his behaviour? New cologne? Press-ups? Viagra? Is he taking extra care with his body, more vain pursuits all of a sudden? Working late at the office? Anything like that?’

Lerato entertained the saner of Moshidi’s questions then shook her head. ‘Nah. It’s nothing crazy like any of the stuff you mention. If anything, he’s even more available physically. Not sexually but just his physical being. He’s more homebound. More present, but I just can’t access him sexually.’

Moshidi sipped some more of her champagne.

‘Well. This gets curiouser and curiouser.’ After a while, she ventured another possibility. ‘Do you think he’s gay? It could be the case, you know? I mean … I always found it weird that he was so patient when you guys were still dating. He wasn’t pressuring you at all during that whole no-sex-before-marriage thing.’

Lerato looked at her incredulously. ‘Are you insane? Of course, he had to be patient. Zwai and I are practising Christians. We’ve always been that way. Don’t turn something that’s beautiful and pure into something nasty, Moshidi. I seriously need your help here.’

‘No, I’m serious, Lerato. Most guys wouldn’t have waited five years before banging.’

‘Okay. Okay. What do you want me to help you with?’

‘I want advice on how to deal with this. He somehow finds ways to avoid the topic. I’ve tried everything. Sexy lingerie. I’ve set the mood a thousand times … nothing seems to work. It’s like his sex switch is off for good.’

‘Oh, my word! I wouldn’t be able to cope with that. What about counselling? Maybe there’s some deep psychological issues he’s dealing with.’

Lerato looked at her sister and fiddled with the cheese sticks on the platter. She frowned. ‘I’ve suggested all of that before. How do I survive in the meantime?’

‘I know!’ said Moshidi, clapping her hands with glee. ‘The rabbit!’

‘The rabbit, dear sis. Don’t you know? That’s the only way to get sexual satisfaction if your man’s not delivering the service.’

Lerato’s eyes were popping out of their sockets. ‘I’m supposed to have sex with a rabbit? Isn’t that bestiality?’

Lerato looked sceptical. ‘I’m not sure if a sex toy would do the job for me. I need passion, that masculine touch. I want to feel loved. I just need my man to be a man.’

Moshidi shrugged. She went upstairs and came back with something in a pink satin package.

‘We can’t have sex with the same rabbit!’

Lerato took the beautifully wrapped package and slowly opened it. It was smaller than she expected, compact, with a diamond stud and … ‘Why is it so small?’

‘Oh, ye of little faith. That thing is proof that size doesn’t matter. It’s about technique. Get some AAA batteries, get into a warm bath and have fun. You’ll thank me later, believe me.’