Find out more about the agile and artful caracal in an excerpt from David Muirhead’s Cat Among the Pigeons
More about the book! 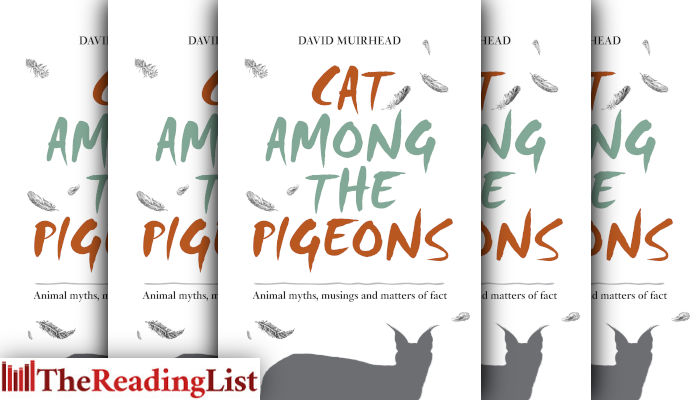 Cat Among the Pigeons, the new book from David Muirhead, is out now from Penguin Random House!

Cat Among the Pigeons is another collection of Muirhead’s unrespectable creatures, following his successful book of hilarious animal stories, The Bedside Ark.

Muirhead’s mix of humour, mythology, anecdotal tales and folklore builds quirky and captivating portraits of each animal, and makes for a lighthearted, funny – as well as illuminating – read.

A caracal recently caught on camera killing 20 African penguins near Cape Town was probably hoping the blame would be pinned on a lynx. The two look alike, at least at a glance, in dim light, with clouds across the moon. Local law enforcement could be faced with a genuine conundrum if not for the fact that the nearest lynx lives in Spain.

Despite their similarity in size, and the natty tufts of hair on their ears, the two cats are only distantly related. The caracal has been around a long time, eight million years or more, while the lynx is a much newer evolutionary addition to the feline family. The caracal’s closest cousin isn’t the lynx, but rather the African Golden Cat, which will no doubt also claim that it was nowhere near the penguin colony at the time.

Nevertheless, as far as nomenclature is concerned, confusion reigns and has for as long as anyone can’t remember. Caracals owe their name to the kind of sloppy pronunciation that happens when cultures collide and coalesce. The Turks called the cat kara kulak, which means ‘black ear’, and the word bumbled into English as ‘caracal’. Prior to that, in the Middle Ages, everyone thought they were lynxes, because that’s what the Romans and the brainy Ancient Greeks had called them; in fact, any cat bigger than the humble domestic pussy, and smaller than a lion or a leopard, was often called a lynx.

Reluctant to let go of a punchy name, many folk in South Africa still call the caracal a lynx, while a select few elevate the cats to a higher, double-barrelled social stratum, and call it a caracal-lynx. The Afrikaners, refusing to get embroiled in the controversy, call it a rooikat.

Caracals are endemic to Africa, the Middle East, India and Southeast Asia, but they’re faring a lot better in some places than others, largely depending upon the pressures exerted by burgeoning human populations. In India they’re endangered, while in Africa they’re particularly widespread, ranging from the slopes of Table Mountain to the Nile valley in Egypt.

They’re usually associated with relatively dry habitats, woodlands and savannas, but happily slot into a variety of ecosystems, from forest to semi-desert. The mountainous region of South Africa’s Eastern Cape province purportedly has one of the highest population densities. Over in the west, in and around the leafy suburbs bordering the nature reserves that make up the Table Mountain National Park, the cats are experimenting with semi-urban living, so much so that they’ve started to feature in road accident statistics. Caracals killed while crossing suburban roads are mostly young males, which are much more peripatetic than females.

Despite the automotive dangers, peripheral city life has its advantages. Rodents discovered ages ago that there’s an excellent living to be had around human beings, particularly urbanites; they’re such messy and wasteful eaters. It’s therefore unsurprising that abundant rats and mice, a favourite prey species, feature prominently in the diet of Cape metro caracals. Also available, as an occasional delicacy, are domestic cats – at least those brave or daft enough to tiptoe beyond the manicured lawns and well-trimmed hedges of suburbia into the edges of neighbouring wild lands.

Caracals can lay claim to the dubious distinction of being the original cat among the pigeons. In days gone by, potentates in Persia and India used tame caracals to hunt game, typically small mammals and birds. As an entertaining sideline, they enjoyed releasing one of the springy cats into a large room full of pigeons, placing bets on how many it could pluck from the air in a set time. The record, according to anecdotal evidence, was 12.

Propelled by powerful hindquarters, caracals are capable of truly extraordinary leaps, 3 metres straight up from a squatting start. Despite applying max flaps and full thrust, a guinea fowl flushed from the grass has little chance of escaping. But adept as they are at jumping, an aerial intercept is not the caracal’s standard hunting method. Like others of their kind, they’re ambush predators, making use of cover until they’re close enough to charge or pounce.

Caracals aren’t too fussed about what’s on the menu, provided it’s made of meat. Unlike jackals, they’re strictly carnivorous, and definitely not available to share a bowl of berries. Insects and lizards are fine as canapés, but their main day-to-day fare consists of rodents, small mammals, typically dassies and duiker-sized antelopes, and birds as big as bustards. There are recorded instances of hefty caracals successfully bringing down ostrich and even adult antelope.

Jackals, which often share the same turf, are a pain in the furry butt as far as caracals are concerned. The two species indulge in tit-for-tat baby snatching (and crunching and munching) so it’s little wonder that they loath each other. As with lions, which seem to deliberately seek out and destroy cheetah cubs in the Serengeti, this behaviour may have as much to do with eliminating competition as seeking sustenance.

Whatever caracals choose to hunt, they hunt alone. With the exception of mothers raising kittens, they lead a solitary life, and mainly inhabit the night. There is some evidence that this nocturnal lifestyle is driven by self preservation rather than choice; in areas of scant or non-existent human populations, notably remote parts of Turkey and Arabia, they are just as likely to be out and about during the day. But hunting at night does have its advantages: there’s a better than even chance that a prospective meal has nodded off. A caracal can shoot up a tree in the blink of a bleary eye to grab a small monkey or a roosting bird.

Not that such lethal efficiency impresses everyone. As the occasional perpetrators of excessive and bloody mass slaughters, caracals are regarded by some folk, notably chicken and sheep farmers, as the devil incarnate. While African penguins might be persuaded to testify, albeit reluctantly, that such abhorrent behaviour is rare, when it does occur, caracals, like leopards, are judged in human terms. All too often, this leads to a highly poisonous and grossly indiscriminate human response.