Find out more about Mad Honey – the heart-pounding and heartbreaking novel by bestselling authors Jodi Picoult and Jennifer Finney Boylan
More about the book! 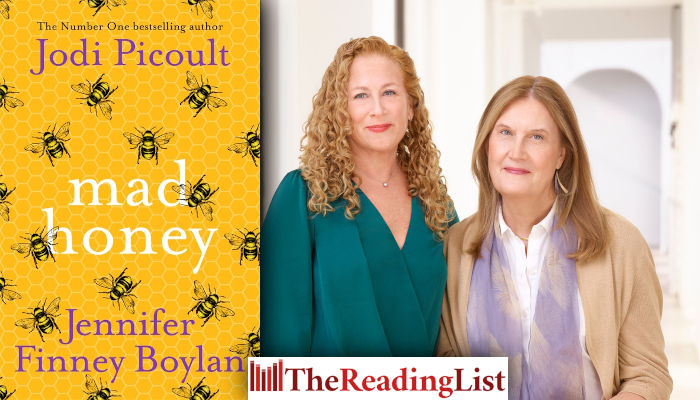 Mad Honey – from bestselling authors Jodi Picoult and Jennifer Finney Boylan comes a moving and powerful exploration of the secrets we keep and the risks we take in order to become ourselves.

The most compelling, challenging and contemporary novel you will read this year – and which will start conversations we need to have around authenticity, identity, and gender.

‘Mad Honey has all of the things: alternating narratives, suspense, courtroom drama, and a love story at its core. It’s about authenticity, identity, and it explores the secrets we keep and the risks we take in order to become our true selves.’ – Jodi Picoult

Olivia fled her abusive marriage to return to her hometown and take over the family beekeeping business when her son Asher was six. Now, impossibly, her baby is six feet tall and in his last year of high school, a kind, good-looking, popular ice hockey star with a tiny sprite of a new girlfriend.

Lily also knows what it feels like to start over – when she and her mother relocated to New Hampshire it was all about a fresh start. She and Asher couldn’t help falling for each other, and Lily feels happy for the first time. But can she trust him completely?

Then Olivia gets a phone call – Lily is dead, and Asher is arrested on a charge of murder.

As the case against him unfolds, she realises he has hidden more than he’s shared with her. And Olivia knows first-hand that the secrets we keep reflect the past we want to leave behind – and that we rarely know the people we love well as we think we do.

‘Compelling … A well-paced story that highlights several timely issues, with a stimulating courtroom trial that makes it worth reading.’ – Kirkus Reviews

Jodi Picoult is the author of 25 novels, including My Sister’s Keeper, Nineteen Minutes and Small Great Things, with 40 million copies sold worldwide. Her last 12 books have debuted at #1 on the New York Times bestseller list, including her most recent, Wish You Were Here. Five novels have been made into movies and Between the Lines (co-written with daughter Samantha van Leer) has been adapted as a musical and premiered in New York in June 2022. She is the recipient of multiple awards, including the New England Bookseller Award for Fiction, the Alex Award from the YA Library Services Association, and the NH Literary Award for Outstanding Literary Merit. She is also the co-librettist for the musical Breathe, and the upcoming musical The Book Thief, which will open in the UK in September 2022. She lives in New Hampshire with her husband Tim. They have three grown up children.

Jennifer Finney Boylan is the author of numerous works of fiction and non-fiction, including the seminal She’s Not There: A Life in Two Genders (2003), which was the first bestselling work by a transgender American. She is a trans activist and a professor at Barnard College. She serves on the Board of Trustees of PEN America, the non-profit advocating for authors, readers, and freedom of expression. From 2011 to 2018 she served on the Board of Directors of GLAAD. She has also been a member of the Board of Trustees of the Kinsey Institute for Research on Sex, Gender, and Reproduction. For many years she was a Contributing Opinion Writer for the opinion page of the New York Times, and she has appeared on the Oprah Winfrey Show, the Today Show, and been the subject of documentaries on CBS News’ 48 Hours and The History Channel. She lives in New York City with her wife, Deedie. They have a son, Sean, and a daughter, Zai.

Jodi Picoult and Jennifer Finney Boylan collaborated on Mad Honey during lockdown after Jenny tweeted about a dream she had in which she and Jodi co-wrote a novel. They wrote alternate chapters, editing each other’s work as they went along.