Umuzi has released a series of new editions of four of Damon Galgut’s novels.

Small Circle of Beings (1988), Galgut’s second book, is a collection of short stories based on his battle with cancer. His third book, The Beautiful Screaming of Pigs (1991), won the prestigious CNA Prize.

His next novel, The Quarry (1995), was made into a feature film, and won Best Film at the 1998 Montreal Film Festival.

Arctic Summer (2014), his most recent novel, was shortlisted for the Walter Scott Prize and won the Sunday Times Barry Ronge Fiction Prize.

Find out more about the books: 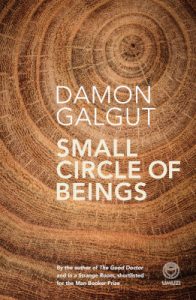 It’s a wild land, this. At the edges of the tamed space a dense wall of jungle rises, woven with leaves so that it seems impenetrable. But this is not the case: there are paths that lead into the forest, if you know where to look.

The family – that small circle of beings where love should flourish – can be an arid and alienating territory where hatred and violence may ignite.

On the surface, Small Circle of Beings, the novella which gives its title to this collection, concerns a family living what would appear to be an idyllic life. When the couple’s only child falls ill, tension and strain begin to take their toll, and the hairline cracks and fissures in his parents’ relationship gradually widen and split open until a marriage that seemed solid and secure falls irretrievably apart.

Galgut’s economy of style and his chilling gift for understatement and the macabre are nowhere more eloquently displayed than in this gripping story. The same sensitive and atmospheric writing can also be seen in the shorter stories – ‘Lovers’, ‘Shadows’, ‘The Clay Ox’ and ‘Rick’. 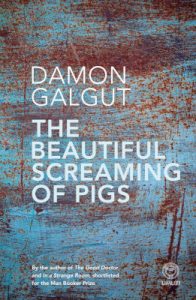 The Beautiful Screaming of Pigs

I was back in a white hospital bed, with a doctor sitting beside me. ‘Try to describe how you feel,’ he said.
‘I feel dislocated,’ I told him. ‘Not part of life.’
‘Whose life?’
‘Mine. Everybody’s. Life.’
And the familiar sensation started up in my belly, the shaking spread into my arms. I covered my face with my hands, but I couldn’t block out what I saw.

A year ago Patrick Winter, a young South African, was sent to Namibia to complete his military service and to defend his country against ‘terrorism’. Now he is back, to meet Godfrey, his mother’s freedom-fighter boyfriend, and to witness the country’s first free elections. But Patrick needs to confront and process much more than a country in transition, and in doing so he is forced to revisit his past and to face the pain and the demons that haunt him. 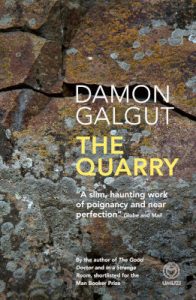 He came out of the grass at the side of the road and stood there without moving. His eyes were blinking in a way that wasn’t normal and he was rocking very gently on his heels. There were raw places on his skin. There were blisters on his feet that had come from walking and blisters in his mouth that had come from nothing, except his silence perhaps, and bristles like glass on his chin.

On a lonely stretch of road a nameless man commits a murder. The victim is a religious minister on his way to take up a post in a nearby town. When the murderer decides to steal the dead man’s identity, his first official duty is to bury the body, which has just been found near a disused quarry. But the head of the local police takes a close interest in the new minister’s work – watching, listening, slowly circling his prey.

In The Quarry, Damon Galgut brings the power of myth to his tender prose to create a devastating drama that builds to a climax that is almost too much to bear. 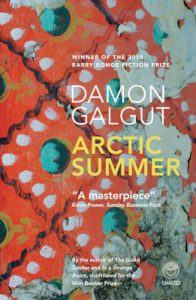 Lust in close confines, under a hot, empty sky, breeding dreams of murder: he sensed the beginnings of a story.

Against the backdrop of a world in flux at the start of a new century, Arctic Summer portrays the life of British writer EM Forster: his inner turmoil, his search for love and the story behind one of the greatest novels in English, A Passage to India.

In 1912, Forster follows his friend Syed Ross Masood to India. It is on this journey – travelling around the country while it is still under British rule – that the seeds of his novel are planted. But it will be another 12 years, and a second time spent in India, before his book is published. Between these two journeys lie the writing of an unpublishable novel, the outbreak of the First World War, and a long stay in Alexandria, where he has an unlikely affair with an Egyptian tram conductor.

As we follow Forster across continents – stuttering, aching, his love mostly unrequited – Galgut captures with colour and exquisite delicacy the England, India and Egypt of the era. Meticulously researched, Arctic Summer conjures the figure of Forster in all his contradictory genius, providing a fascinating glimpse into the creation of a masterpiece.