Don’t miss the virtual book launch of Reggie and Me by James Hendry, with Gail Schimmel! (5 May) 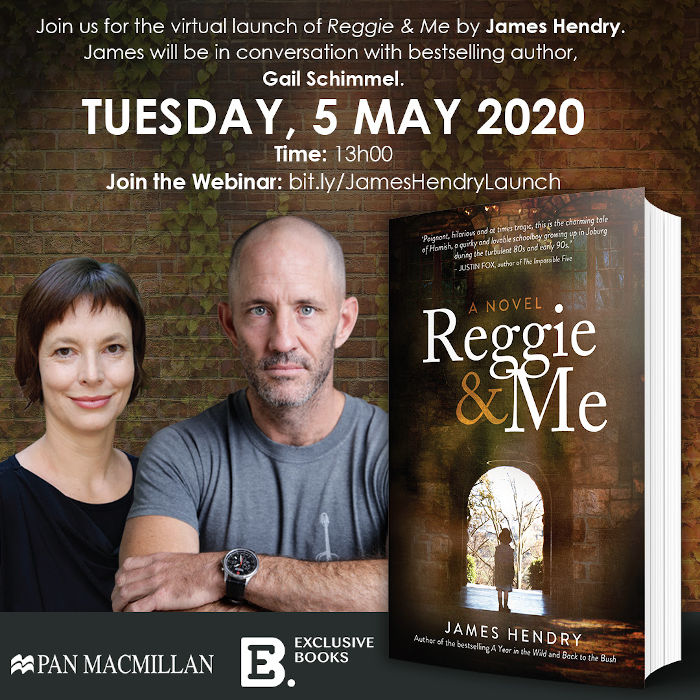 Join James Hendry for the virtual launch of his latest novel Reggie and Me!

Hendry will be in conversation with bestselling author Gail Schimmel.

James Hendry is a wildlife television presenter, who has hosted the prime-time TV series SafariLIVE for NatGeo Wild, the SABC and international internet audiences. He has worked as a guide, ranger, teacher, ecologist, lodge manager, researcher and entertainer. Hendry has a Masters in Development Studies and speaks Zulu and Shangane conversationally. Hendry is the author of three novels: Reggie and Me (2020), Back to the Bush: Another Year in the Wild (2013) and A Year in the Wild: A Riotous Novel (2011).

Gail Schimmel is an admitted attorney and currently works as the CEO of the Advertising Regulatory Board. She lives in Johannesburg with her family. Two Months is her fifth novel, following on from The Accident (2019), The Park (2017), Whatever Happened to the Cowley Twins? (2013) and Marriage Vows (2008).

About Reggie and Me

A time of turbulence as the struggle against apartheid reaches its zenith, pushing South Africa to the brink. But for one small boy in the leafy northern suburbs of Johannesburg … his beloved housekeeper is serving fish fingers for lunch. This is the tale of Hamish Charles Sutherland Fraser – chorister, horse rider, schoolboy actor and, in his dreams, 1st XV rugby star and young ladies’ delight. A boy who loves climbing trees in the spring and a girl named Reggie. An odd child growing up in a conflicted, scary, beautiful society. A young South African who hasn’t learnt the rules.

From the bestselling author of The Park and The Accident comes a new domestic thriller that will keep you turning the pages until the very end. When Erica wakes up to discover that she can’t remember two months of her life, she wants to know what she’s missed. She soon realises that she’s lost more than two months. She’s lost her job and her friends. And her husband won’t tell her why. As Erica starts to put together the clues and pieces, a picture emerges of what has happened. A picture that is fatally flawed.