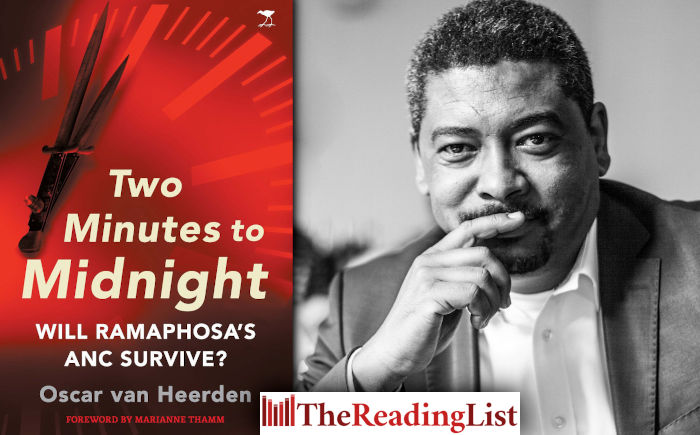 Jacana Media and the Daily Maverick invite you to a Book Launch Webinar for Oscar van Heerden’s book Two Minutes To Midnight: Will Ramaphosa’s ANC Survive?

On 18 December 2017, Cyril Ramaphosa beat out Nkosazana Dlamini Zuma by 179 votes – a margin of only 3%. A narrow victory that illustrates the deep divide that exists within the ruling party and begs the question: Will Ramaphosa’s ANC survive the ANC National General Council in June 2020, or will the fight for our country’s leadership continue?

Van Heerden will be in conversation with Ferial Haffajee.

​​​​​​​Together they will give viewers an insight into the political mechanisms of the ANC and discuss the political moves that Van Heerden witnessed at Nasrec in 2017.

Oscar van Heerden is a scholar of International Relations (IR) and completed his PhD and master’s studies at the University of Cambridge. He has lectured IR at Wits University and was also a postdoctoral fellow at the University of Johannesburg. His work experience over the last 20 years has been in Strategic Support at the ANC headquarters in the late 1990s, the South African Qualifications Authority in 2000 and as an independent management consultant working mostly but not exclusively with various government departments, in particular the Security Cluster. He is a columnist for Daily Maverick and remains an engaged intellectual provocateur and thought leader in South Africa.

Ferial Haffajee is Daily Maverick’s Associate Editor and former editor of the Mail & Guardian newspaper. In 2014, Haffajee was awarded the International Press Freedom Award by the Committee to Protect Journalists and was appointed to the board International Press Institute in 2011.