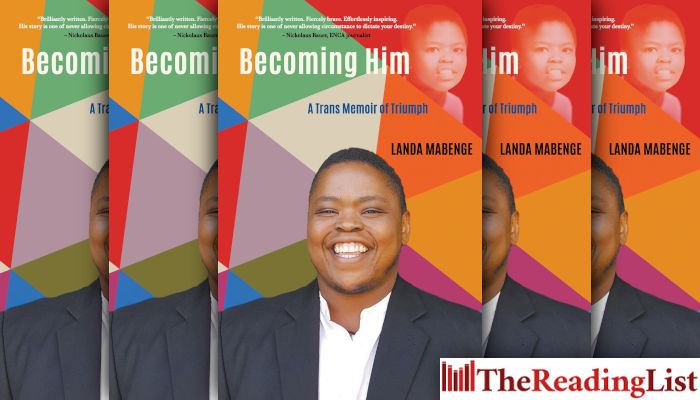 Becoming Him by Landa Mabenge is out in August 2018 from MFBooks Joburg.

In April 1981, Landa Mabenge enters this world, trapped in a girl’s body.

From an early age, Landa is aware that he does not relate to his female form, despite being socialised as a girl.

In this groundbreaking and brutally honest memoir, Landa Mabenge establishes himself as a resounding and inspirational voice for anyone fighting to define themselves on their own terms.

In mesmerising detail, Becoming Him lays bare Landa’s tortured world, growing up trapped in the wrong body, while unflinchingly tracing his transition from female to male.

Landa Mabenge’s childhood in Umtata is brutally shattered at the age of 11, when an angry woman and her zombie-like husband unexpectedly arrive and force him to accompany them to Port Elizabeth. Life in PE with ‘The Parents’ soon morphs into a Dickensian nightmare. Landa is subjected to horrific physical, emotional and psychological abuse as he descends into a world of isolation and shame. He recalls his prison of powerlessness:

At 18 Landa is finally able to escape PE to study at UCT, where he tries to embrace life as a butch lesbian, but he remains tortured by his female body. After a close-to-death break down, Landa finally finds strength to embark on an arduous four-year-long journey to physically and legally become ‘him’, relentlessly researching what it will entail to embark on gender alignment.

In 2014, Landa makes history by becoming the first known transgender man in South Africa to successfully motivate a medical aid to pay for his surgeries through the Groote Schuur Transgender Clinic.

Both heartbreaking and uplifting, Becoming Him is a unique story of torture and triumph, bravely opening the lid on cultural shame and abuse against those who choose a path less travelled.

In 2017 Landa was selected out of over 60 000 African applicants for the Mandela Washington Fellowship for Young African Leaders. Today Landa lives a transformed and happy life as a transgender educationalist and consultant.