Between Starshine and Clay – a series of incisive and intimate encounters between Sarah Ladipo Manyika and the most distinguished Black thinkers of our times
More about the book! 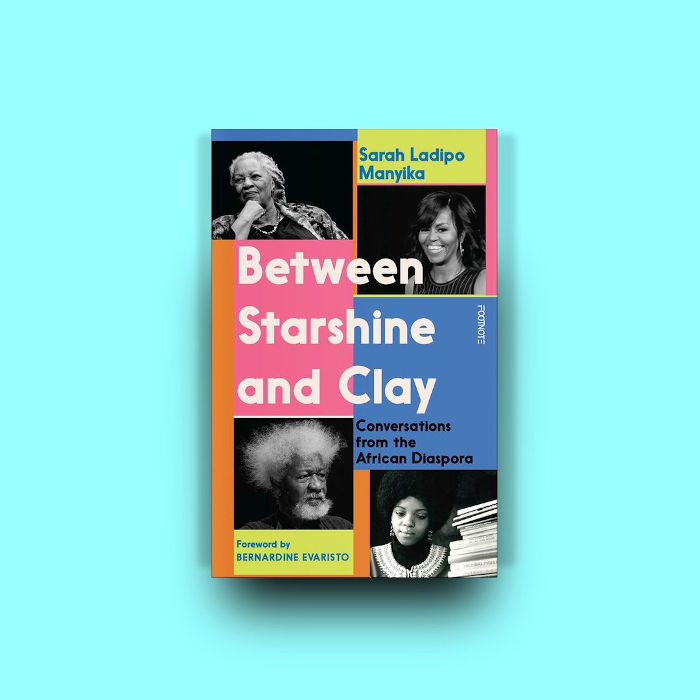 Between Starshine and Clay: Conversations from the African Diaspora by Sarah Ladipo Manyika is out now from Jonathan Ball Publishers.

With a Foreword by Bernardine Evaristo.

In a series of incisive and intimate encounters Sarah Ladipo Manyika introduces some of the most distinguished Black thinkers of our times, including Nobel Laureates Toni Morrison and Wole Soyinka, and civic leaders first lady Michelle Obama and Senator Cory Booker.

She searches for truth with poet Claudia Rankine and historian Henry Louis Gates, Jr. She discusses race and gender with South African filmmaker Xoliswa Sithole and American actor and playwright Anna Deavere Smith. She interrogates the world around us with pioneering publisher Margaret Busby, parliamentarian Lord Michael Hastings and civil rights activist Pastor Evan Mawarire – who dared to take on President Robert Mugabe and has lived to tell the tale. We also meet the living embodiment of the many threads, ideas and histories in this book through the profile of her fabulous 102-year-old friend, Mrs Willard Harris.

In journeys that book-end the collection, Sarah Ladipo Manyika reflects on her own experience of being seen as ‘oyinbo’ in Nigeria, African in England, Arab in France, coloured in Southern Africa and Black in America, while feeling the least Black and most human among her fellow travellers, explorers all, against the sharp white relief of the South Pole.

Sarah Ladipo Manyika is a writer of novels, short stories and essays translated into several languages. She is author of the best-selling novel In Dependence (2009) and multiple shortlisted novel Like A Mule Bringing Ice Cream To The Sun (2016), and has had work published in publications including Granta, The Guardian, the Washington Post and Transfuge among others. Manyika serves as Board Chair for the women’s writing residency, Hedgebrook; she was previously Board Director for the Museum of the African Diaspora, San Francisco; and has been a judge for the Goldsmiths Prize, California Book Awards, Aspen Words Literary Prize, and Chair of judges for the Pan-African Etisalat Prize. Manyika is a fellow of the Royal Society of Arts. Her most recent book is Between Starshine and Clay: Conversations from the African Diaspora.