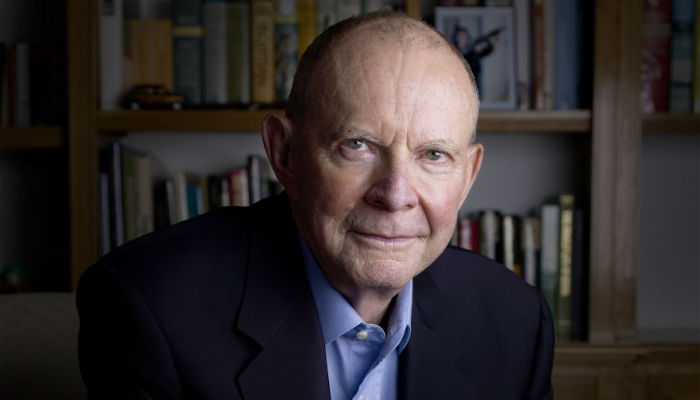 Beloved, global bestselling author Wilbur Smith passed away unexpectedly on Saturday afternoon at his Cape Town home, with his wife Niso by his side.

Wilbur Smith was a global phenomenon: a distinguished author with a large and established readership built up over 55 years of writing with sales of over 130 million novels worldwide.

Born in Central Africa in 1933, Smith became a full-time writer in 1964 following the success of When the Lion Feeds, and published 41 global bestsellers, including the Courtney Series, the Ballantyne Series, the Egyptian Se­ries, the Hector Cross Series and many successful standalone novels, all meticulously researched on his numer­ous expeditions worldwide. His books have been translated into 26 languages.

As Wilbur Smith said at the conclusion of his memoir On Leopard Rock published in 2018: ‘I’ve had tough times, bad marriages, people I loved dearly dying in my arms, burnt the midnight oil getting nowhere, but it has, all in the end, added up to a phenomenally fulfilled and wonderful life. I want to be remembered as somebody who gave pleasure to millions.’ He remained as committed to his readers as they were to him and their dedication and engagement was one of his greatest joys. On his behalf, we thank them all.

The establishment of the Wilbur & Niso Smith Foundation in 2015 cemented Smith’s passion for empowering writers, promoting literacy and advancing adventure writing as a genre. The foundation’s flagship programme is the Wilbur Smith Adventure Writing Prize.

The Daily Maverick’s obituary notes the tributes that have come in for Smith from his publishers and agent:

Eugene Ashton, the CEO of Jonathan Ball Publishers, who published Smith’s latest work in South Africa, said of the writer: “He was a colossus in every way and the world of books will be the poorer for his passing.”

Smith’s literary agent, Kevin Conroy Scott, said: “Wilbur Smith was an icon, larger than life, beloved by his fans who collected his books in hardbacks and passed his work down through generations, fathers to sons and mothers to daughters. His knowledge of Africa, and his imagination knew no limitations. His work ethic and his powerful, elegant writing style made him known to millions.”

Kate Parkin, of Smith’s UK publisher Bonnier Books, said: “Wilbur never lost his appetite for writing and remained working every day of his life. He leaves behind him a treasure-trove of novels, as well as completed and yet to be published co-authored books and outlines for future stories. It has been a privilege and an honour to work closely with him on this remarkable publishing legacy.”

Smith is survived by his wife Mokhinoso, his three children, Shaun, Christian and Lawrence, and his grandchildren.