‘Being bullied is not your fault’ – Shudufhadzo Musida on Shudu Finds her Magic (Plus: Watch the author read an extract!)
More about the book! 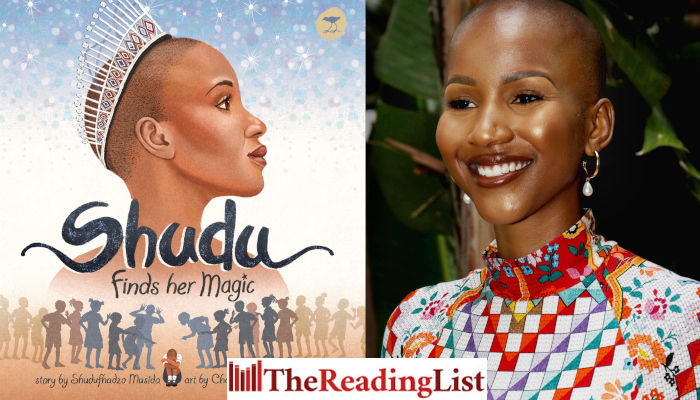 Shudu Finds Her Magic by Shudufhadzo Musida is a brave, beautiful book about a delightful and outgoing little girl growing up in a small village named Ha-Vhangani in Limpopo. But when Shudu’s mother gets a new job and they move to Mpumalanga, her new classmates bully her mercilessly, and she becomes a sad, lonely child.

The Reading List chatted to Shudufhadzo about her courageous, powerful children’s book that explores themes of family, friendship and feeling a little bit different.

Read the interview (and scroll down to watch the video):

How does it feel to hold your own children’s book in your hands?

Magical. I really did find my magic!

You dedicated Shudu Finds her Magic to your grandfather, Takalani Elias Musida, and your grandmother, Mbulaheni Marandela Musida. Tell us about them and the role they played in your upbringing.

I come from a small but proud Venda village called Ha-Vhangani in Limpopo and my grandparents – along with my mother and other family members – played an integral part in my life. I believe I am the true reflection of the saying ‘it takes a village to raise a child’.

Shudu Finds her Magic deals with an important social issue in South Africa and the world – bullying. Why did you decide to address this specific topic?

Bullying happened to me when I moved to a new school and it inherently changed me. Before the age of nine I was a bubbly and carefree little girl but then people found it okay to bring me down at a time when I was trying to discover myself. The ramifications were enormous. I started to dress like a boy and it got to the point where I thought if I covered up and didn’t draw too much attention to myself, maybe it would stop. I developed low self-esteem and it took years and the encouragement from friends in high school for the real Shudu to emerge again. It was a matter close to my own heart and the book was a natural progression. I  hope that it helps teach children how to cope with bullying as well as about kindness and compassion and what it means to be a friend.

Shudu Finds her Magic celebrates and puts Gogo Gugu at the centre of the story. I love the description of Vho-Nwanzeru with her ‘face as wrinkled as a piece of crinkle paper’ and her ‘hands as brown as the village earth’, telling Shudu stories while grinding nuts for her ‘special pumpkin leaf dish’ – muroho-wa-thanga. Why was it important for you to represent Venda culture and food and the wisdom of an elder woman in the text?

This was my reality – the place I grew up and the people I lived among and who helped raise me. For me authenticity was key. Those who are living similar childhoods will recognise it but even if you aren’t growing up in a rural area I think you will find something you identify with in the book – family, friendship, sometimes feeling different are all universal themes.

It’s also a book about loneliness and the importance of friendships, and I’m sure the part where Shudu spends her school breaks in the library will resonate with many children. Why did you decide to share this painful time in your life?

It wouldn’t have been truthful if I hadn’t been totally honest in the telling of my story. I hope those reading it, who suffer what I did, realise they are not alone and that they will be able to see themselves reflected in the storyline and take something positive away from it. For me the writing process was also hugely cathartic.

There have been studies which show the wide benefits of children learning to read first in their home language. It also makes it easier for them to learn and speak a second language – for example English – in the future. A study released by the Association for Childhood Education International showed that young children who were exposed to age-appropriate books and literature in their own language developed stronger pre-literacy skills than children who were only exposed to books in a second language. Children deserve to read, or have read to them, books in their home language.

The artwork is incredibly beautiful – what is your favourite illustration in the book and why?

I have to give huge credit to Chantelle and Burgen Thorne who were responsible for the delightful and colourful illustrations. I love the picture of me pretending to be a beautiful princess with a crown of daisies. It captures the magic and innocence of childhood. I look at it and it takes me back to such a happy time.

I hope parents and families will share it with the youngsters in the household – whether they read it to the children or the children to them. I hope they discuss the messages in the book which was inspired by my own childhood and the bullying I experienced when I moved to a new province and a new school. The book is aimed at children between four and nine years of age and deals with bullying and the power of friendship. I hope that youngsters will be able to see themselves reflected in the storyline and be able to take something positive away from it. The one lesson I want to impart is that when something bad is happening to you it is important to speak about it to an adult that you trust. This could be a parent, a family member, a teacher or an elder. Remember that being bullied is not your fault; there is nothing wrong with you. Nobody should have to go through what I went through. Bullies also need help – they are often very unhappy which causes them to lash out in a cruel way to other people.

You speak a lot about self-worth and finding your place in the world, but it’s not easy, especially for girls. Where should we start to help them?

When I was crowned Miss South Africa, I decided to bring mental health into the spotlight and focus on the subject during the year of my reign. I think it was pertinent, not only because I had been through it myself, but because mental health issues worsened during the Covid-19 pandemic and lockdown. I am delighted that conversations have started but they need to continue in the home and at schools. We have to look at bullying which takes place on social media and give young girls tools to deal with it. People need to be kind. It took me a long time to realise that the bullying was actually never about me but about the people who were doing it.

What’s been your favourite moment in writing, publishing and sharing your story with South Africa’s children?

There have been so many – the achievement of doing it and seeing it come to fruition. Holding the first copy of my book in my hands. The reaction of South African public who have made it a bestseller. Visiting schools and reading the book to children. Being told that I have made a difference to one young child. I am the one who has been hugely blessed during this journey.